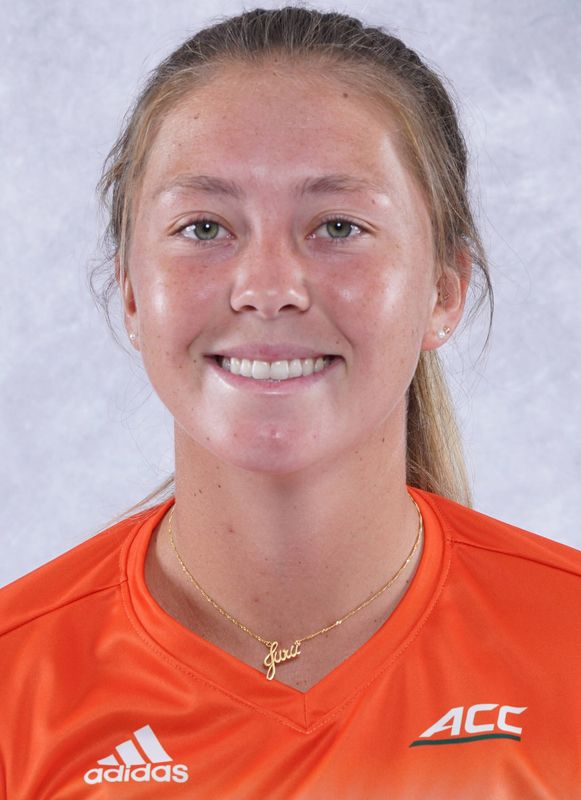 As a Sophomore at Iowa (2021-22): Went 7-2 in singles and 0-1 in doubles, all in the fall … Did not compete in the spring due to injury … Finished No. 29 in the nation in singles despite missing the entire spring … Ranked top-10 nearly the entire season and peaked at third in the country … Finished third in the ITA Central Region singles rankings … Both losses came to players who ended the year ranked top-four nationally, both of whom she also defeated … Went 5-1 versus ranked foes, including 2-0 against top-20 opponents, with a top-five win … Notched a 4-1 record in the ITA Women’s All-American Championships to reach the title match … Defeated No. 85 Gina Dittman of Northern Arizona, 6-3, 6-2, then topped No. 20 Valeriya Zeleva of UCF, 6-7 (6-8), 6-2, 6-1, followed by a 3-0, ret., victory against fifth-ranked Georgia Drummy of Duke and then a 6-0, 1-6, 6-3 decision versus No. 56 Eryn Cayetano of USC in the semifinals … Totaled a 3-1 mark at the ITA National Fall Championships, advancing to the semifinals … Defeated Princeton’s Victoria Hu, 6-2, 6-2, and then No. 88 Reilly Tran of North Carolina, 4-6, 7-5, 6-1, followed by avenging a loss to South Carolina’s Sarah Hamner, 6-0, 2-6, 7-6 (7-1), in the semifinals, before falling to Cayetano … Dropped her lone doubles match, 7-9, against No. 58 Marija Curnic/Iuliia Bryzgalova of Penn in the ITA Women’s All-American Championships Round of 32.

As a Freshman at Iowa (2020-21): ITA All-American (singles) … Big Ten Player of the Year … Big Ten Freshman of the Year … First Team All-Big Ten … Big Ten All-Tournament Team … ITA Central Region Rookie of the Year … USTA Collegiate Summer Team
No fall season due to COVID-19 pandemic … Finished 24-1 in singles and 13-6 in doubles … Notched a .960 singles winning percentage to rank fourth nationally …Won the first 24 completed matches of her career … Peaked at No. 13 in the ITA singles rankings and ended the year at No. 21 … First ITA All-American and first Big Ten Player of the Year in program history … Earned a No. 9-16 seed in the NCAA Singles Championship as the Big Ten’s automatic qualifier … Advanced to the NCAA Singles Championship Round of 32 … Led the team in all singles victories categories, as well as tied for third in doubles wins, dual match doubles wins and Big Ten doubles wins … Earned 15 consecutive straight-set singles victories and lost only seven sets all season … Went 4-1 in singles against ranked foes, including 2-0 against top-30 players … Recorded a 1-1 mark versus ranked doubles pairs … Finished 17-0 in dual match singles action, playing exclusively atop the singles lineup, and 16-0 in Big Ten competition … Earned the first singles victory of her career in the Purdue Invite, defeating Michigan State’s Mary Lewis, 6-3, 6-2 … In her first completed dual match, defeated Emilee Duong of Illinois, 6-2, 6-0 … Took down No. 57 Julie Byrne of eighth-ranked Northwestern, 6-4, 6-7, 1-0 (10-5), for her first ranked win … Tallied a 6-2, 6-2 decision over Irina Cantos Siemers of No. 10 Ohio State … Won, 6-2, 6-1, at Illinois against Asuka Kawai, a 2019 NCAA quarterfinalist … Logged a 6-2, 6-3 triumph over Maria Shusharina at eighth-ranked Northwestern … Defeated No. 88 Kristina Novak of No. 28 Nebraska, 6-1, 6-3 … Rolled to a 6-1, 6-2 result versus No. 30 Ayana Akli at Maryland … Posted a 6-0, 6-4 win over No. 44 Nebraska’s Kristina Novak in the regular season finale … Topped Irina Cantos Siemers of No. 13 Ohio State, 6-1, 6-2, in Iowa’s first Big Ten semifinal berth since 2010 … Beat No. 23 Alana Smith of NC State, 6-4, 4-6, 7-5, in the NCAA Singles Championship Round of 32 … Finished 8-5 in dual match doubles play, all atop the lineup, and went 8-4 in conference play … Amassed her first collegiate doubles victory in the Purdue Invite against Ayshe Can/Maja Pietrowicz, 7-5 … Notched her first dual match triumph with a 6-1 decision against Emilee Duong/Asuka Kawai of Illinois … Defeated No. 47 Julie Byrne/Hannah McColgan of eighth-ranked Northwestern, 6-2, for her first ranked doubles victory … Downed Ekin Ercetin/Rachel Hanford, 6-2, at Minnesota for her fifth win in six outings … Took down Julie Byrne/Briana Crowley, 6-3, at eighth-ranked Northwestern … Registered a 7-6 victory over Maja Makoric/Kristina Novak of No. 44 Nebraska in the regular season finale.

Prior to College: Peaked at fourth in the world in the ITF Juniors rankings in January 2020 … Went 28-7 in ITF Juniors tournaments … Ascended as high as No. 794 in the WTA rankings in February 2020 … Won her first professional tournament, competing as an amateur, at the $15K ITF Cancun in February 2020 … Played in the 2019 U.S. Open doubles main draw alongside Abbey Forbes … Competed in all four Junior Grand Slams … Reached the Wimbledon Juniors singles final in 2019, one year after making the Round of 32 in singles and the quarterfinals in doubles … Competed in the U.S. Open Girls tournament in singles and doubles in 2019 and 2018, reaching the Round of 16 in singles in her second appearance and making the quarterfinals in doubles both times … Made the French Open Girls singles Round of 32 in 2019 and the French Open Girls doubles quarterfinals in 2018 … Reached the Australian Open Girls Round of 16 in both singles and doubles in 2018 … Won the 2019 USTA U18 National Championships doubles title … Also in 2019, reached G1 singles finals in Roehampton and Barranquilla, while winning a GA tournament in Milan … Represented the United States at the Buenos Aires youth Olympic Games in 2018 and won the Junior Fed Cup in Budapest the same year … Won the G1 Astrid Bowl in Belgium both singles and doubles in 2018 … Made the finals of both the GB1 Easter Bowl in Indian Wells, Calif., and the G1 Banana Bowl in Porto Alegre, Brazil, in 2018 … Excelled in multiple tournaments in Mexico in 2017, winning the G1 XXXI Yucatan Cup in singles and reaching the final in doubles, while also winning the GA Abierto Juvenil Mexicano crown.

Personal: Full name is Alex Juree Noel … Last name is pronounced NOLE … Born Sept. 6, 2002 … Parents are Brett Noel and Juree Anothayanontha-Noel … Has a younger sister, Julia … Intends to major in sociology … Favorite athlete is Kobe Bryant because of how inspiring he is … Best sports memory is raising her Wimbledon Juniors plate in the Royal Box on Centre Court … Chose Miami because of its strength in both academics and tennis.

! = at University of Iowa
*RNK = record vs. ranked opponents