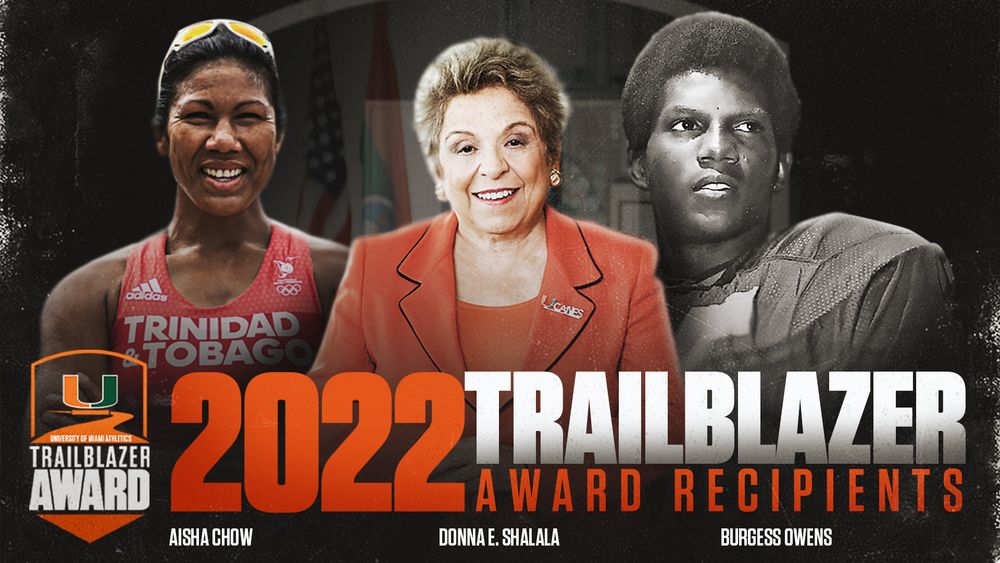 Miami Athletics launched the award in 2021 to honor and recognize current and former student-athletes of color and others affiliated with athletics who have distinguished themselves as pioneers and game changers in sports and life. The award originates from the Diversity and Inclusion unit within the athletic department.

“We are proud to recognize Aisha, Burgess and Donna with our 2022 Trailblazer Award,” Vice President/Director of Athletics Dan Radakovich said. “They have all distinguished themselves with their pioneering spirit and commitment to public service, and we are thankful for everything they have done—and continue to do—for the University of Miami.”

The University will recognize Chow, Owens, and Shalala throughout the month of February as part of its Black History Month initiatives.

“We are excited and honored to recognize these trailblazing Canes with the University of Miami Athletics Trailblazer Award,” said Dr. Renae Myles Payne, Senior Associate Athletic Director for Administration and Chief Diversity Officer. “It’s important for us to share their stories so we can continue to educate everyone on the historical impact they have made on our athletic department, our University, and our community.”

Chow competed on the University’s rowing team from 1995-99, arrived at Miami on an academic scholarship before trying out rowing as a novice. She quickly found success and was thrust into the top varsity boat as a freshman. Chow helped the Hurricanes excel at notable regattas, including Head of the Hooch, and helped the team become one of the top programs at the Florida Intercollegiate Rowing Association Championship. As a junior, Chow was part of the U’s varsity eight that won a title at the Southern Intercollegiate Rowing Association championship in 1997-98. Chow later competed in two Summer Olympics for Trinidad & Tobago—Rio in 2016 and Tokyo in 2020—becoming the first Olympic rower in her country’s history.

After graduating from Miami, Chow earned her Ph.D. in pharmacology from Duke University. For the past 16 years she has worked for FibroGen, Inc., first as a research scientist and now as associate director of cell biology, where she is the program lead for one of FibroGen’s pre-clinical molecule oncology programs.

Owens was a stellar defensive back for the Hurricanes from 1970-72. He amassed 160 career tackles, eight interceptions and three fumble recoveries, earning first-team All-America honors as a senior. He was named Defensive MVP of the Senior Bowl before getting selected by the New York Jets with the 13th overall pick of the 1973 NFL Draft—one spot behind teammate Chuck Foreman. He earned his bachelor’s degree from UM in biology with a minor in chemistry.

Owens played seven seasons for the Jets before moving on to the Raiders, where he played three seasons and was a member of Oakland’s Super Bowl XV winning squad. He was the first Black student-athlete inducted into the University of Miami Sports Hall of Fame.

In 2020, Owens was elected to national office, capturing the U.S. House of Representatives seat in Utah’s fourth congressional district. He is also founder, board member, and CEO of Second Chance 4 Youth, a nonprofit he founded in 2019 dedicated to helping troubled and incarcerated youth.

While on leave from the University, Shalala served as president of the Clinton Foundation from June 2015 to March 2017. In 1993 President Bill Clinton appointed her U.S. Secretary of Health and Human Services (HHS) where she served for eight years, becoming the longest serving HHS Secretary in U.S. history. At the end of her tenure, a Washington Post article described her as “one of the most successful government managers of modern times.” In 2008 the Council on Excellence in Government named Shalala one of the greatest public servants of the past 25 years. In 2011 she was inducted into the National Women’s Hall of Fame in Seneca Falls, New York, and in 2014 she was recognized by the Harry S. Truman Library with the Harry S. Truman Legacy of Leadership Award and received the Greater Miami Chamber of Commerce’s highest honor, the Sand in My Shoes Award, for her significant contributions to the community.

Shalala most recently served as a member of the U.S. House of Representatives from Florida’s 27th congressional district. 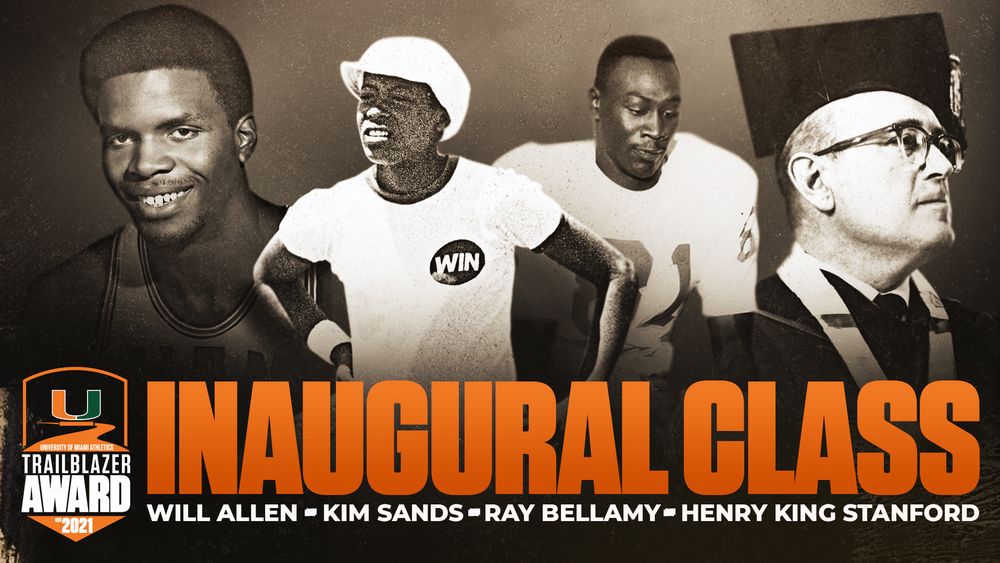 Miami Athletics launched the award to honor and recognize current and former minority student-athletes and others affiliated with athletics who have distinguished themselves as pioneers and game changers in sports and life. The award originates from the Diversity and Inclusion unit within the athletic department.

The University recognized Allen, Bellamy, Sands and Stanford throughout the week of Feb. 15 as part of its Black History Month initiatives. Allen, Bellamy, and Sands participated in a student-athlete panel discussion and appeared on an episode of the “Behind the U” podcast. All four honorees were also highlighted during the Hurricanes’ men’s basketball game versus Georgia Tech on Feb. 20.

“We are thrilled to honor these trailblazing Canes with the first University of Miami Athletics Trailblazer Award,” said Renae Myles Payne, Senior Associate Athletic Director for Administration and Chief Diversity Officer. “It’s important for us to share their stories and sacrifice so we can continue to educate everyone on their significance to the overall history of our athletic department.”

Allen played basketball at Miami from 1967-71, the first Black scholarship athlete in program history. After playing on the freshman team in 1967-68, he joined the varsity team as a sophomore center and ranked second on the team in both scoring (14.7 points per game) and rebounding (11.7 rebounds per game). As a junior, Allen averaged 17.5 points and 12.3 rebounds per game. In his senior season, Allen paced the team with 19.1 points and 12.2 rebounds per game, concluding his Hurricanes career with the sixth most career points in program history. His 916 career rebounds still rank second on Miami’s all-time list. In 2010, he was named Miami’s Atlantic Coast Conference Legend and in 2016 he was inducted into the University of Miami Sports Hall of Fame.

Allen graduated with a Bachelor of Arts in Physical Education and was drafted in the fourth round of the NBA Draft by the Baltimore Bullets. He chose instead to play for the Miami Floridians of the American Basketball Association, and overseas in Belgium. Allen has since become one of the world’s preeminent practitioners of urban agriculture, founding Growing Power. He was named a 2008 MacArthur Foundation Fellow and in 2010, Time magazine named him to its list of “The World’s 100 Most Influential People.” Allen was the 2011 recipient of the NCAA’s Theodore Roosevelt Award and was enshrined in its Hall of Champions. He received an honorary Ph.D. in Agriculture from the University of Miami in 2012.

Bellamy, who played wide receiver for the Hurricanes from 1967-70, was the first Black football scholarship athlete at the University, as well as the first in the Southeast. After setting records on the freshman team, Bellamy caught 37 passes for 549 yards and two touchdowns as a sophomore on the varsity squad. He caught eight passes for 163 yards and one score as a junior before injuries from a car crash cut his football career short.

Sands was the first Black female scholarship athlete at Miami, playing one season of basketball and four seasons of tennis. She then embarked on a 10-year career on the WTA Tour, where she rose as high as No. 44 in the world singles rankings and No. 31 in the world doubles rankings. She twice advanced to the second round at Wimbledon and advanced to the second round of the French Open three times.

Sands returned to UM as head coach of the women’s program in 1990. In her eight seasons as head coach the Hurricanes posted a 102-76 record, winning five BIG EAST titles and advancing to the NCAA Tournament five times, including a Sweet 16 appearance in 1991. Sands was a four-time BIG EAST Coach of the Year.

Stanford was the third president in University history, serving from 1962-81 and guiding the University through a period of sweeping change and expansion. He tripled the size of the faculty during his tenure and increased federal research funding by 700 percent. He was remembered for orchestrating larger roles for faculty and students in University governance and championing minority rights and representation, which included helping United Black Students (UBS) gain formal recognition on campus in 1967. The University of Miami Libraries Cuban Heritage Collection presents the Henry King Stanford Award annually in his honor.

Before arriving in Coral Gables, Stanford was president of Birmingham Southern College (1957-62), Georgia State College for Women (1953-56) and Georgia Southwestern College (1948-50). After retiring from the University of Miami he served as interim president of the University of Georgia from 1986-87. Stanford passed away in 2009 at the age of 92. His daughter, Rhoda Stanford McCabe, is accepting the Miami Athletics Trailblazer Award in his honor.