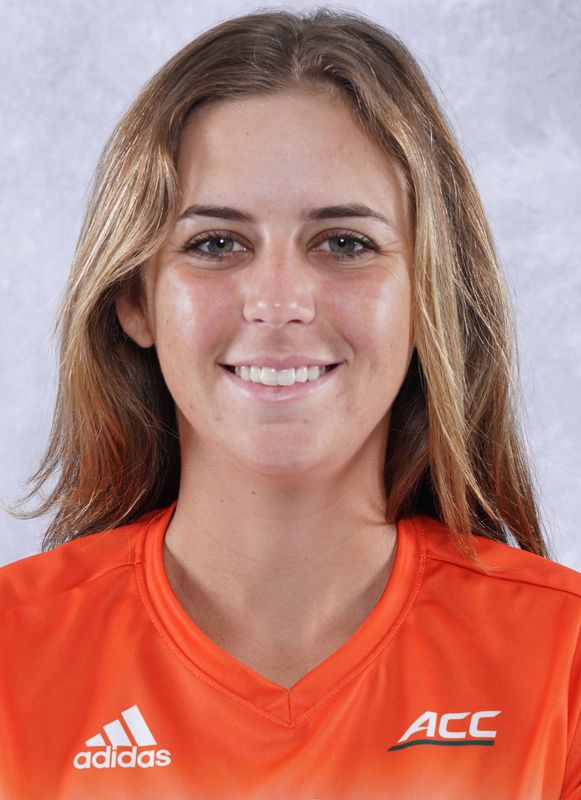 As a Sophomore (2021-22): All-ACC Academic Team … ITA Scholar-Athlete
Finished 29-10 in singles and 17-10 in doubles … Peaked at No. 36 in the ITA doubles rankings alongside Diana Khodan … Earned her first ranked singles win … Paced Miami in overall singles winning percentage (.744) and spring singles winning percentage (.800), plus tied for the lead in overall singles wins … Finished second on the team in combined singles/doubles winning percentage (.697), spring singles victories (20), ACC singles winning percentage (.727) and ACC doubles winning percentage (.667), while tying for second in dual match singles victories (17) and ACC singles victories (eight) … Placed third in combined singles/doubles victories (46), dual match singles winning percentage (.773) and tied for third in both spring doubles victories (13) and dual match doubles victories (12) … Went 20-5 in spring singles competition, including 17-5 in dual matches and 8-3 in ACC play, splitting time between the No. 4 and No. 5 positions … Tallied a 9-0 mark in a 10-match stretch from 3/27 through 5/7 … In the Miami Spring Invite, topped No. 117 Malaika Rapolu of the eventual NCAA champion, Texas, 7-6 (7-5), 6-2, for her first ranked victory … Beat No. 15 USC’s Sloane Morra, 7-6 (8-6), 6-4, at the No. 4 spot … Registered a 6-3, 7-5 decision against No. 61 Florida State’s Anna Arkadianou at the No. 4 position … Posted a 6-1, 6-0 victory over Hibah Shaikh at No. 11 Virginia … Earned a perfect 6-0, 6-0 win against Margaryta Bilokin of No. 10 Duke … Topped Gia Cohen of No. 32 Georgia Tech, 6-0, 6-4, in the ACC Championship quarterfinals … Beat Margaryta Bilokin, 6-3, 7-5, of fifth-ranked Duke in the ACC semifinals … Downed No. 61 Stetson’s Noa Cohen, 6-1, 6-2, to clinch an NCAA Team Championship first-round win … Took down No. 21 UCF’s Nandini Sharma, 6-4, 6-1, to clinch the NCAA Round of 32 victory … Finished 13-7 in spring doubles action, including 12-6 in dual matches and 4-2 in ACC play … Played exclusively at the No. 3 position alongside Isabella Pfennig … In the Miami Spring Invite, defeated Gabby Cusano/Simran Kortikere of Texas, the eventual national champion … Topped Sloane Morra/Danielle Wilson of No. 15 USC, 6-1 … Recorded a 6-1 victory over No. 17 Old Dominion’s Marina Alcaide/Shahar Biran … Won, 6-0, against Anique Kattenberg/Noel Saidenova of No. 19 UCF … Earned a second straight 6-0 triumph by beating Gia Cohen/Ruth Marsh of No. 47 Georgia Tech … Beat Saby Nihalani/Peyton Pesavento, 6-1, at No. 15 Wake Forest … Logged a 6-2 decision versus Elaine Chervinsky/Natasha Subhash at No. 11 Virginia … Downed Kelly Chen/Georgia Drummy of No. 10 Duke, 6-3 … In the NCAA Team Championship Round of 64, defeated No. 61 Stetson’s Noa Cohen/Anais Gabriel, 6-1 … Amassed a 9-5 record in fall singles play … Went 1-3 in the Fall Ranked Spotlight, defeating NC State’s Amelia Rajecki, 6-2, 6-2, for her first win as a Hurricane … Tallied a 3-0 record in the June Stewart Invitational, including beating Yufei Long of host Vanderbilt, 6-3, 7-5 … Posted a 3-2 mark in the ITA Southeast Regional Championships, including beating USF’s Amelie Boy, 6-0, 6-1, in the consolation quarterfinals … Finished 2-0 in the Miami Fall Invite, including logging a win over Duke’s Margaryta Bilokin, 6-4, 6-2 … Compiled a 4-3 fall doubles record, all with Pfennig … Totaled a 2-1 mark in the June Stewart Invitational, including defeating Kentucky’s Maialen Morante/Florencia Urrutia, 6-2 … Went 1-1 in the ITA Southeast Regional Championships … Registered a 1-1 record in the Miami Fall Invite, taking down Kentucky’s Carla Girbau/Florencia Urrutia, 6-2.

Personal: Full name is Audrey Sidney Boch-Collins … First part of last name is pronounced BOSH … Born June 8, 2001 … Parents are William Collins and Connie Boch … Father is a landscaper and mother is a nurse … Does not have any siblings … Great-grandfather played for the NFL’s Brooklyn Dodgers in the 1940’s … Grandfather played college football at Syracuse … Majoring in criminology with a minor in political science … Enjoys baking and cooking … Favorite athlete is Formula One driver Daniel Ricciardo because of his work ethic, humility and humor … Best sports memory is breaking a tie to lead her team into the state tournament as a senior … As a match superstition, eats the same breakfast each day during a tournament … Chose Miami because of the atmosphere, the beautiful campus and the quality education … Committed to Miami over UC Santa Barbara, Nebraska, Oregon, and Texas A&M.