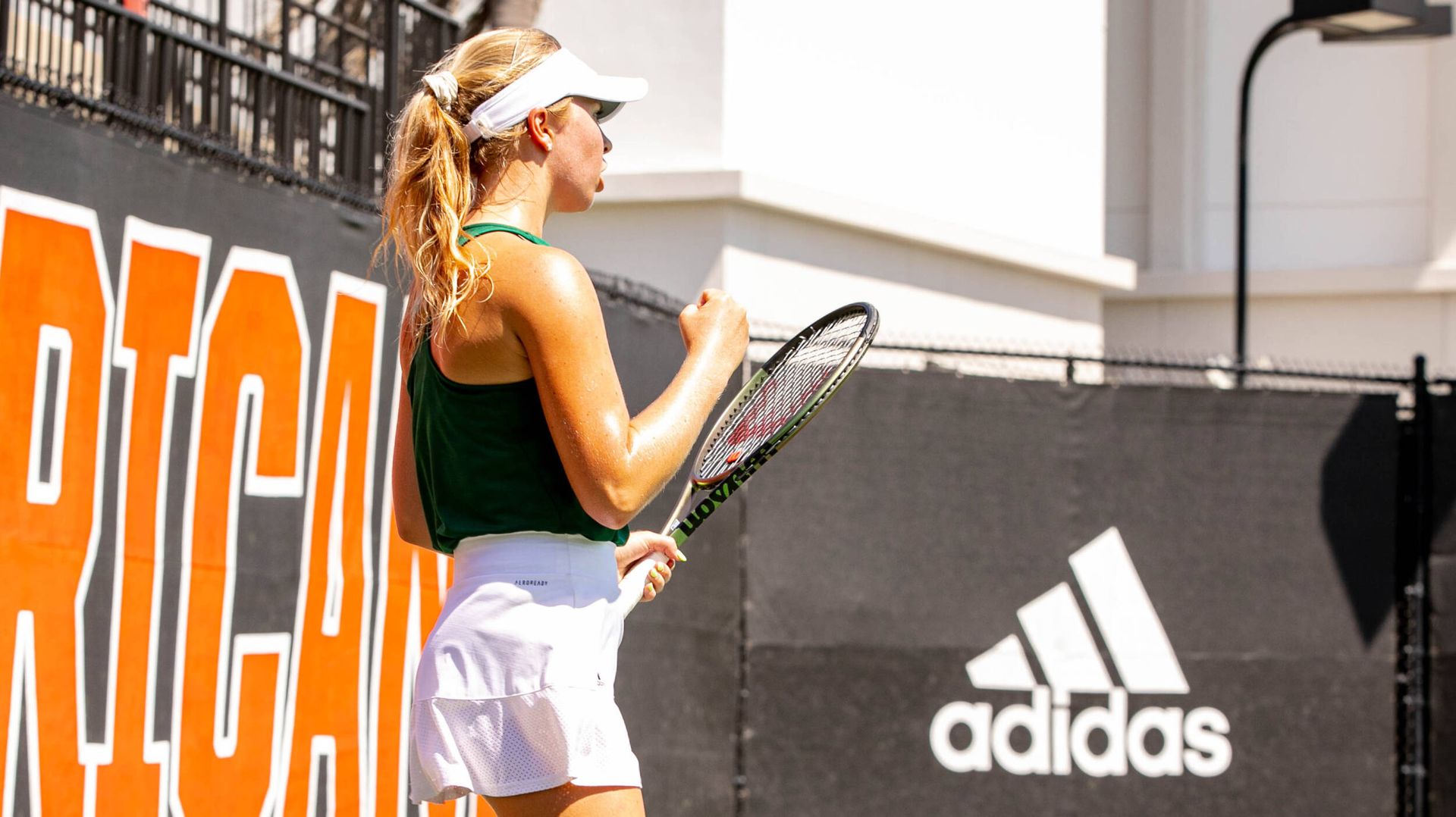 CHARLOTTESVILLE, Va. – Eden Richardson turned in one of the most impressive victories in the storied history of University of Miami women’s tennis Sunday at No. 11 Virginia.

The fifth-year senior shocked Emma Navarro, the reigning NCAA champion, in straight sets and, in doing so, clinched the win for No. 10 Miami (11-2, 6-1 ACC) at the Virginia Tennis Facility at the Boar’s Head Resort.

The Hurricanes tacked on two more points to register a second third straight 6-1 triumph, including its second in three days in Virginia. Miami now has four top-20 wins, including two on the road in ACC play.

“These kids are playing ball,” Miami head coach Paige Yaroshuk-Tews said. “I’m so proud of how we’re playing for each other, for this school and for something bigger than simply our own performances. The mindset is paying dividends right now.”

Virginia (11-4, 3-3 ACC) took the opening doubles match, as Navarro and Hibah Shaikh earned a 6-2 victory over the Hurricanes’ No. 16-ranked duo of Richardson and fourth-year junior Daevenia Achong.

However, just as it did two days prior against Virginia Tech in Blacksburg, Va., Miami responded. First, in a top-75 affair, third-year sophomores Diana Khodan and Maya Tahan, ranked No. 72, tallied a dominant 6-0 victory against No. 73 Sofia Munera and Amber O’Dell to even the ledger.

Sophomores Audrey Boch-Collins and Isabella Pfennig then earned the point for the Hurricanes by winning the final three games of their match against Elaine Chervinsky and Natasha Subhash to record a 6-2 decision.

The two who sealed the doubles point also earned the second and third tallies for Miami. First, Boch-Collins cruised to a 6-1, 6-0 victory against Shaikh. Four minutes later, No. 112 Pfennig finished off a dazzling 6-2, 6-2 showing against No. 26 Subhash for a top-30 triumph.

No. 58 Richardson tallied the clinching point for the Hurricanes with one of the most impressive performance in the rich history of the program.

Facing fifth-ranked Navarro, who also places No. 200 in the WTA rankings, Richardson jumped out to a 4-0 lead in the opening set and never looked back. She took the first set in nine games and then, after dropping the first game of set two, won each of the next three to gain full control.

Navarro never surpassed her first-set game total, as Richardson went on to take a 6-3, 6-3 decision, finishing it with a break off a strong return that led to an unforced error. The loss is just the second of Navarro’s spectacular career, as she entered the day at 36-1 as a collegian.

Her lone prior setback was also against Miami, as she dropped a 6-1, 4-6, 3-6 decision to Estela Perez-Somarriba on April 4, 2021. Sunday marked the first home loss and first straight-set loss of her illustrious career, which included 22 straight victories since falling to Perez-Somarriba, the 2019 NCAA champion.

“Eden played some incredible tennis today,” Yaroshuk-Tews said. “She executed the big points and believed she could get the job done against a great player on the road.”

The Cavaliers put their lone point of the day on the board in the next match, as Sara Ziodato defeated Khodan, 4-6, 6-2, 6-4. Tahan then ended the contest by recording a 7-5, 7-5 decision versus Munera to make it a 6-1 final score.

The Hurricanes improved to 20-6 all-time against Virginia, including 6-3 on the road. It is the first time Miami has won in Charlottesville since April 23, 2017, as the Hurricanes lost in 2018 and the 2020 match was canceled due to COVID-19.

This is the third consecutive win for the Hurricanes against Virginia, all of them with the Cavaliers ranked in the top 20, including the last two with them in the top 11.

Up next for Miami is a matchup with the top-ranked team in the nation, North Carolina, Friday at 5 p.m. at the Neil Schiff Tennis Center in Coral Gables, Fla.