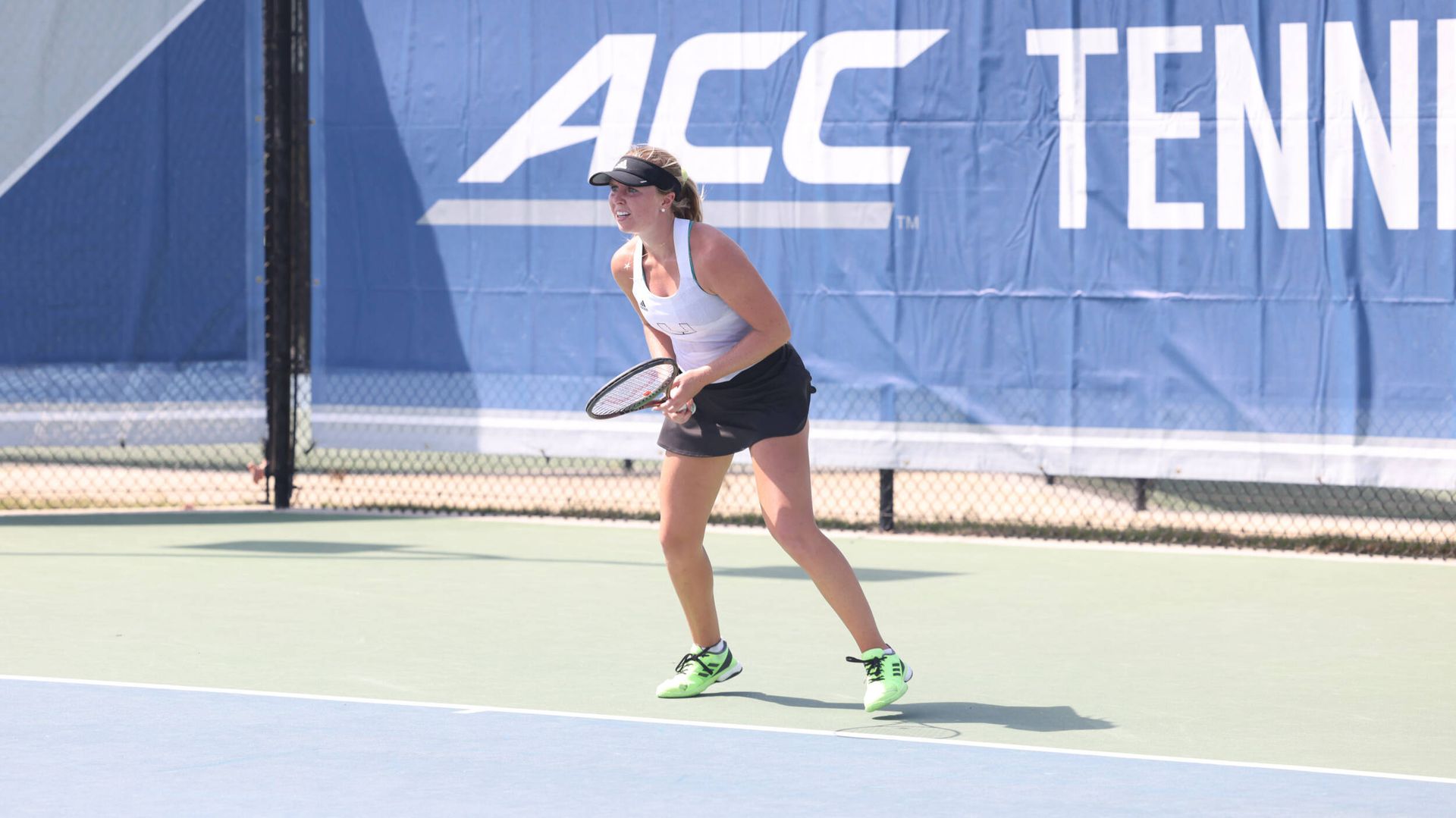 No. 13 Miami (17-5, 10-3 ACC) won five opening sets in singles after dropping the doubles point, but fifth-ranked Duke (18-3, 11-2 ACC) won two three-setters, including the final one in a lengthy tiebreaker, to reach the title match.

“Good tennis match. Obviously, not perfect,” Miami head coach Paige Yaroshuk-Tews said. “They played a little bit better than us in the big moments and that’s why they walk away with the match. I give credit to Duke. They played a great match, they played aggressive, they played well when they were down and they deserved the victory.”

The Blue Devils got on the board first in doubles, as No. 27 Chloe Beck and Ellie Coleman notching a 6-2 decision over freshman Tatyana Nikolenko and third-year sophomore Maya Tahan.

Focus then shifted to Court 3, where Margaryta Bilokin and Eliza Omirou closed out a 6-3 result versus sophomores Audrey Boch-Collins and Isabella Pfennig to give Duke the opening point.

The Hurricanes got off to a fast start in singles, taking the opening game on each court and grabbing full command in nearly every contest. They won the first set in Courts 1 through 5 to put them in position to make a run at a comeback for the second day in a row.

Then, No. 51 Richardson finished off an impressive 6-1, 7-5 win over eighth-ranked Beck, who entered the day 19-0 in dual matches this season. The Bath, England, native faced a 3-5 second-set deficit, but won each of the last four games, including staving off three set points in the 10th game, to earn her second top-10 win of the spring.

It did not take long for Duke to tie the score, as Ellie Coleman beat Nikolenko, 6-4, 6-1. She took 12 of the final 13 games after dropping each of the first four.

Boch-Collins equalized for the Hurricanes approximately 25 minutes later by posting a 6-3, 7-5 triumph over Bilokin. The Las Vegas native watched her 5-2 second-set lead become a 5-5 deadlock, but took the final two games to make it 3-3.

“Look, we had some really bright spots in our match some. Eden played the best match I’ve seen her play, better than when she played Emma Navarro,” Yaroshuk-Tews said. “Bella was just crushing it. This isn’t because they won. Daev played a solid match, let the match get away from her, got a little complacent at the wrong time and then the vibe of the match kind of changed. Boch, once again, just stepping up and being rock-solid for us.”

All eyes turned to Court 4 where, moments after Boch-Collins won, Tahan grabbed a 4-1 third-set edge on No. 100 Chen. After dropping back-to-back games, she held to take a 5-3 advantage, but could not close it out.

Chen, a four-time ITA All-American and 2019 NCAA Singles Championship semifinalist, won three games in a row to pull ahead, 6-5. Tahan countered back with a hold to force a tiebreaker.

The Tel Mond, Israel, native went ahead 2-0 and 4-3 in the tiebreaker, but Chen then won three straight points to go up, 6-4. Tahan battled off back-to-back overall match points to keep Miami’s hopes alive, yet Chen took the next two points to seal a 3-6, 6-4, 7-6 (8-6) decision and send Duke to the title match.

The contest ended at 5:50 p.m., over 50 minutes after Boch-Collins’ match finished. It marked the second day in a row the Hurricanes played a match that lasted over three hours and 45 total minutes between the start of doubles and the end of doubles.

“We are trying to crack into the top eight on a consistent basis and not fall out of that spot, stay there and hold and be a top-eight team in the country, for many reasons. Effort shouldn’t even be discussed and, quite honestly, it shouldn’t even be applauded,” Yaroshuk-Tews said. “Making the right decisions, taking actions and making the right moves in big moments are some things that will separate a team that is 13 in the country from a team that is five in the country. We have to be willing to take action in big moments. When you’re tired, when you’re a little nervous and when the match is on the line, we have to take action and we have to play our tennis. Once we start doing that from top to bottom, we’ll make that jump.”

Miami will now await its postseason bracketing for the its soon-to-be 26th consecutive appearance in the NCAA Team Championship, with the field set to be announced May 2.