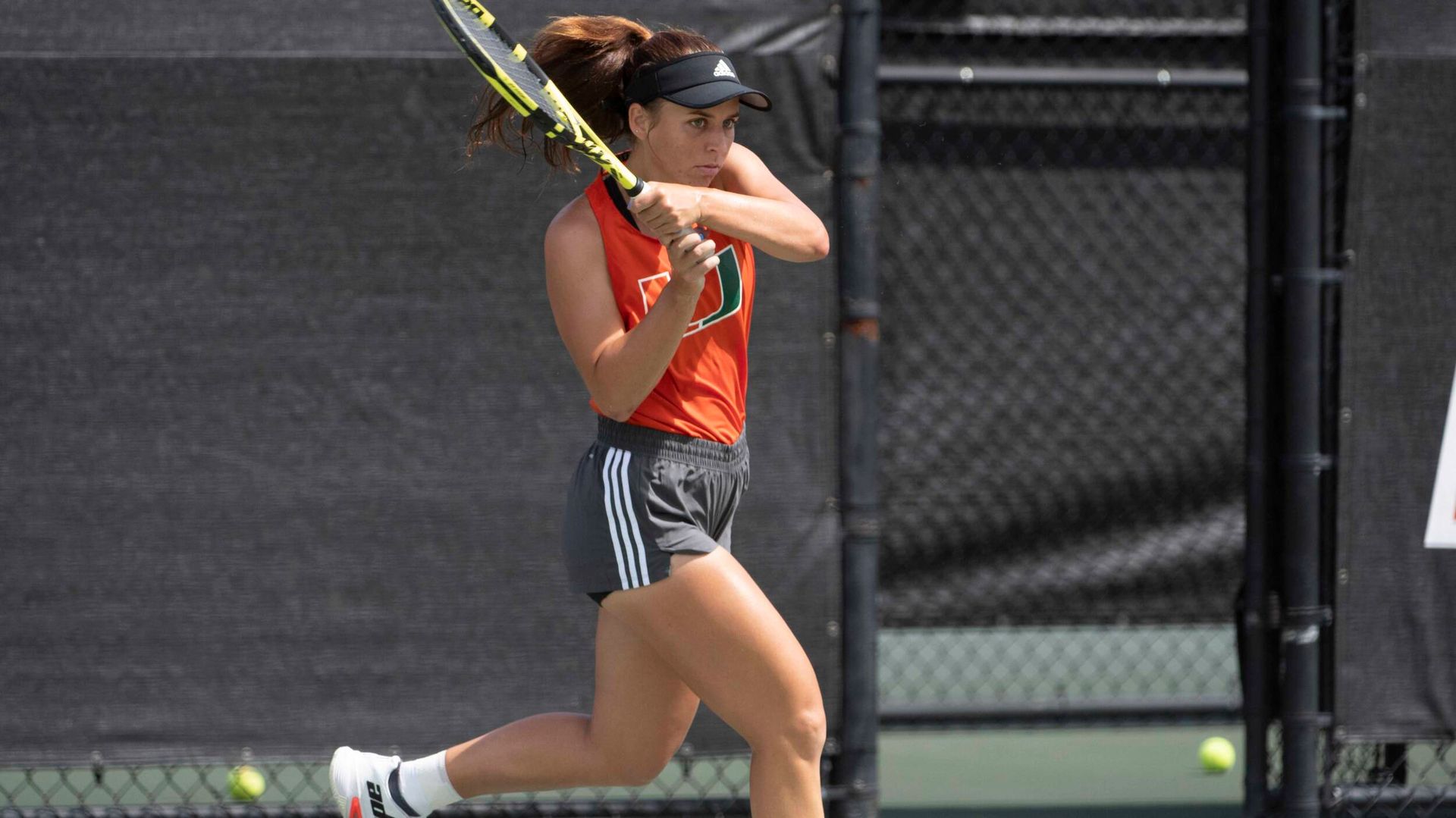 NASHVILLE, Tenn. – With all its scholarship players competing at the same event for the first time this fall, the University of Miami women’s tennis team turned in a stellar performance at the June Stewart Invitational.

The Hurricanes went 14-6 in singles and 7-2 in doubles against opponents from Kentucky, Illinois, Iowa State and host Vanderbilt over three days of action at the Currey Tennis Center. Overall, seven Miami players combined to finish 21-8.

“We competed well this weekend, especially on the last day of the tournament, winning some hard-fought three-setters in singles. I think that says a lot about our character as a team,” Miami head coach Paige Yaroshuk-Tews said. “Of course, we still have many things to work on. We’ve started to blend better as a team and understand each other and we’re having fun while doing it. We had a fun weekend and got better.”

Miami started play with a perfect showing Friday, sweeping its six singles matches against Kentucky and its three doubles matches versus Illinois. Half the singles wins came in straight sets, while the other three took a decisive third to go Miami’s way.

The Hurricanes went 3-4 in singles action Saturday, finishing 2-3 against Vanderbilt and 1-1 versus Iowa State. Then, for the second day in a row, Miami swept its doubles matches, this time posting a trio of wins over Kentucky to go an unblemished 9-0 on the weekend against the Wildcats.

Sunday, on the final day of action, Miami returned to its dominance in singles competition, notching a 5-2 ledger that included a 5-1 mark versus Illinois and a loss in the lone outing against Iowa State. The team concluded the weekend by tallying a 1-2 doubles mark against Vanderbilt.

The lone doubles win over the Commodores was a ranked one, though, as third-year sophomores Diana Khodan and Maya Tahan logged a 6-4 decision over No. 47 Marcella Cruz and MaryAnn Rompf.

Khodan turned in a perfect 3-0 singles record on the weekend and she paired it with an equal 3-0 ledger in doubles alongside Tahan, with whom she made the 2021 NCAA Doubles Championship. The Ivano-Frankivsk, Ukraine, native won all three of her singles matches in straight sets, including cruising past Illinois’ Kida Ferrari, 6-3, 6-0 on the final day of action.

Sophomore Audrey Boch-Collins also impressed all weekend for Miami, claiming wins in all three of her singles matches, while notching a pair of doubles victories alongside sophomore Isabella Pfennig.

One of Boch-Collins’ triumphs was a 6-3, 7-5 result against Vanderbilt’s Yufei Long, a two-time All-ACC honoree during her time at Boston College.

Up next for the Hurricanes is a trip to nearby Orlando, Fla., where Miami will compete in the ITA Southeast Regional Championships, slated for Oct. 14-18 at the USTA National Campus.