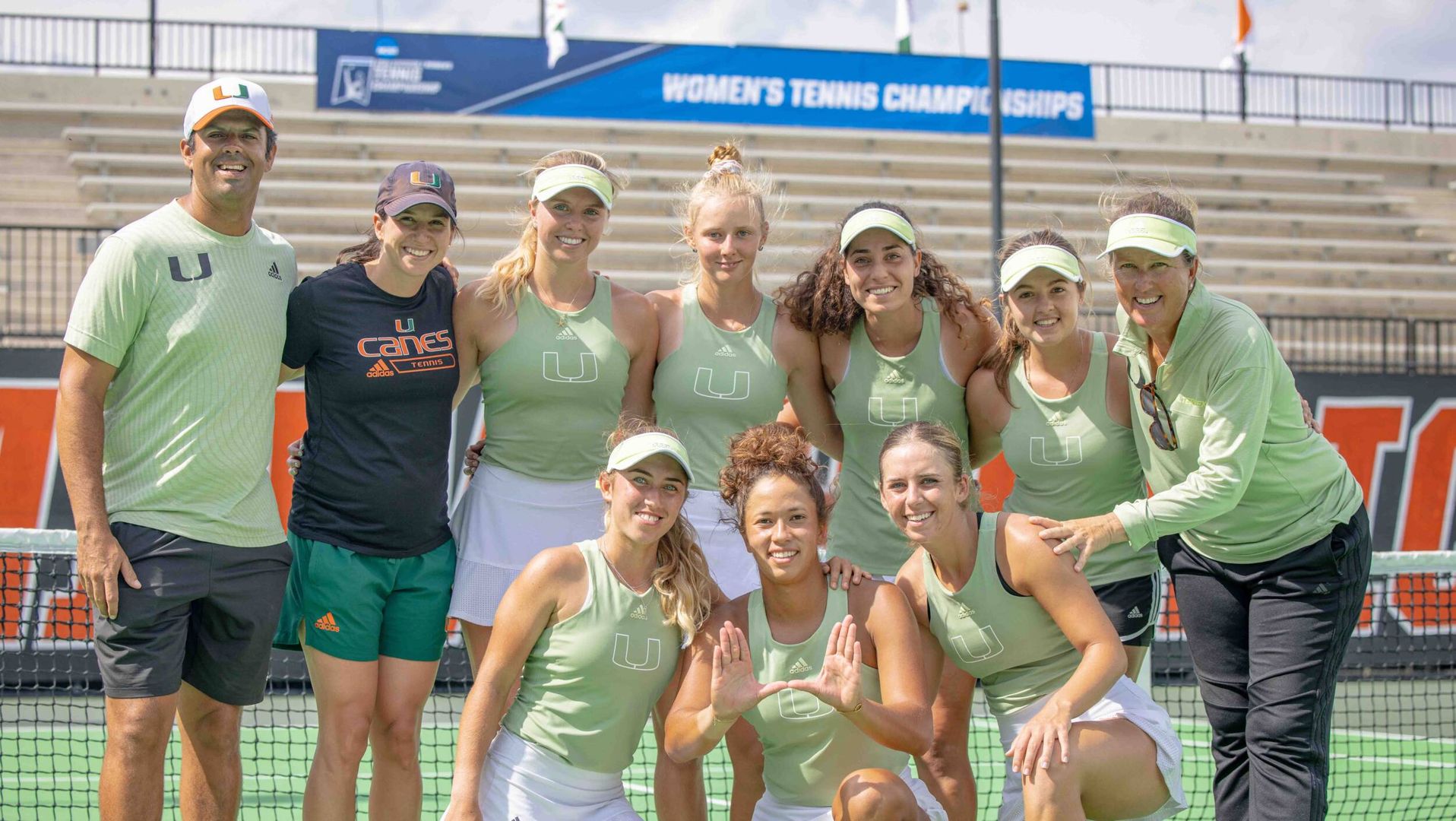 Ninth-ranked and ninth-seeded Miami (19-5, 10-3 ACC) dropped the doubles point, but turned in a spectacular showing in singles to beat the Knights at the Neil Schiff Tennis Center for the second time this season.

The Hurricanes are now headed to the Sweet 16 for the 24th time in program history, the ninth-most of any program, including the 14th time in the last 18 completed seasons and 13th in the past 16.

“Honestly, this is such a cool group. To be able to do it with this group is just [truly awesome],” Miami 21st-year head coach Paige Yaroshuk-Tews said. “They’re just fun. They’re so enjoyable and they’ve earned this. Sometimes you earn it all year and it doesn’t work out, but this year it does. So, let’s enjoy it.”

The Hurricanes pulled even in doubles in a top-50 matchup, as fourth-year junior Daevenia Achong and fifth-year senior Eden Richardson, ranked No. 13, posted a 6-3 triumph over No. 48 Evgeniya Levashova and Marie Mattel.

Miami sophomores Audrey Boch-Collins and Isabella Pfennig, after rallying from a 30-40 deficit in back-to-back games, held a 5-3 lead on Jaleesa Leslie and Noel Saidenova in the decisive match and retained a 5-4 margin—after dropping a match point—when all eyes turned to Court 3. The Knights, though, pulled ahead, 6-5, and then had a match point in the next game, which Miami fought off to force a tiebreaker.

After UCF took a 6-1 cushion, the Hurricanes battled off two more match points, but no more. Leslie and Saidenova took a 7-6 (7-3) win to give the Knights the doubles point after 63 minutes of action.

In singles, Nikolenko turned in a dominant performance to level the score at one apiece. She won nine consecutive games on the way to a resounding 6-1, 6-1 victory over Biolay.

Several minutes later, No. 33 Achong gave Miami a lead it would not relinquish, as she finished off a 6-1, 6-4 triumph against Saindenova. It marked her second such straight-set head-to-head win of the year.

The Hurricanes eventually got their next two wins in a span of seconds with simultaneous match points. First, No. 37 Richardson completed a 7-6 (7-3), 6-1 victory over Levashova to extend the edge to 3-1.

Then, for the second day in a row, Boch-Collins clinched the match. The Las Vegas native beat Sharma, 6-4, 6-1, to send her team to the second weekend of the NCAA tournament.

“I’m so proud of proud of them. Coming off a tough doubles point, I sensed them a little down,” Yaroshuk-Tews said. “I didn’t really know how we were going to start in singles—I sensed some nerves—but we got through it early. We played the way we needed to play in the big moments and we’ve really been doing that all year. So, to be able to do it today against a physical team [is impressive]. We win a lot of matches because we’re more physical, but when you’re playing a UCF team that’s from the state in this weather, it’s kind of a little bit of a neutralizer. They’re also a very physical team. For us to do this, I’m just so proud of them.”

In addition, the Hurricanes improved to 3-4 when losing doubles this season. Each of the last three NCAA tournament matches between Miami and UCF—2018, 2021 and 2022—has featured the home team lose the doubles point and win the match to earn a Sweet 16 bid.

The Hurricanes now face either eight-ranked and eighth-seeded Pepperdine in the Sweet 16 in Malibu, Calif., or No. 19 USC in Coral Gables. The match will either be Friday or Saturday.