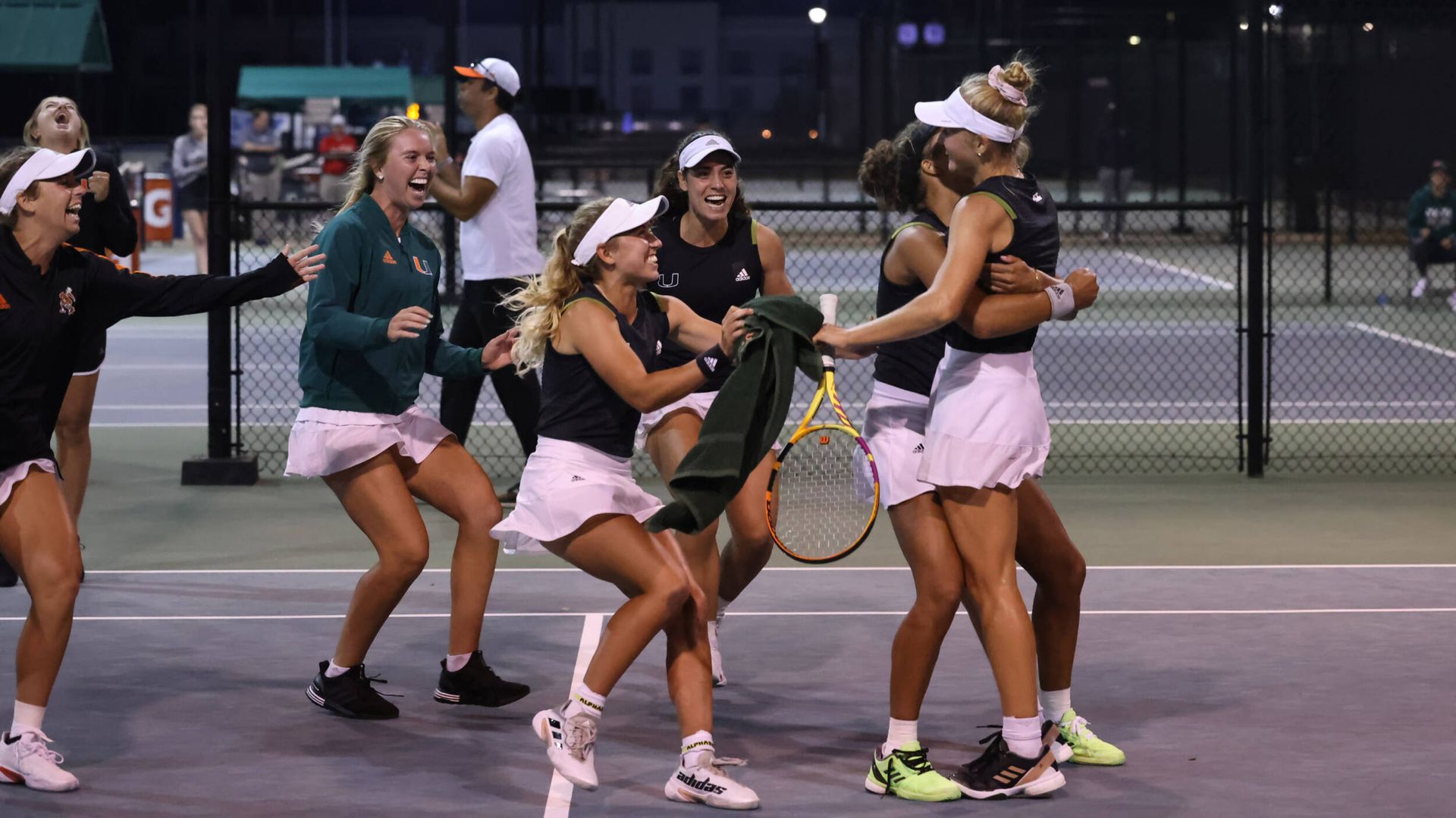 Following a 55-minute delay at the Rome Tennis Center at Berry College, the Hurricanes needed nearly four full hours to complete the victory. Once done, they poured on to Court 6 in jubilation following freshman Tatyana Nikolenko’s thrilling tiebreak clincher.

“[We were] just tough when we were down. Even though we weren’t down the whole match, it seemed like we were,” Miami head coach Paige Yaroshuk-Tews said. “We kind of had our tails handed to us in doubles and they go out and start rolling us on Court 1. I didn’t know what the score was of the match [because the scoreboards were all broken]. I think, all around, it was a tough match. I don’t think the girls really knew what was going on the entire match, but we hung in there. We knew we had winnable matches on every court.” 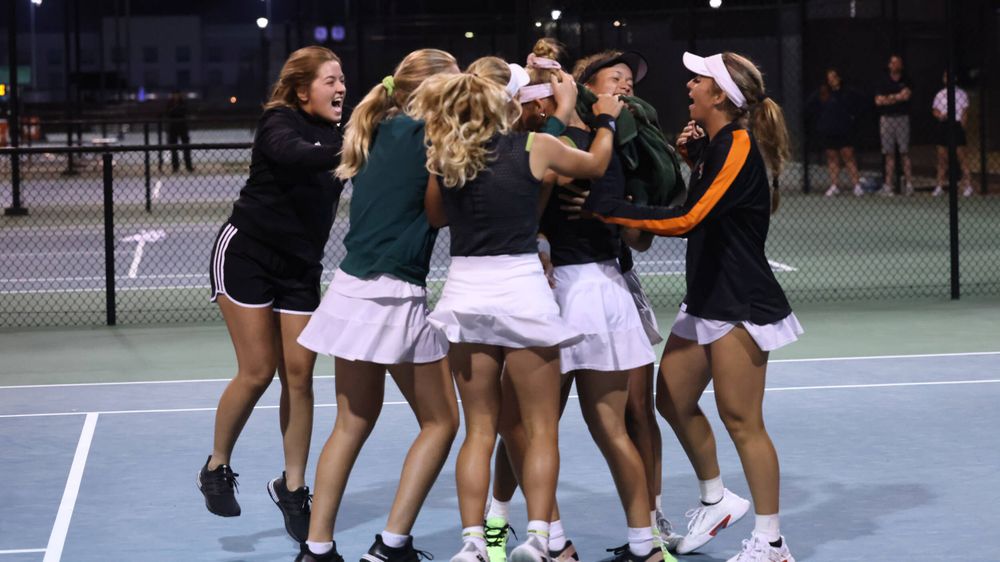 No. 32 Georgia Tech (14-10, 8-5 ACC) posted an impressive effort in doubles to take the doubles point. It took two matches just seconds apart to earn the 1-0 lead.

The final match stopped with Nikolenko and third-year sophomore Maya Tahan holding a 4-3 lead on No. 44 Kylie Bilchev and Ava Hrastar.

The Yellow Jackets got off to an excellent beginning in singles, grabbing the first set on four courts, including two by a 7-5 margin and another by a 6-4 ledger. Miami, though, closed out the other two matches in straight sets to take the lead and begin to turn the momentum.

“Daev to come up 6-4 in the third at two, Bella to win in straight sets at three and Boch to do her job down at five [were all huge],” Yaroshuk-Tews said.

There, Nikolenko, who arrived at Miami from Oskemen, Kazakhstan, in late January, trailed Sharabura in the third. The outing was just the eighth of her young career, including the fifth since she stepped into the lineup full-time in place of injured third-year sophomore Diana Khodan.

Sharabura pulled in front, 6-5, and then had two more match points in the 12th game. Nikolenko yet again battled them off to force a tiebreaker. 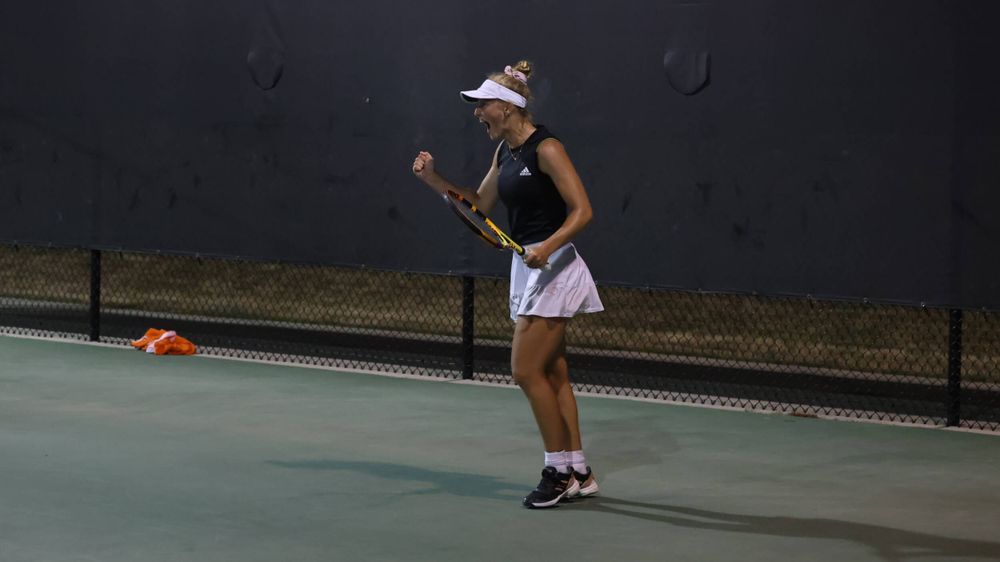 “Taty to pull that out as a freshman [is incredible after], I think, six match points down,” Yaroshuk-Tews saod. “We deserved this win, for sure. Just with what they’ve been through in the past couple weeks. For the match to come down to that kid and her to pull it out and Di to be on the court helping with the coaching, it’s just meant to be.”

Friday marked the second time this season the Hurricanes have won after dropping the doubles point. They are 2-3 in such instances, with both victories in 4-3 fashion against Georgia Tech, as Miami posted the same feat on Feb. 25 in Coral Gables, Fla., in the ACC opener.

The Hurricanes also improved to 22-15 all-time in ACC Championship play, including 5-2 over the last three tournaments, 4-2 in Rome and 3-6 against Georgia Tech, by far their most common foe in the event.