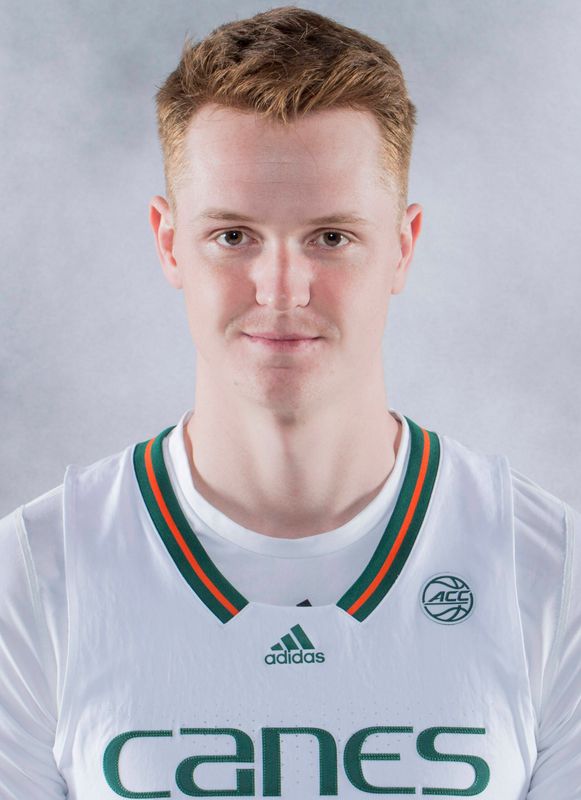 As a Redshirt Senior (2020-21): Season did not count towards eligibility due to COVID-19 pandemic … Missed the entire campaign due to a left foot injury sustained in October during preseason practice.

As a Redshirt Junior (2019-20): Played in 30 of 31 games, missing one due to injury, and earned 24 starts, including in each of the first 23 contests … Averaged 5.9 points, a team-high 6.0 rebounds and a team-best 1.1 blocks in 28.3 minutes per game … Placed No. 12 in the ACC in blocked shots per game and No. 11 in league-only play, also with 1.1 per contest … Tied for No. 10 on Miami’s ACC-only single-season blocks list (20) … Moved into the top 10 on the Hurricanes’ ACC-only career blocks list (33) … Scored in double figures five times, registered multiple blocked shots in nine appearances and played at least 30 minutes 10 times, including 40-plus thrice … Grabbed seven-plus rebounds 11 times, including reaching double figures in five appearances to lead the team … Paced Miami in rebounding in a team-best 13 outings, including doing so 10 times in the first 17 games … Put up nine points and a career-high 11 rebounds versus Florida Atlantic (11/8) … Notched 12 points on 4-of-7 shooting to go along with eight rebounds in 34 minutes in the win at Illinois (12/2) … Tallied 11 points and nine boards against Alabama A&M (12/14) … Set a career high with three blocked shots in 35 minutes in the victory over Temple (12/17) at the Barclays Center … Registered his first double-double with a 15-point, 11-rebound performance, both career highs, against Coppin State (12/21), finishing 6-of-8 from the floor and 3-of-5 from deep to set a new top mark in made field goals and tie his best total in made 3-pointers … Scored 11 points versus second-ranked Duke (1/4) … Grabbed 10 boards at No. 13/11 Louisville (1/7) … Posted 10 rebounds and three assists, playing all 40 minutes, against Pittsburgh (1/12) … Tied his career high with 11 boards in a career-best 41 minutes against ninth-ranked Florida State (1/18) … Tied his career high with 15 points at eighth-ranked Florida State (2/8), finishing 4-of-4 from the floor and 6-of-6 at the line … Missed the game against Boston College (2/12) due to an injury sustained from getting elbowed in the face in practice the day prior … Tallied nine rebounds, a season-high-tying three assists and career-high-tying three blocks in an overtime win versus Syracuse (3/7) in the regular season finale … Grabbed eight boards and tied his career high with three steals against Clemson (3/11) in the ACC Tournament to cap the season.

As a Redshirt Freshman (2017-18): Played in 21 games off bench, including each of last 15 contests … Averaged 3.3 points and 2.8 rebounds per game … Shot 43.8 percent (14-32) from 3-point range … Averaged 16.7 minutes per game in conference play … Did not play in first three games of season (back) … Made solid Miami debut with seven points and two rebounds in 12 minutes of action vs. La Salle (11/22) … Scored nine points and added six rebounds against North Florida (11/25) … Saw first action in ACC play in final minute of first half at NC State (1/21) … Played 13 minutes off bench against Louisville and recorded career-high seven rebounds (1/24) … Hit three straight 3-pointers in second half and scored career-high 12 points in win over Wake Forest (2/7) … Nailed pair of 3-pointers and racked up three steals at Boston College (2/10) … Played season-high 23 minutes and pulled down six rebounds in comeback win over Boston College (2/24).

As a Freshman (2016-17): Enrolled at Miami at the semester break … Did not compete and redshirted.

High School: Won tournament MVP honors when he helped Rangitoto College win the SAS Secondary Schools National Championship, tallying 18 points, eight rebounds and four blocks in the final game … Internationally, represented New Zealand in the FIBA 3×3 U18 World Championship in Kazakhstan … On the U17 team that won silver at the age-groups FIBA Oceania Championships … Member of the U16 team that won bronze at the Australian State Championships … Played in adidas Nations Tournament in Los Angeles, averaging 13.4 points and 6.4 rebounds in five outings, finishing 7-of-11 from long range in the event and to be named one of the top 10 players of the camp … Participated in the NBPA Top 100 Camp in Charlottesville, Va. … Named the most outstanding player at both the Nike All Asia Camp in Beijing and the Basketball Without Borders Camp in Australia … Spent time with the Supercity Rangers and the Breakers Academy, which led him to a role as a development player for the SKYCITY Breakers … Played games in the United States with Harbour Basketball.

Personal: Born Feb. 21, 1999 … Spent three seasons (2017-20) as one of of three Hurricanes from the Australasia region of the South Pacific, alongside Dejan Vasiljevic and current teammate Deng Gak, both of Australia … Earned a bachelor’s degree from Miami in May 2020 after majoring in geography with a minor in sociology … Added a master’s degree in sport administration from Miami in August 2021 … Now enrolled in Miami’s graduate liberal studies program, pursuing a second master’s degree … Committed to Miami over offers from Virginia, SMU and Utah.