On the Court Again

Nearly 20 months after his last competitive outing, the forward from Auckland, New Zealand, finally hit the hardwood as a Hurricane once again.

Now a sixth-year redshirt senior, Waardenburg missed the entire 2020-21 campaign due to a left foot injury sustained in preseason practice. Weeks after the season ended, he made the decision to return to Miami for one final year.

Tuesday, in Miami’s 77-67 season-opening victory over Canisius at the Watsco Center, he was back where he wants to be. His return to action—along with a victory and Hurricane supporters back in the stands—made for a memorable night for the big man.

“It was amazing. You get sidelined and whatnot for a whole season—I know there are a few guys on the team who can say this, as well—and you get a whole new appreciation for the game and the love that you really have for it when you kind of get it taken away from you,” Waardenburg shared. “Being back on the court and also having fans there, as well, that was awesome. We had, I think, a good turnout for our first game and there was lots of energy there. We had a lot of energy from our guys, as well. We were all super excited to get back into the season so it was a great feeling all around.”

Waardenburg not only played, but he did so quite well. He stuffed the stat sheet with 10 points, six rebounds, four assists, three blocked shots and two steals.

The blocks total matched his career high, while the assists and steals numbers both put him one shy of doing so. Meanwhile, the double-digit point total was the 13th of his career, including the fifth time he grabbed at least a half-dozen rebounds while hitting that scoring mark. Waardenburg said he felt “comfortable” against the Golden Griffins. He used that same word to describe the performance of his team as a whole, too.

“The starting five, especially, coming out [as well as we did] at the beginning, that’s just the way we’ve been playing in practice,” he said. “We run this five-out offense that we all feel comfortable in and I feel like we do have really good chemistry in that system. It’s only going to get better over time. The way that we play in practice and scrimmage in practice, it just kind of translated to the game and we felt comfortable out there.”

McGusty, Moore and third-year sophomore Isaiah Wong will often be the defensive focal points of the opposition, making it important for Miami’s big men to step up as they did Tuesday. Along with Walker’s 14 points and Waardenburg’s 10, sixth-year redshirt senior center Rodney Miller Jr., added eight points on 4-of-5 shooting.

Getting that type of production from its frontcourt will be a huge boost for Miami, with 11th-year head coach Jim Larrañaga harping on it to his players. It is something the group will look to continue moving forward.

“Yeah, that’s of big importance. It’s something Coach L emphasizes with us, that we need balance on the floor on the offensive end, from the inside and outside scoring,” Waardenburg said. “Even though we have, I think, the best perimeter guys in our league and possibly the country—they can score at a high level—[you cannot] rely on the jump-shot every night. You do need to find that balance. So, Ant and Rod coming in and giving us big minutes, giving us points—they’re big energy guys, as well—we need to continue to have that for the rest of the season.”

The next chance for Waardenburg and his frontcourt brethren to display what they can do will be Saturday at 1 p.m. when the Hurricanes welcome UCF to the Watsco Center.

The Knights head into the game at 1-0 on the season after defeating Robert Morris, 69-59, Wednesday night at Addition Financial Arena in Orlando, Fla. Fifth-year guard Darius Perry paced all players in points (18) and assists (four) in the win.

The former Louisville Cardinal is UCF’s leading returner in both categories, after averaging 14.7 points and 3.4 assists per game last season. The Knights went 11-12 (8-10 AAC) in 2020-21, but return many key pieces and were picked fifth in the AAC preseason poll.

Records and stats aside, though, it is always a big deal when Miami faces a fellow Sunshine State foe, especially on its home court.

“Whenever you play an in-state school, there’s always a little extra something to it. You kind of get that feeling that the team coming in, they’re really trying to take that one from the home team,” Waardenburg shared. “So, you know UCF is going to be coming in with a lot of energy, a lot of drive. That’s just another challenge for us; we’ve got to step up to it and exceed it, bring more energy than them. I got to see a little bit of their game [on TV] last night; they’re a very good team. They’ve got size and whatnot, but that’s just something that we’re going to have to expect and we’re going to have to take on.”

The Hurricanes are 8-2 all-time against UCF, including 4-1 at home and 2-1 in Larrañaga’s tenure. The last three meetings in the series, however, have gone to the visiting team. Most recently, that result was a 79-70 win for Miami on Nov. 12, 2019.

Saturday afternoon, the Hurricanes will look to reverse the recent trend in the series and get a win on their home court. Waardenburg knows just what the team will need to do in order to make that happen.

“Obviously, the coaches are going to give us a good game plan. We have our structure in what we do and we’ve got to rely on that. We’ve got to trust in the system that we play and we’ve got to bring 110 percent effort,” he said. “We’ve got to outwork them; that’s the goal for every game. The team that brings the most effort has the best chance of winning that game. We’ve got to focus on defense, take another step at the defensive level and make sure everyone is rebounding.

“Offensively, we know we can get looks because we have all those options that the defense [has to deal with],” Waardenburg continued. “The defense is collective; we’ve all got to chip in there and make sure that we’re working at the highest percentage that we can.” 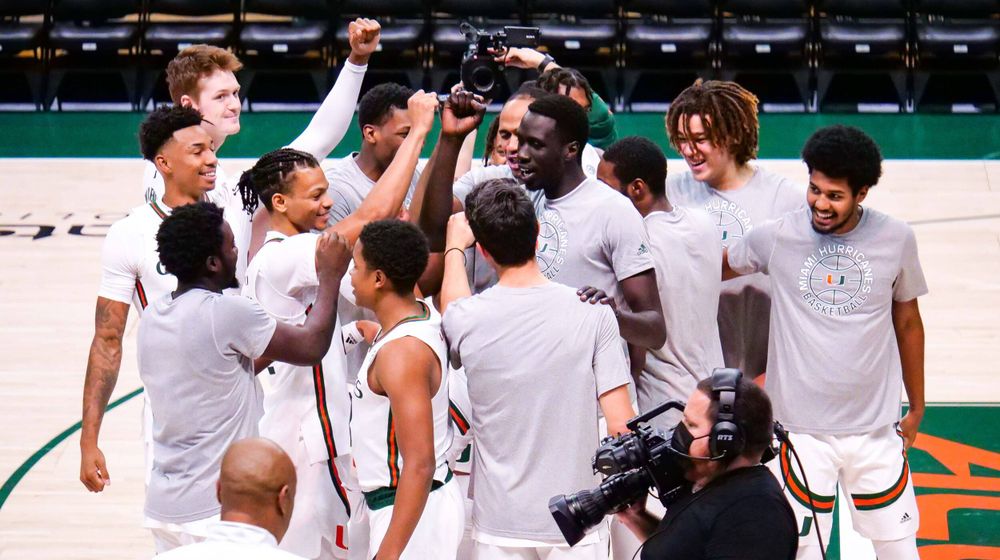 Saturday’s game will be televised live on ACC Network Extra HERE, with Kyle Sielaff and Megan Perry on the call. Danny Rabinowitz will have the radio broadcast on WKIS FM 99.9 HD2 HERE. The game can also be heard on WVUM 90.5 FM HERE, while live stats will be HERE.

After playing UCF, Miami hits the road for the first time in 2021-22, as its next contest is scheduled for Tuesday at 6 p.m. against Florida Atlantic at Abessinio Court at FAU Arena in Boca Raton, Fla., live on CBS Sports Network.