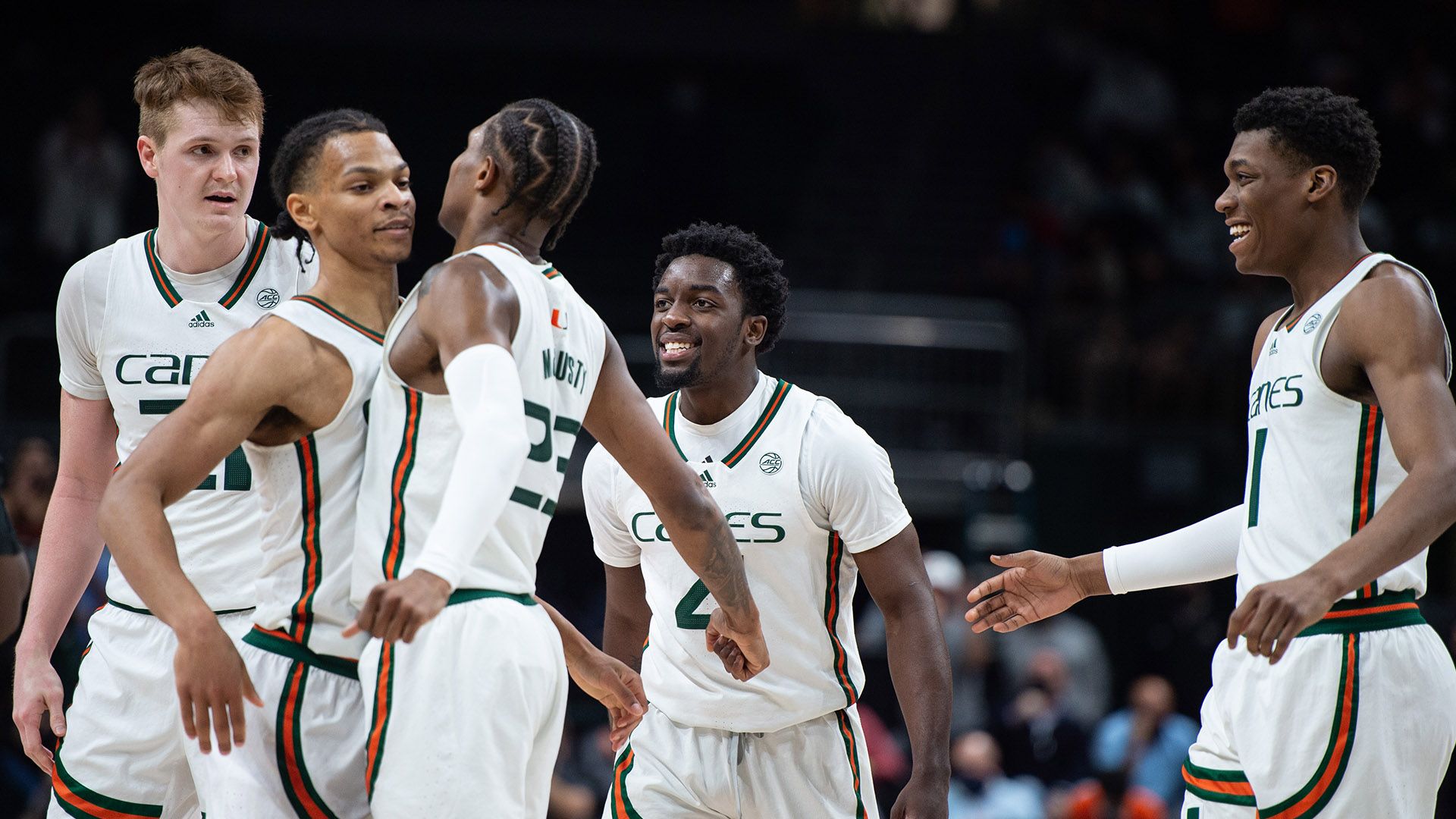 CORAL GABLES, Fla. – The University of Miami men’s basketball team turned in one of the most impressive performances in Watsco Center history Tuesday night, rolling to a thorough 85-57 drubbing of North Carolina.

Third-year sophomore guard Isaiah Wong tied a season high with a game-best 25 points for the Hurricanes, while sixth-year redshirt senior forward Sam Waardenburg added a career-high 21 and redshirt-senior guard Kameron McGusty had 20. It marked the first time since Jan. 7, 2006, Miami had three 20-point scorers in a regulation affair.

“We had a whole week to prepare for them and part of the preparation was rest,” Miami head coach Jim Larrañaga said after his seventh win over North Carolina during his tenure at The U. “We really got a chance to sharpen our saws and rejuvenate our energy level. It showed right from the very beginning. Carolina played on Saturday and then had a long trip to Miami on Monday. We took advantage of a situation where the guys really executed at both ends.”

North Carolina never cut the deficit any lower than 22 during the entire second half, as Miami rolled to the 28-point triumph and held the Tar Heels to a season-low point total, 12 fewer than their mark against the Wildcats.

Wong’s 25 points, the second-most by a North Carolina foe all year, came on 9-of-18 shooting from the field, including a 5-of-9 clip from deep to set a career high in made 3-pointers. He added a season-high eight rebounds, two assists and two steals.

In addition to his career high in points, Waardenburg set top marks in made field goals and made 3-pointers, as he finished 7-of-9 from the floor and 5-of-6 beyond the arc. The Auckland, New Zealand, native scored 16 points in the first 16 minutes and made his first five 3-pointers of the night.

McGusty, meanwhile, notched his 20 points on a 7-of-15 clip from the field and a 5-of-7 mark at the line. He added a team-high 10 rebounds to record his fifth double-double of the year, as well as registered a season- and game-best four steals.

“When Charlie [Moore] is distributing the ball the way he does and those guys are hitting shots the way they did, [we have a great offense],” Larrañaga said. “In Sam’s case, every time we play against a team that really tries to help on our guards, Sam has the opportunity to try to get himself open from 3-point range. Tonight, not only was he open, he was really ready to shoot it. He went 4-for-4 [on 3-pointers] in the first half alone, which I’m sure made a huge difference in the Carolina scouting report because Sam doesn’t normally shoot that much and certainly not from three all the time.”

Junior forward/center Armando Bacot, the two-time reigning ACC Player of the Week, finished with 15 points and a game-high 12 rebounds for the Tar Heels, but Miami forced him into four turnovers and limited him to three first-half points.

No other Tar Heel scored in double figures—a first for the team this season—as RJ Davis placed second with nine points on 3-of-10 shooting. Fellow sophomore guard Caleb Love shot just 2-of-12 in a five-point performance and graduate student forward Brady Manek went 2-of-8 in a seven-point outing.

The Hurricanes posted a dominant 30-5 edge in points off turnovers, good for a season-best total and differential, as they logged 10 steals and forced 14 giveaways. At the other end, Miami committed just four turnovers, their lowest mark of the season and tied for its third-fewest ever in ACC play. North Carolina, which got outscored 13-4 in fast-break points, had just one steal on the night.

Up next for the Hurricanes is a home matchup with Florida State, slated for Saturday at 2 p.m., live on ESPN or ESPN2 from the Watsco Center.

MIAMI HURRICANES POSTGAME NOTES
– The Hurricanes moved to 9-26 all-time against North Carolina, including 4-10 at home and 7-10 in Larrañaga’s tenure.
– Miami’s seven wins over the Tar Heels since 2011-12, the start of Larrañaga’s tenure, are the third-most of any team, trailing only Duke (13) and Virginia (11).
– Dating back to the beginning of Larrañaga’s time at Miami, the Hurricanes are one of three times with at least four double-digit wins over North Carolina, alongside Duke (five) and Virginia (five).
– Since Larrañaga arrived at Miami in 2011-12, the Hurricanes are the only team with three wins over the Tar Heels by 15-plus points (only Louisville has two) and the only team with two victories over them by 20-plus points.
– Also since Larrañaga got to Coral Gables in 2011-12, Miami has handed North Carolina two of its five largest losses, including two of its three ACC regular season defeats by 20-plus points (26 and 28).
– Larrañaga, who entered the game with the ninth-most victories of any active Division I coach, is now 684-468 in 38 years as a head coach, including 214-134 in 11 seasons at Miami.
– With 214 wins as an ACC head coach, Larrañaga passed Vic Bubas for sole possession of the No. 14 spot on the all-time leaderboard.
– Larrañaga is now 14-17 against Duke and North Carolina during his tenure at Miami—the program was 4-31 before his arrival—to trail only Virginia (15-15) for the most wins of any team against those two schools since the start of the 2011-12 season.
– Since Larrañaga’s arrival in 2011-12, Miami is the only school with seven double-digit victories over Duke and North Carolina (no one else has six), the only school with five 15-point wins (no one else has four), the only school with three 20-point wins (only Ohio State has two) and the only school with three 25-point wins (no one else has two).
– Dating back to the start of Larrañaga’s Miami tenure in 2011-12, three of the six largest victories over Duke or North Carolina are by Miami, including three of the only four ACC regular season wins by 25-plus points.
– This is the third time in Larrañaga’s tenure Miami has defeated both Duke and North Carolina in the same season, joining the 2012-13 (four wins) and 2016-17 campaigns.
– For the 12th time this season, Miami used a starting lineup of McGusty, Waardenburg, Wong, fourth-year junior guard Jordan Miller and sixth-year redshirt senior guard Charlie Moore.
– Fourteen-time MLB All-Star Alex Rodriguez, former NFL standout Eric Decker and the Miami HEAT’s Max Strus were among the fans in attendance.
– According to ESPN’s Bryan Ives, the Tar Heels’ 27-point halftime deficit matched their largest mark over the last 25 seasons, equaling Duke’s 53-26 edge on 3/6/10 at Cameron Indoor Stadium in Durham, N.C.
– Per the ACC’s Andy Fledderjohan, Miami’s 27-point lead marked the second-largest advantage of any team in ACC play this season, trailing only North Carolina’s 29-point edge, 49-20, at Boston College on 1/2/22.
– The Tar Heels’ prior largest halftime deficit of the season was 11 against RV/No. 21 Kentucky on 12/18/21 in Las Vegas.
– North Carolina’s first five field-goal attempts of the night all came from 3-point range, while five of Miami’s opening seven did so.
– The Hurricanes’ 14-0 run in the first half marked the largest unanswered surge the Tar Heels have allowed in 2021-22, passing a 13-0 surge by Georgia Tech 12/5/21.
– Four players accounted for all 49 of Miami’s first-half points, as McGusty, Moore, Waardenburg and Wong shot a combined 18-of-27 (66.7 percent) from the field through 20 minutes, including 8-of-11 (72.7 percent) from deep.
– The last time Miami had multiple 20-point scorers was 12/29/21 against NC State when J. Miller (25) and McGusty (20) did so.
– The last time Miami had three 20-point scorers was 2/19/20 in a triple-overtime game at Virginia Tech when Wong (27), Chris Lykes (23) and McGusty (21) did so.
– The Hurricanes last had three 20-point scorers in a regulation game on 1/7/06 against No. 14/12 Maryland when Anthony Harris (22), Robert Hite (22) and Guillermo Diaz (21) did so.
– The only other times Miami had four or fewer turnovers in an ACC game were all during the 2013-14 season, on 2/15/14 at Virginia Tech (three), on 2/22/14 versus Boston College (three) and on 1/15/14 against Florida State (four).
– The Hurricanes have posted 10-plus steals in four consecutive games (49 total) and have forced 13-plus turnovers in five straight contests (78 total).
– North Carolina’s prior season low in field-goal percentage was a 39.0 clip (23-of-59) on 12/11/21 against Elon.
– The only player to score more points this season against North Carolina than Wong is Kentucky’s Sahvir Wheeler, who had 26 on 12/18/21.
– Waardenburg, who notched his 50th start as a Hurricane, scored in double figures for the 18th time, including the sixth this season.
– Tuesday marked the first time Waardenburg has scored 20-plus points, the first time he has made five 3-pointers and the first time he has hit seven field goals.
– Moore logged his 100th start as a collegian.
– McGusty, who surpassed 550 made field goals in his career, tallied 20-plus points for the 20th time, including the 14th as a Hurricane and seventh this season, as well as reached double-digit points for the 80th time, including the 52nd as a Hurricane and 17th this season.
– McGusty logged double-digit rebounds for the seventh time, all at Miami, including the fifth this season.
– In addition, McGusty recorded his seventh double-double, all at Miami, including his fifth this year.
– Wong notched 20-plus points for the 19th time, including the fourth in 2012-22, and scored in double figures for the 50th time, including the 17th in 2021-22.
– Third-year sophomore Anthony Walker eclipsed 1,250 minutes played at Miami.
– Freshman guard Bensley Joseph tied career highs in minutes (19) and assists (two), while notching an ACC high in rebounds (three).
– Freshman forward Thomas Oosterbroek scored his first collegiate point on a free throw with 44 seconds remaining.