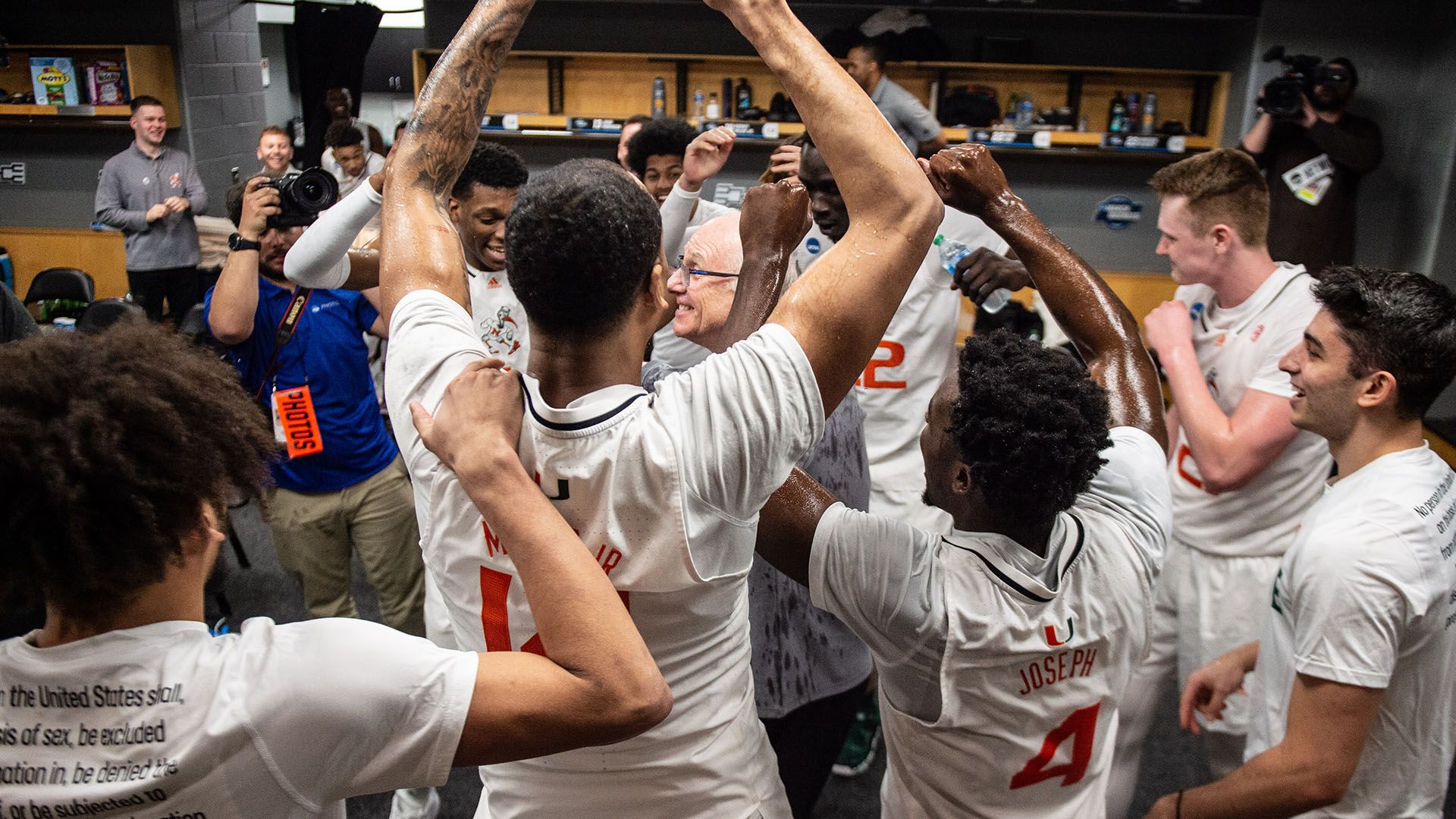 No. 10-seeded Miami (26-10, 14-6 ACC) led for over 38 minutes and trailed for just 16 seconds, en route to the monumental victory over the No. 11-seeded Cyclones. Sixth-year redshirt senior guard Kameron McGusty scored a game-high 27 points, the fourth-most in an NCAA Tournament game by a Miami player, for the Hurricanes in front of the crowd of 20,857.

“This is a milestone that these players will remember for the rest of their lives and so will our fans and our alumni. People will be very proud of how this team has represented our great university,” Miami head coach Jim Larrañaga said. “I thought both teams battled from start to finish with tremendous defensive efforts, multiple efforts. We kind of survived their intensity by creating our own opportunities with turnovers and fast breaks and really clutch performances by the whole starting team.”

After the Hurricanes went on to regain the lead, Iowa State made its first 3-pointer with 7:18 left in the frame to even the score. Miami, though, answered with six straight points in just 69 seconds to go up, 23-17, with 5:37 to go in the half. The Hurricanes eventually built their lead back to seven, but Iowa State scored the final four points of the session and Miami took a 32-29 edge into the locker room.

The Hurricanes, who led for 18:36 in the first half, got all 32 of their points from three players: McGusty (14), fourth-year junior guard Jordan Miller (10) and sixth-year redshirt senior forward Sam Waardenburg (eight).

Both teams exchanged baskets down the stretch until the final margin held steady at 14 and, as the buzzer sounds, the Hurricanes poured off the bench in celebration.

“The word that stands out in my mind is ‘relentless,’” Larrañaga said of the second-half performance. “We were relentlessly pursuing the ball, relentlessly fighting to keep them from getting easy baskets. And then we relentlessly shared the ball. We had 21 assists. That is spectacular against a defense like that.”

McGusty’s game-high point total came on a superb 10-of-18 mark from the floor, his second straight outing with that clip, again matching the second-most makes by a Hurricane in the NCAA Tournament. The Katy, Texas, native, added six rebounds and a game-best four steals, the latter mark tying the program record in NCAA Tournament action and marking the second consecutive contest he did so.

Miller totaled 16 points, connecting on all six of his field goals—that is the most makes without a miss by a Hurricane ever in the NCAA Tournament—and shooting 4-of-6 from the stripe. He also notched seven rebounds and two blocks.

Waardenburg totaled 13 points on 5-of-9 shooting, pulled down a team-high eight rebounds, led all players with three blocks and dished out five assists. Sixth-year redshirt senior guard Charlie Moore, playing in his hometown, tied a season best with a game-high nine assists, matching the program record in an NCAA Tournament contest.

Freshman guard Tyrese Hunter, the Big 12 Freshman of the Year, and senior guard Gabe Kalscheur scored 13 points apiece to pace the Cyclones. Senior guard Izaiah Brockington, a First Team All-Big 12 honoree, added 11 points. Miami, however, held the double-digit-scoring trio to a combined 17-of-45 shooting (37.8 percent), with each of them below 43 percent.

Miami’s 21 assists not only set a season best, but marked the team’s highest total in over three years and set a program record in NCAA Tournament competition. Meanwhile, the 56 points allowed set a new season best at the defensive end.

The Hurricanes will now play top-seeded and third-ranked Kansas in a Sunday matinee at 2:20 p.m. at the United Center, live on CBS.