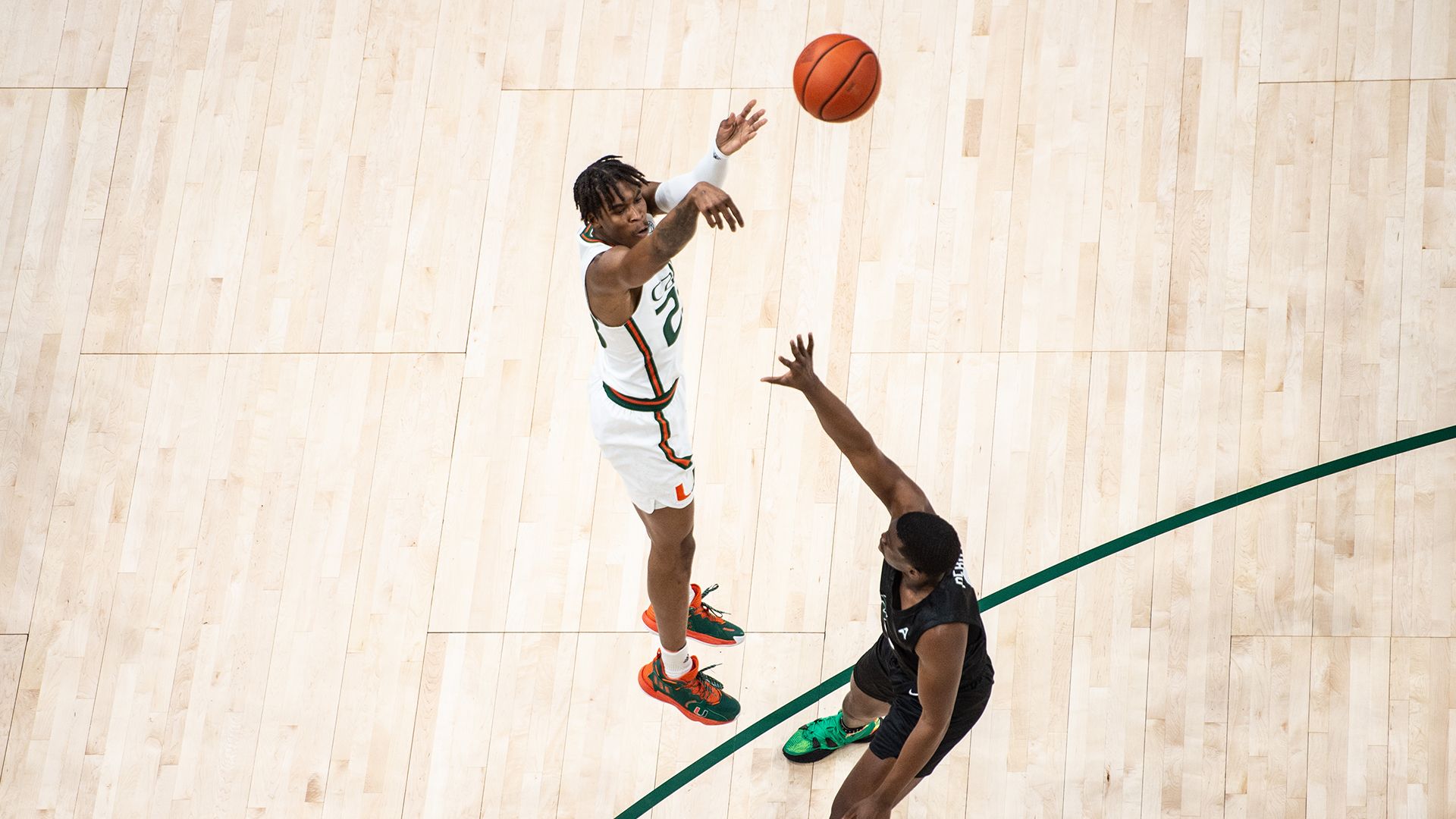 Sixth-year redshirt senior guard Kameron McGusty led all players with 27 points, shooting a dazzling 9-of-12 from the field and 6-of-8 from 3-point range in the Miami (9-3, 1-0 ACC) victory, its fifth in a row. The Hurricanes never trailed and led for nearly 39 minutes.

“I thought we got off to a great start. We ended up having a very good night offensively,” Miami head coach Jim Larrañaga said. “Defensively, we played well in spurts, but there were spurts where Stetson really just made a lot of shots. They ended up shooting 50 percent from three, which is obviously very disappointing. But we were shooting the ball so well from three ourselves. We made 14 3-pointers, which is our high. We had 20 assists, which is terrific.”

After a nearly even start through four-plus minutes, the Hurricanes began to take over and grab control of the game. Miami went on an 18-5 run in 6:04 to go up by 14 points, 26-12, with 8:59 on the clock. The stretch included the Hurricanes making five shots in a row and Stetson (4-7) missing seven straight, as well as committing five turnovers, on the other end.

Miami posted an assist on 11 of its 13 first-half made field goals, tied for its second-most in any frame this year. Sixth-year redshirt senior guard Charlie Moore tallied seven of them, already two past his prior season high.

The Hurricanes put the game out of reach early in the second half when they made four 3-pointers in three-and-a-half minutes. McGusty hit three of those, including two on back-to-back possessions, as he opened 6-of-6 from deep through 28 minutes of action.

Miami, which had an 11-and-a-half minute stretch during the second half in which its eight made field goals were all from beyond the arc, eventually upped its lead as high as 20 in the closing minutes. The Hatters, with the game out of hand, closed the night on a 15-5 run in the final 3:44, to make it a 10-point final margin.

McGusty did miss his final two 3-pointers in the last two minutes, but still set a career high in long-range makes and recorded the most by a Hurricane since Jan. 18, 2020. The Katy, Texas, native finished just two points shy of a career best, as well as posted four rebounds, two steals and zero turnovers.

He became just the sixth player in the nation this season to post 27-plus points against a Division I foe while making six-plus 3-pointers and nine-plus field goals, as well as shooting at least 75 percent in both areas.

“Kam McGusty had a great all-around game scoring 27 points,” Larrañaga said. “…I just think he got in a very good rhythm and got some really good looks. We had a couple of offensive rebound, kick-out threes for him. And then, against the zone, we were able to find him. But he wasn’t the only one; we made 14 threes. So, everybody kind of chipped in, in that category.”

Third-year sophomore guard Isaiah Wong, who made three 3-pointers, finished with 16 points, six rebounds and a season-high-tying four assists. Sixth-year redshirt senior forward Sam Waardenburg tallied 12 points, including 10 in the first half, and matched a season high with four assists.

Moore posted nine points to go along with his season-best eight assists—the most by a Hurricane since Jan. 30, 2021—and season-high-tying three steals. Fourth-year junior guard Jordan Miller grabbed a season-high 11 rebounds to lead all players.

In addition, 41 of the 55 baskets were assisted, as the Hurricanes logged a season-high-tying 20 and the Hatters posted a season-best 21. Miami, though, had a season-low six turnovers compared to Stetson’s 12.

Following an eight-day respite from game action, Miami returns to the court Dec. 29 at 9 p.m. for a matchup with NC State, live on ESPNU from the Watsco Center.

MIAMI HURRICANES POSTGAME NOTES
– The Hurricanes moved to 51-33 all-time against Stetson, including 32-13 at home and 3-0 in Larrañaga’s tenure.
– Miami’s 51 wins over Stetson are its most versus any opponent, while its 84 matchups are its second-most against any foe, trailing only Florida State (87).
– Larrañaga, who entered the game with the ninth-most victories of any active Division I coach, is now 679-467 in 38 years as a head coach, including 209-133 in 11 seasons at Miami.
– With 209 victories at the helm of the Hurricanes, Larrañaga tied Brad Brownell and Jim Valvano for No. 15 among coaches during their time at an ACC school.
– For the ninth time this season and seventh in a row, Miami used a starting lineup of McGusty, Moore, J. Miller, Wong and Waardenburg.
– The Hurricanes are now 87-9 since the program rebirth (1985-86) against non-Power Five, in-state foes, including 66-4 at home, 19-4 under Larrañaga and 15-3 at the Watsco Center in his tenure.
– The last time the Hurricanes won five straight games was 12/2/19 to 12/31/19, which also upped their record to 9-3, as well as featured four non-conference victories and an ACC triumph over Clemson.
– Miami last made 14-plus 3-pointers in a game on 12/21/19 when it set a program record with 18 against Coppin State.
– Prior to Monday, the Hurricanes’ season low in turnovers was eight, set both 12/1/21 at Penn State and 12/4/21 versus Clemson.
– Miami, which posted 20-plus assists for the 17th time in Larrañaga’s tenure and moved to 16-1 when doing so, also recorded 20 assists earlier this season on 11/9/21 versus Canisius.
– With eight assists, Swenson posted the second-most by a Miami opponent this season, trailing only the 10 by Alabama’s JD Davison on 11/28/21.
– Johnston’s six made 3-pointers marked the top total by a Hurricane foe since Georgia Tech’s Michael Devoe posted seven on 2/20/21.
– The Hurricanes’ 11 first-half assists matched their top mark before the intermission this year, tying the mark set 12/4/21 against Clemson, and trailed only the 13 recorded in the second half on 12/8/21 versus Lipscomb.
– Stetson shot 61.5 percent (16-of-26) in the second half, the first team to pass the 60 percent mark in a frame against Miami since No. 10/9 Alabama logged a 63.9 percent mark (23-of-36) on 11/28/21.
– Moore’s seven first-half assists marked the highest total by a Hurricane in a session since Bruce Brown Jr., notched seven in the second half on 1/21/18 at NC State.
– With seven rebounds before the break, J. Miller tied for the third-most in a half by a Miami player this season, including the second-most in the first half.
– J. Miller, who earned his 75th start as a collegian and surpassed 2,500 minutes, recorded his 10th double-digit rebounding total, including his first of the year.
– Waardenburg, who eclipsed 500 points and 100 made free throws at Miami, scored in double figures for the 17th time, including the fifth this year.
– Wong, who eclipsed 300 made field goals and 2,000 minutes as a Hurricane, notched his 44th double-digit point total, including his 11th this season.
– McGusty, who surpassed 150 made 3-pointers as a collegian, tallied his 18th 20-point showing, including his 12th at Miami and fifth in 2021-22.
– McGusty also recorded his 74th double-figure point total, including his 46th as a Hurricane and 11th this year.
– The lone other time McGusty made even five 3-pointers in a game was 12/21/19 versus Coppin State when he shot 5-of-7 from deep.
– The only other players with 27-plus points, six-plus made 3-pointers, nine-plus made field goals and at least a 75 percent clip in both categories against a DI foe this season are LSU’s Darius Days (11/9/21 vs. UL Monroe), Davidson’s Foster Loyer (11/9/21 vs. Delaware), St. Joseph’s’ Taylor Funk (11/26/21 vs.. Georgetown), Jacksonville State’s Jalen Gibbs (11/27/21 at Elon) and Georgetown’s Kaiden Rice (12/8/21 vs. UMBC).
– In addition, McGusty is the first Miami player in Larrañaga’s tenure to reach each of those numbers in an outing, including the first to even make six 3-pointers on only eight attempts.
– Moore, who registered the highest assist total by a Hurricane since Harlond Beverly had nine on 1/30/21 at Wake Forest, posted his 39th five-assist performance, including his season of the year.
– Moore, who  moved past 350 free-throw attempts in his career, became the third Hurricane to foul out this season, as he did so with 44 seconds left.
– Fifth-year junior forward Deng Gak logged his 50th appearance as a Hurricane.
– Freshman guard Wooga Poplar, who scored the co-second-most points of his career with eight, moved past 50 points in his young collegiate tenure.