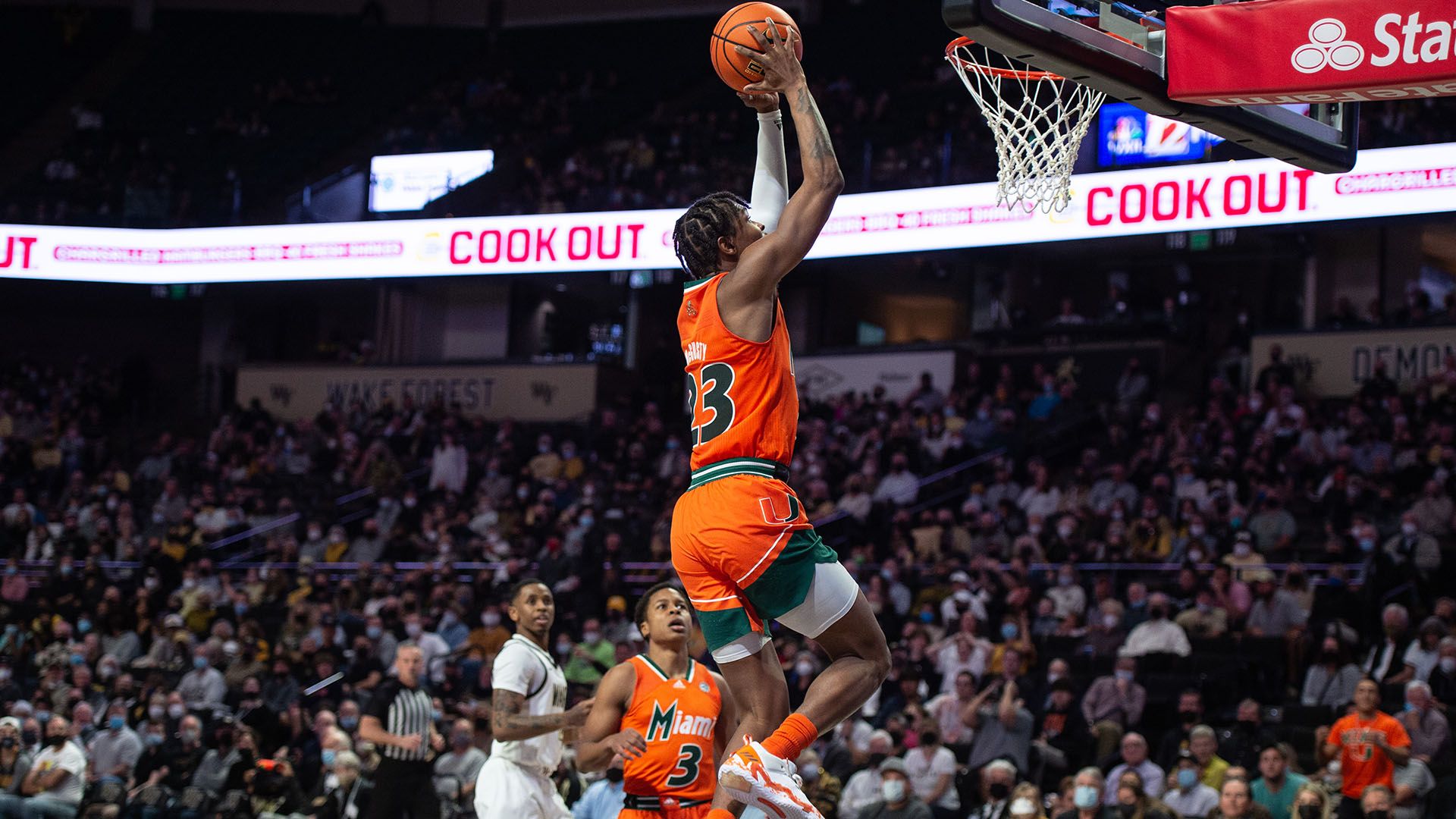 WINSTON-SALEM, N.C. – The University of Miami men’s basketball team rallied back from a 13-point deficit, including a 10-point margin in the second half, to take down RV/No. 25 Wake Forest, 76-72, Saturday evening.

Sixth-year redshirt senior guard Kameron McGusty scored a team-high 22 points for Miami (18-7, 10-4 ACC) which earned its fourth win of the year, including its second in a row, after trailing by 13-plus points. The win also marked Miami’s first at Lawrence Joel Veterans Memorial Coliseum since 2011 and sealed a season sweep of the Demon Deacons, who lead the ACC in overall wins.

“Very simply, the game is played in spurts. We were in too much of a hurry to start the game,” Miami head coach Jim Larrañaga said after his first road win at Wake Forest. “I told them we wanted to play fast and run, but we got in a hurry and started taking ill-advised shots. When you do that, you give the other team a chance to run because your defense is not going to be set. In the second half, we calmed down, we shared the ball much better and played Miami basketball. The guys just stepped up and made one big play after another.”

The Demon Deacons took a 57-56 lead with 7:46 to go, but Miami went back in front by three before Wake Forest eventually leveled the score at 67 on a 3-pointer with 3:02 to go. Third-year sophomore guard Isaiah Wong put the Hurricanes back in front, 69-67, on a pair of free throws just 17 ticks later. McGusty upped the cushion to a game-high five points, 72-67, on a 3-pointer with 1:30 on the clock.

After the teams exchanged baskets, Wake Forest graduate student guard Alondes Williams, the ACC’s leading scorer, converted a three-point play to trim the deficit to two, 74-72, with 37 seconds to go.

Wong, however, countered with a contested, banked-in jump-shot with 11.2 ticks on the clock. The Hurricanes then got a stop at the other end to seal their second top-25 road triumph of the season.

“Everybody makes contributions. Jordan Miller’s tip-in was a huge basket, [as was] Sam Waardenburg’s three from Charlie Moore’s around-the-back pass and Charlie’s three from Jordan Miller’s assist,” Larrañaga said. “And then, when the chips are down, we have Kam and Isaiah, who can take their man and create for themselves. Both of them did that in a very big way.”

McGusty’s 22 points, five of which were in the final 90 seconds, came on 8-of-14 shooting, including a 3-of-5 clip from deep. He added three steals in the win.

Wong scored 20 points of his own, shooting 8-of-14 from the floor and 4-of-4 at the line, as well as grabbed a game-best seven rebounds, one shy of his season high. Sixth-year redshirt senior forward Sam Waardenburg posted 12 points and a career-high-tying three steals to set a season best.

Fourth-year junior guard Jordan Miller, who did not play the last game with a right leg injury, tallied eight points and six rebounds off the bench, including the aforementioned tip-in to up Miami’s lead from one to three with 3:14 to play.

Williams paced all scorers with 25 points, including 24 in the final 25 minutes, on 9-of-15 shooting. The Hurricanes, however, held the ACC’s assist leader to just four, paired with forcing him into seven turnovers, tied for the most by a Miami foe all year.

Senior guard Daivien Williamson was the only other Demon Deacon to score in double figures, as he finished with 12 points. He notched eight points on a 3-of-3 clip in the first 5:06 and then shot 2-of-5 the rest of the way, adding just four more points.

Both teams made over half their shots from the floor, with Miami logging a 51.7 percent clip (30-of-58) and conceding a 54.9 percent mark (28-of-51). The Hurricanes, however, finished with a spectacular 19-0 margin in points off turnovers. They forced 17 giveaways and committed just seven of their own.

Up next for Miami is a visit to Louisville, Ky., where it plays Wednesday at 7 p.m. against Louisville, live on RSN from the KFC Yum! Center.

MIAMI HURRICANES POSTGAME NOTES
– The Hurricanes moved to 14-13 all-time against Wake Forest, including 2-11 on the road and 9-5 in Larrañaga’s tenure.
– This is the first time since a Miami road win on 2/9/11 that the visiting team has won a game in this series, snapping an 11-game streak of campus-site matchups won by the home team that dated back to the start of Larrañaga’s tenure in 2011-12.
– Saturday marked the first time the Hurricanes have ever won in regulation at Lawrence Joel Veterans Memorial Coliseum.
– Larrañaga, who entered the game with the ninth-most victories of any active Division I coach, is now 688-471 in 38 years as a head coach, including 218-137 in 11 seasons at Miami.
– Now owning 101 victories in ACC regular season play, Larrañaga tied Dave Odom, who attended Saturday’s game, for No. 13 on the all-time list.
– For the second time this season, Miami used a starting lineup of McGusty, Waardenburg, Wong, sixth-year redshirt senior guard Charlie Moore and third-year sophomore forward Anthony Walker.
– Miller played 27 minutes off the bench, his first action as a reserve since 11/25/21 versus Dayton in Kissimmee, Fla., after missing Wednesday’s victory over Georgia Tech.
– The Hurricanes, for the fifth time (also 3/1/21 at Virginia, 3/9/21 versus Pittsburgh in the ACC Tournament, 1/8/22 at Duke and 1/29/22 at Georgia Tech), wore throwback jerseys, courtesy of adidas, that paid homage to Miami’s teams of the late 1990’s, including the 1999-2000 squad that won a share of the BIG EAST regular season title and earned the program’s first Sweet 16 berth.
– Now with 34 steals in ACC play this year, Moore moved into a tie with Guillermo Diaz (2004-05) for first place on Miami’s ACC-only single-season list.
– Moore also moved into the top five of the Hurricanes’ ACC-only single-season assists leaderboard, now with 62.
– McGusty moved into the top 10 on Miami’s ACC-only single-season made free throws list, now owning 55.
– In addition, McGusty, with 51, became the eighth player in program history to log 50-plus steals in ACC play.
– Wong entered the top 10 on the Hurricanes’ ACC-only career assists leaderboard, now with 97, tied with Garrius Adams (2009-14) for No. 10.
– This is the first time Miami has swept multiple teams (Georgia Tech and Wake Forest) in regular season play since 2017-18 (Pittsburgh and Virginia Tech).
– Miami is now 200-15 under Larrañaga when leading with two minutes left in the game, including 90-10 in ACC competition.
– The Hurricanes improved to 17-1 this season when scoring 65-plus points and won their 16th such game in a row.
– Miami rallied from a deficit of 13-plus points to win for the fourth time this season, as it also did so on 11/29/21 versus North Texas (14) in Kissimmee, Fla., on 1/5/22 at home against Syracuse (18) and on 2/9/22 at home versus Georgia Tech (14).
– This is the 11th time this season Miami has posted double-digit steals, including the eighth in the last 11 outings.
– The Hurricanes are now 7-6 when trailing at halftime, including 5-3 in ACC play.
– After taking a 5-3 lead through 1:50 of action, Miami did not go back in front until 10:37 remained in the game.
– Miami’s plus-19 margin in points off turnovers was its second-highest of the season, trailing just a plus-25 tally (30-5) against North Carolina on 1/18/22.
– Before Williams, the only Miami opposing player to log seven turnovers in a game this season was Florida State’s Caleb Mills on 1/22/22.
– Saturday marked the first time the Hurricanes won an ACC game in which they shot under 70 percent from the line, improving to 1-3 in such contests.
– J. Miller eclipsed 1,100 points as a collegian.
– Waardenburg, who surpassed 600 points at Miami, scored in double digits for the 21st time, including the ninth this year.
– The last time Waardenburg recorded three steals in a game was on 3/11/20 versus Clemson in the ACC Tournament in Greensboro, N.C., while the lone other time he had three steals in an ACC contest was on 2/10/18 at Boston College.
– McGusty, who moved past 1,650 points as a collegian, registered his 23rd 20-point performance, including his 17th at Miami and 10th this season.
– McGusty tallied double-digit points for the 86th time, including the 58th as a Hurricane and the 23rd this season.
– Wong notched 20-plus points for the 21st time, including the seventh in 2021-22.
– Wong scored in double figures for the 55th time, including the 22nd this year.
– Moore reached 1,550 points in his career.