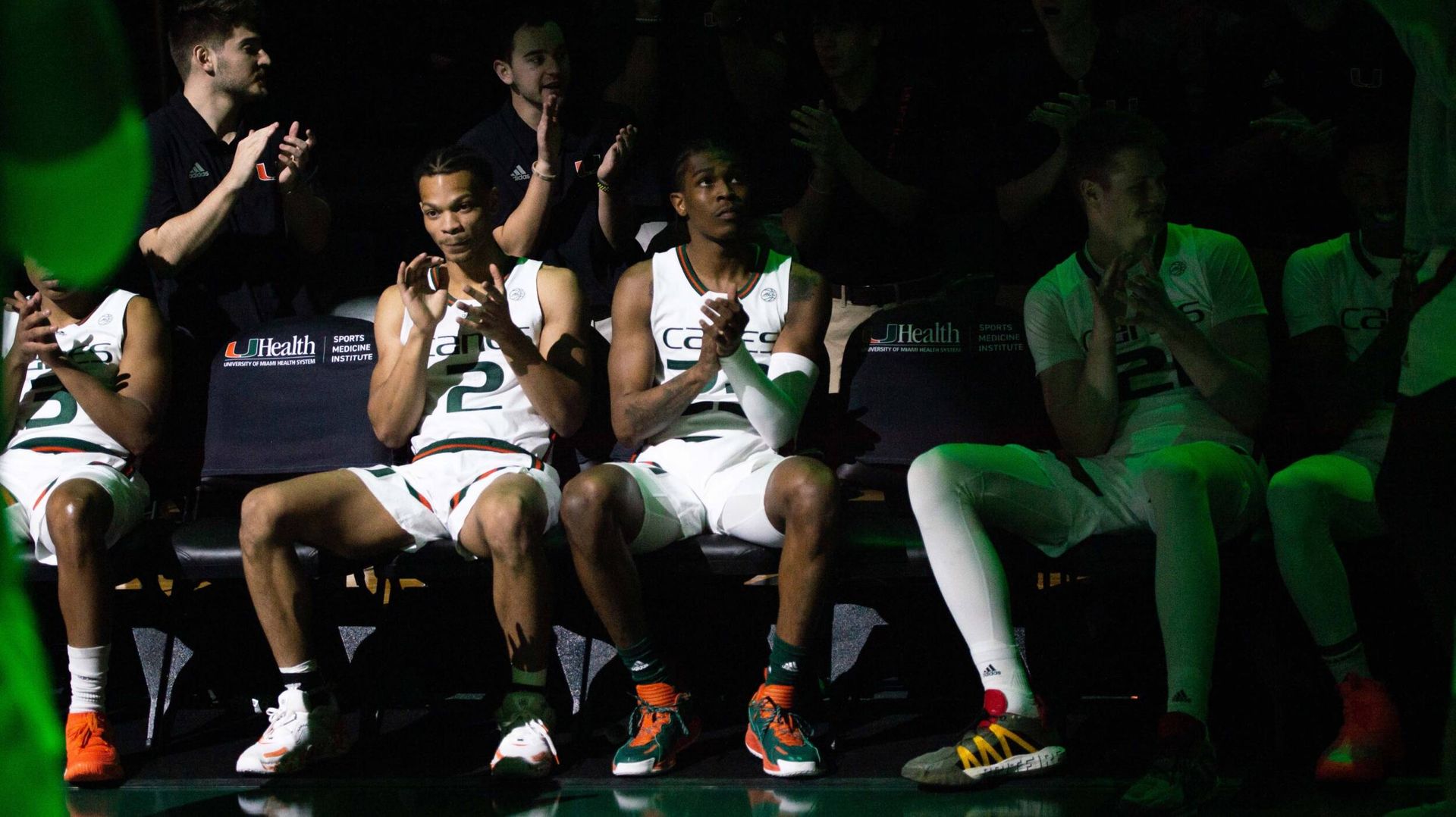 CORAL GABLES, Fla. – It would be hard to imagine a better return to the court after a weeklong break than the University of Miami men’s basketball team’s performance Tuesday night.

Miami (14-4, 6-1 ACC) held a 27-point advantage at the break—tied for the biggest mark against the Tar Heels in the last 25 years, per ESPN’s Bryan Ives—and led by as many as 33 points in front of a jam-packed student section.

“In terms of executing the offensive and defensive game plan, I don’t think we could’ve done it any better. Sam Waardenburg did a great job of fronting [Armando] Bacot,” Miami head coach Jim Larrañaga said after his second 25-point win over North Carolina. “Our guards did a great job of—when they tried to throw it to him, they knocked it loose, they stole it or they took a charge. When you’re able to execute your defensive game plan, it often helps converting your defense into offense and the guys did that at a very efficient level. You’ve just got to give credit to Charlie Moore, getting the ball to the right guy—Sam Waardenburg with the hot hand, Isaiah Wong with the hot hand, Kam McGusty with the hot hand. Those guys just played extremely well together.”

Moore dished out four assists, moving him three away from 500 as a collegian, and facilitated a dazzling offensive attack that included a trio of 20-point Miami scorers for the first time in over 16 years in a regulation game.

Waardenburg, a multidimensional forward, scored a career-high 21 points, shooting 7-of-9 from the floor and 5-of-6 from 3-point range. Wong, a dynamic offensive guard, dropped a season-high-tying 25 points, shooting 5-of-8 from deep to set a career best in makes, as well as added a season-best eight rebounds. 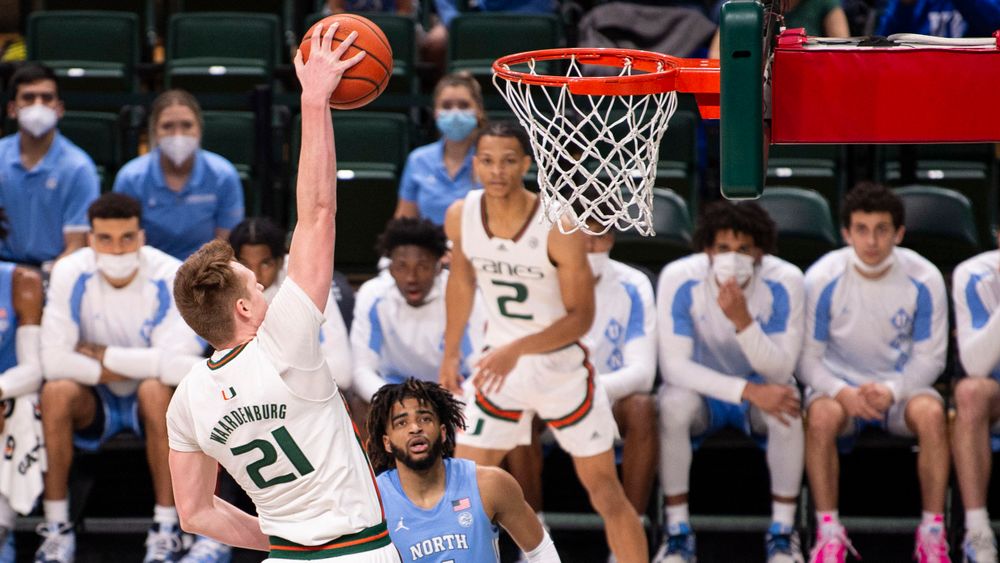 McGusty, a do-it-all guard, rounded out the trio by tallying 20 points to go along with four assists and a season-best four steals.

Moore, Waardenburg and McGusty are all sixth-year redshirt seniors, while Wong is a third-year sophomore guard. Miami’s other starter is Jordan Miller, a fourth-year junior guard. The five are in their combined 25th season of college basketball.

“I think the experience of our starters has made a world of difference—their physical, mental and emotional maturity,” Larrañaga remarked. “They’re able to stay calm under a great deal of stress during the game. Whether we’re ahead or behind, the guys have been able to stay even-keeled. I think that’s been a big reason why we’ve played well at the end of close games and also how we were able to get a lead and sustain that lead for 40 minutes [against North Carolina] because we were very, very consistent at both ends.”

One element of Miami’s success defensively was its ability to force turnovers. The Hurricanes logged 10 steals and North Carolina had 14 total giveaways, which Miami turned into 30 points.

It marked the fourth consecutive game the Hurricanes have posted double-digit steals. Over their last five games, they have forced 78 turnovers, with 58 of them coming via steals.

“Well, I give a lot of credit to my coaches,” Larrañaga said of the recent defensive performances. “This summer, we spent a lot of time talking about our roster and what our strengths and weaknesses were. We realized very quickly that we’re not a big, strong, physical team with a lot of bulk and back-to-the-basket-type players. The ACC is full of guys that are really good in around the basket … [and are] skillful and big, 240 or bigger.

“So, we decided that we would need to scramble more,” he continued. “Meaning [we would] trap, rotate, front the post and do a lot of things to try to disrupt the opponent and force more turnovers because our weakness was going to be our defensive rebounding. We wanted to try to force turnovers to counteract that. We’ve been able to do that so far in ACC play.”

One of those recent games in which Miami had 10-plus steals was Jan. 11 at Florida State in a classic rivalry thriller that came down to the final second. Moore hit a go-ahead 3-pointer with seven seconds left, but Florida State senior guard RayQuan Evans made two free throws with 0.8 ticks left to give the homestanding Seminoles the win. 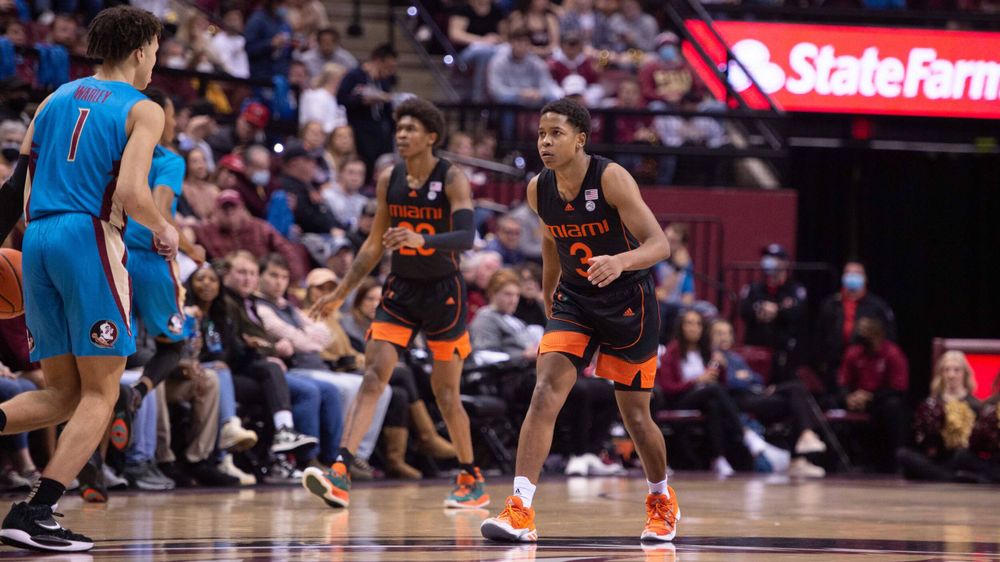 Just 11 days later, the Sunshine State foes are slated to face off once again. In a matchup of the two teams atop the ACC standings, Miami will host the Seminoles, who enter at 12-5 (5-2 ACC), Saturday at 2 p.m. at the Watsco Center.

It is the first time since the Hurricanes joined the ACC in 2004-05 they will play a conference foe twice in the span of three games during the regular season.

“Well, certainly, the teams are very familiar. When you play someone early in the season and late in the season, a lot of things can change,” Larrañaga said. “Right now, there are not a lot of changes. We’ve played Carolina, they’ve played [Syracuse, Duke and North Florida] and now we’ve got to play each other again. They’ll have a chance to watch our game against North Carolina. We’ve already watched their game against Duke. We recognize that Florida State is the longest, tallest, and most athletic team in our league. They’re a very hard matchup for us.”

The Seminoles are led by redshirt sophomore guard Caleb Mills’ 13.8 points and 2.9 assists per game. Miami, though, held him to four points on 2-of-10 shooting, including a 0-of-5 mark from 3-point range, in their first matchup.

The Hurricanes will look to replicate that defensive performance against Mills, as well as some other areas of success in the teams’ second meeting. However, Larrañaga knows his team will have to make improvements if it wants to come away with a rivalry victory.

“I thought we really did a very good job at both ends of the court and we were very much in position to win the game with seven seconds to go,” the two-time ACC Coach of the Year said. “What we learned a little bit is that Florida State’s defense—they do a very good job of switching. If we can improve any area, it would be our ability to attack their switches properly. [We also will look] to make some adjustments in maybe guarding them at the other end of the floor, knowing that certain players really like to drive right and certain players really like to shoot the three. We’ve got to recognize the game plan and recognize why we tell someone to force a guy left when his strong hand is really his right.” 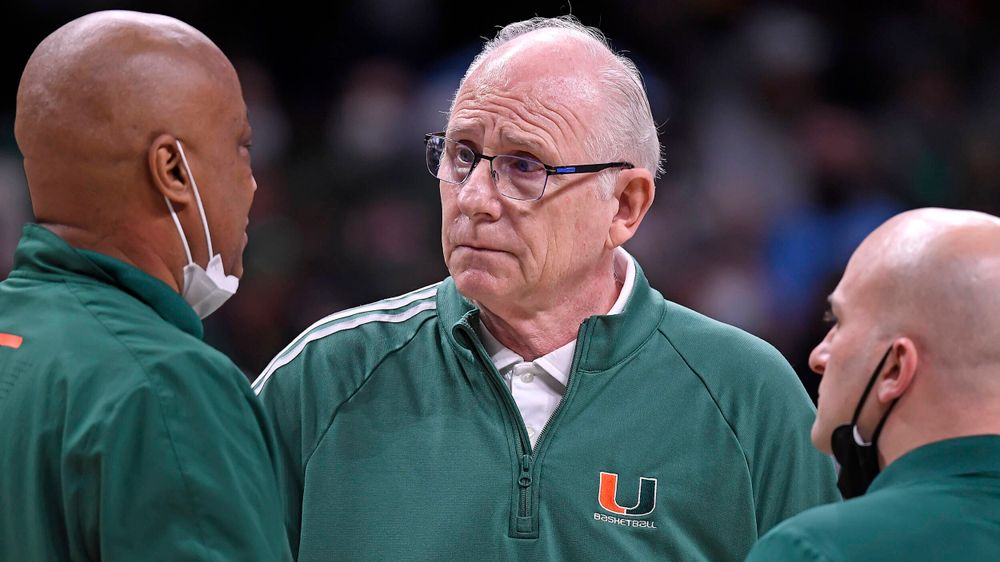 Miami is 36-52 in its all-time series with Florida State, its most common foe in program history. That includes a 28-16 mark on its home court and an 8-14 ledger under Larrañaga.

Saturday, the Hurricanes will hope to see their fans who cheered them on to a rousing victory Tuesday night return to the Watsco Center, as they look to earn a ‘W’ in the intrastate rivalry.

“For the first time in a very long time—ever since I can remember—the two Florida schools are one-two in the ACC right now,” Larrañaga said. “It doesn’t mean we’ll end the season that way, but we would love for our fans to turn out, knowing what a big game this is on Saturday at 2 o’clock.”

Saturday’s matinee matchup will be televised live on ESPN HERE, with Dave O’Brien and Cory Alexander on the call. Joe Zagacki and Danny Rabinowitz will have the radio broadcast on AM 560 Sports WQAM HERE. Action can also be heard on 90.5 FM WVUM HERE and in Spanish on WMYM 990 AM HERE. In addition, live stats can be found HERE.

Following its matchup with the Seminoles, Miami hits the road to play Virginia Tech Wednesday at 7 p.m. at Cassell Coliseum in Blacksburg, Va., live on ACC Network.