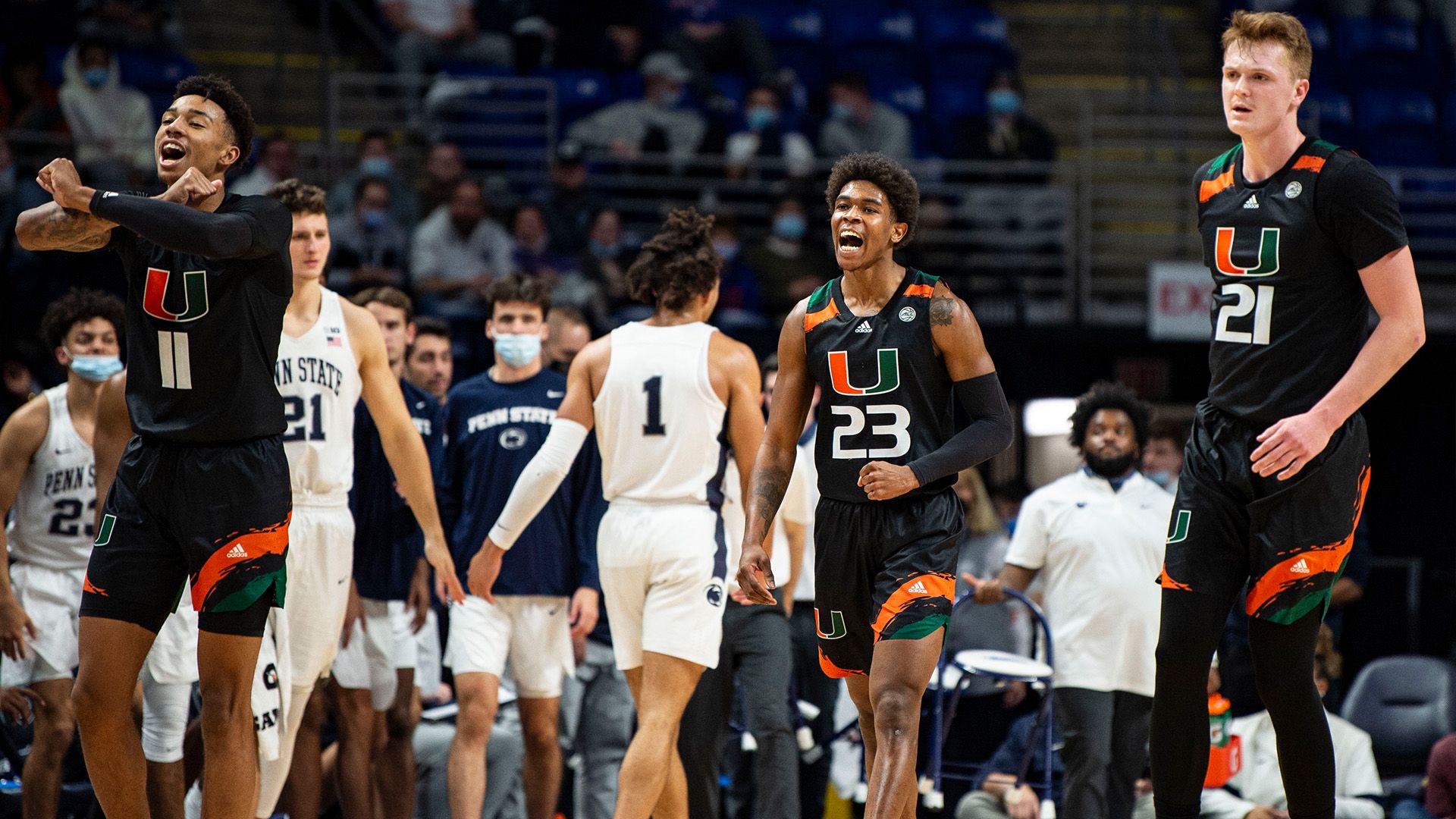 Sixth-year redshirt senior forward Sam Waardenburg paced Miami (5-3) with 14 points, including 11 in the first seven minutes, in a game that featured 11 lead changes and six ties. With the win, the Hurricanes became the only team with a 7-1 record in the annual inter-conference showdown over the past eight years.

“I thought we played with a defensive intensity and focus for 40 minutes tonight, a little different from some of the other games where we defended for a half, maybe 30 minutes. Tonight, we really stuck with it,” Miami head coach Jim Larrañaga said. “I think some of that credit has to go not only to our starters, but the subs, especially [freshman guards] Bensley Joseph and Wooga Poplar coming in and playing so hard defensively that we were able to rest Charlie and Kam, who were in foul trouble. [It was] … just a terrific team effort.”

The Hurricanes started the night by making their first four 3-pointers, including three on back-to-back-to-back possessions in 68 seconds. Three of the four makes in the opening 4:28 came from Waardenburg.

Miami held Penn State (4-3) scoreless for a five-minute stretch late in the half, forcing five turnovers during that time and going on a 7-0 run at the other end, en route to taking a 27-21 lead with 2:09 on the clock. The edge remained at six, 29-23, heading into the break.

Both teams shot under 40 percent from the floor in the first 20 minutes, but the Hurricanes hit twice as many 3-pointers (four) and forced 10 turnovers while logging just four giveaways.

After the Nittany Lions pulled within one early in the second half, Miami again hit back-to-back-to-back 3-pointers, using a 9-2 run in 71 seconds to go up by a game-high eight points, 38-30, with 17:19 left. Penn State, though, countered with a 15-2 surge, including 10 straight points, on seven consecutive made field goals to go in front, 45-40, with 12:14 remaining.

Penn State hit a pair of free throws to cut its deficit to two with 1:31 left, but McGusty drilled a second-chance 3-pointer at the other end to make it 63-58 with 38 ticks remaining. Neither team scored in the closing seconds and Miami came away with its third straight win in the Big Ten/ACC Challenge.

“When a guy sits out as much as Kam and Charlie did in the first half, they have more juice than the guys who played [so much] in the first half. Even though guys are in great shape, you can get worn down,” Larrañaga said of how Miami closed out the win. “…But Charlie, Kam and Isaiah really stepped up in the second half and did a great job. Road victories are hard to come by, especially when the ACC comes to town and plays a team like Penn State on the road.”

Waardenburg, who paced the Hurricanes in scoring for the first time as a collegian, finished 5-of-11 from the field and 4-of-8 from long range, the latter two marks both career highs. He also chipped in four rebounds and three assists.

McGusty, Wong and Moore, a sixth-year redshirt senior guard, all scored 12 points. McGusty tallied all of his after the break, as he played just six first-half minutes after picking up two early fouls, while Moore added a season-high-tying four assists and zero turnovers.

Penn State fifth-year senior forward John Harrar led players in both points (16) and rebounds (12). He shot 6-of-6 from the field and 4-of-5 at the stripe. Junior forward Seth Lundy added 14 points and eight rebounds in the setback.

Miami led for 26:16 and trailed for just 6:54 in a game that was played within a 13-point window from start to finish.

The Hurricanes now return home to Coral Gables, Fla., where they host Clemson in their ACC opener Saturday at noon, live on ACC Network from the Watsco Center.

MIAMI HURRICANES POSTGAME NOTES
– The Hurricanes moved to 1-4 all-time against Penn State, including 1-2 on the road and 1-0 in Larrañaga’s tenure.
– Michigan and UCLA are now the only programs Miami has played four-plus times without earning a victory.
– Larrañaga, who entered the game with the ninth-most victories of any active Division I coach, is now 675-467 in 38 years as a head coach, including 205-133 in 11 seasons at Miami.
– With 675 victories in his career, Larrañaga moved into a tie with Denny Crum for No. 34 on the all-time Division I wins list.
– For the fifth time this season and third in a row, Miami used a starting lineup of McGusty, Moore, Waardenburg, Wong and fourth-year junior guard Jordan Miller.
– The Hurricanes improved to 9-6 all-time in the Big Ten/ACC Challenge, including 5-4 on the road and 8-3 under Larrañaga.
– Miami is the only team in either conference with seven wins over the last eight Big Ten/ACC Challenges, breaking a tie with Duke and Penn State, both of which were 6-1 entering the week.
– The Hurricanes have won four straight Big Ten/ACC Challenge road games, dating back exactly six years, to 12/1/15 at Nebraska.
– Miami has won four consecutive non-conference road games, going back to 11/12/19 at UCF.
– Wednesday marked Miami’s first game of 2021-22 that did not feature a lead of 14-plus points by either team.
– Moore, who made his 125th appearance as a collegian, moved past 450 made field goals.
– In addition, Moore scored double-digit points for the 62nd time, including the fifth in 2021-22.
– Waardenburg, who made more 3-pointers (three) in the first 4:28 of Wednesday’s game than he previously did all season (two), surpassed 50 makes in his career, as well as moved past 100 assists.
– Waardenburg had never hit four 3-pointers in a game previously and only made three twice, both at home: 2/7/18 vs. Wake Forest and 12/21/19 vs. Coppin State.
– Waardenburg, who also eclipsed his prior career high in both field-goal attempts (10) and 3-point attempts (five), scored in double figures for the 15th time, including the third this year.
– Wong, who moved past 250 rebounds and 50 steals at Miami, tallied double-figure points for the 40th time, including the seventh this season.
– McGusty, who surpassed 150 assists in his career, scored in double digits for the 70th time, including the 42nd as a Hurricane and seventh in 2021-22.
– J. Miller eclipsed 450 rebounds as a collegian, including grabbing the offensive rebound that led to McGusty’s late 3-pointer, as well as reached 350 made field goals.