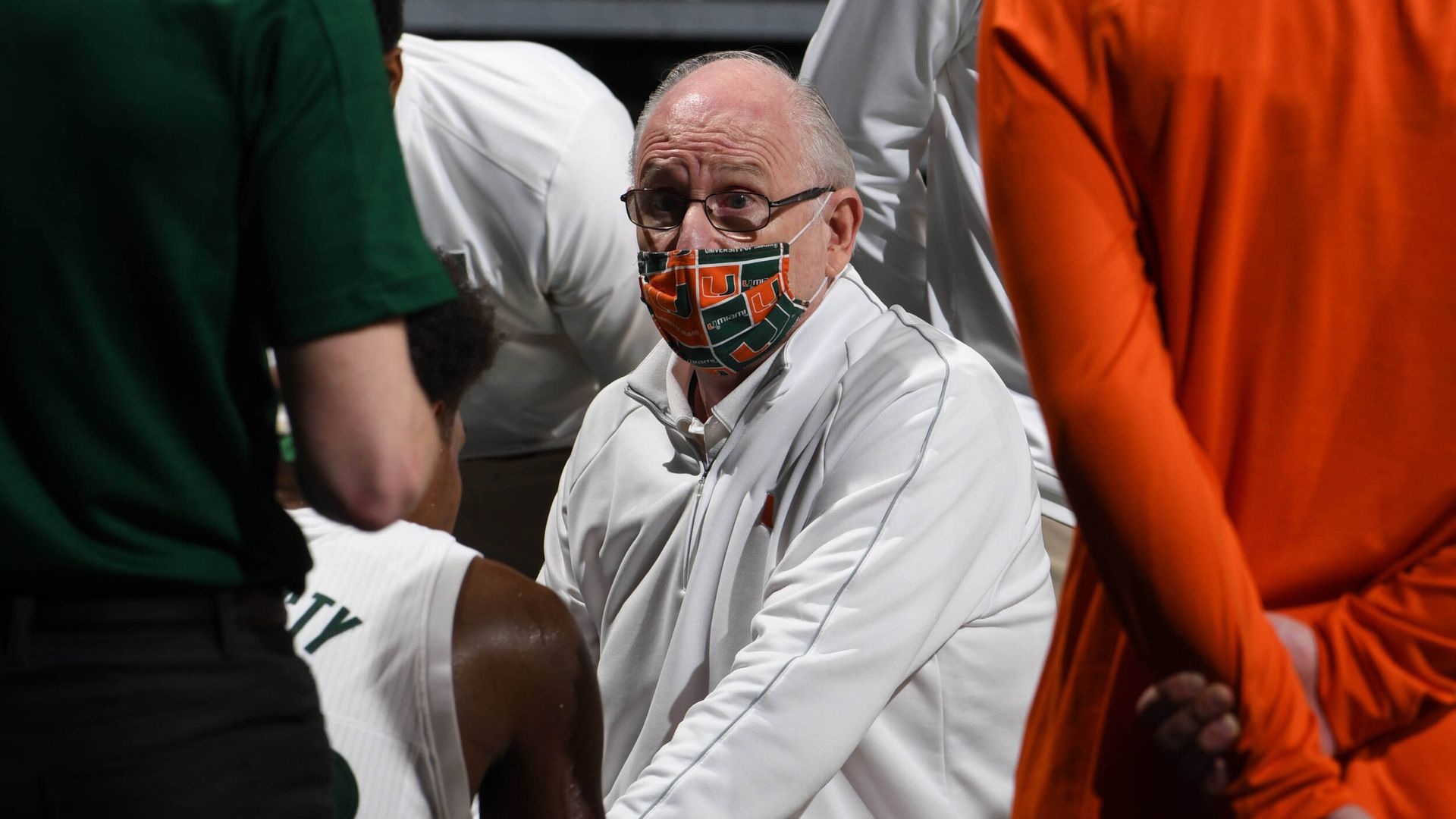 CORAL GABLES, Fla. – Finally. After a seven-month wait, the University of Miami men’s basketball team will finally get to play an opposing school.

Since March, all the Hurricanes could do was practice and scrimmage internally. But that will change Wednesday night.

Miami is set to face Nova Southeastern at 7 p.m. at the Watsco Center in a season-opening exhibition contest. While it may not count as an official game, it is as close to one as the team has had since the ACC Tournament in March.

Making it all the more special is that, unlike 2020-21 when fan attendance was prohibited due to COVID-19 protocols, there will be supporters in the stands once again.

“I think our guys will be very excited about playing in the Watsco Center, hopefully with some fans in the stands. The Watsco Center is a great home court,” Miami head coach Jim Larrañaga said. “When our students come out, our fans come out and our season ticket holders come out, the energy in the building is really what creates the excitement. Our opponent on Wednesday is a team that loves to run and shoot the three. They’re very, very fast and it should be an exciting, up-tempo game where the winning team is like to score over 100 points.”

Although the Hurricanes may be facing a Division II foe in an affair that does not impact their record, this is still a game Miami can grow from. 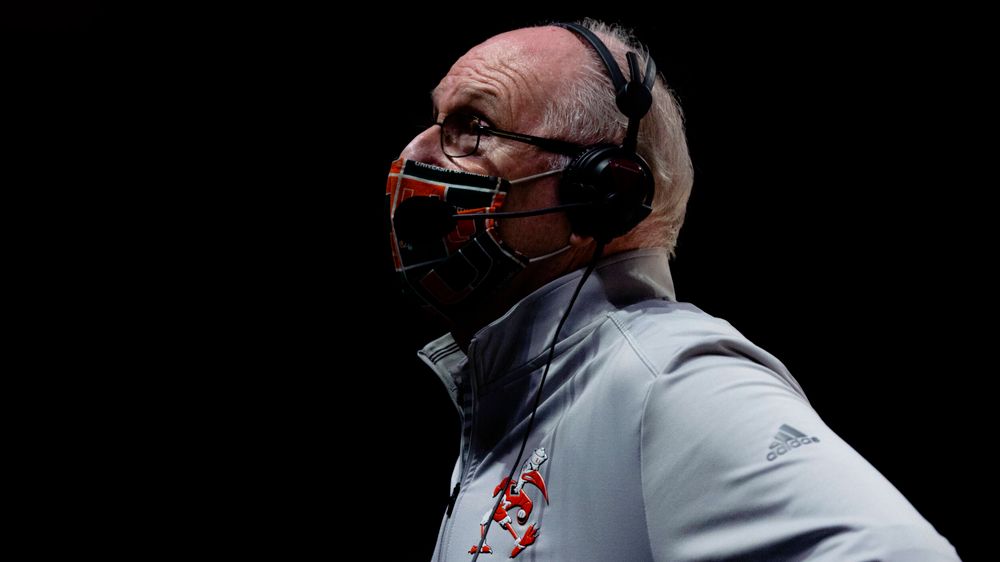 The chance to play unfamiliar faces for the first time since March presents Larrañaga and his players with the opportunity to see things they otherwise may not in a practice setting. Furthermore, the Hurricanes will get quite the test on defense from such a high-powered offensive attack.

“You can learn from every experience,” the two-time ACC Coach of the Year said. “We’ve been emphasizing to our players to really concentrate on improving our team defense and when you play a team like Nova Southeastern, they really test your defense. And whether we play great defense or they torch us, we’ll learn a lot from the experience.”

It is fitting the Hurricanes will be tasked with guarding a vaunted offensive system in their first action of 2021-22.

Getting better on the defensive end of the floor has been one of the main areas highlighted by the Miami coaching staff this season. While not the only one, it has been right at the top of list in terms of areas where progress is needed.

“We’re really focused on improving our defense and defensive rebounding,” Larrañaga said of the offseason emphases. “And on offense, [we are working on] sharing the ball better and shooting from three very efficiently.”

One reason why Miami did not have quite the defensive showing in 2020-21 it hoped was because of a preseason injury.

Sam Waardenburg, who entered last year as the team’s best returning defender and rebounder, went down in October 2020 with a left foot injury and missed the entire season. His defensive ability—and versatility—proved difficult for the Hurricanes to replace. 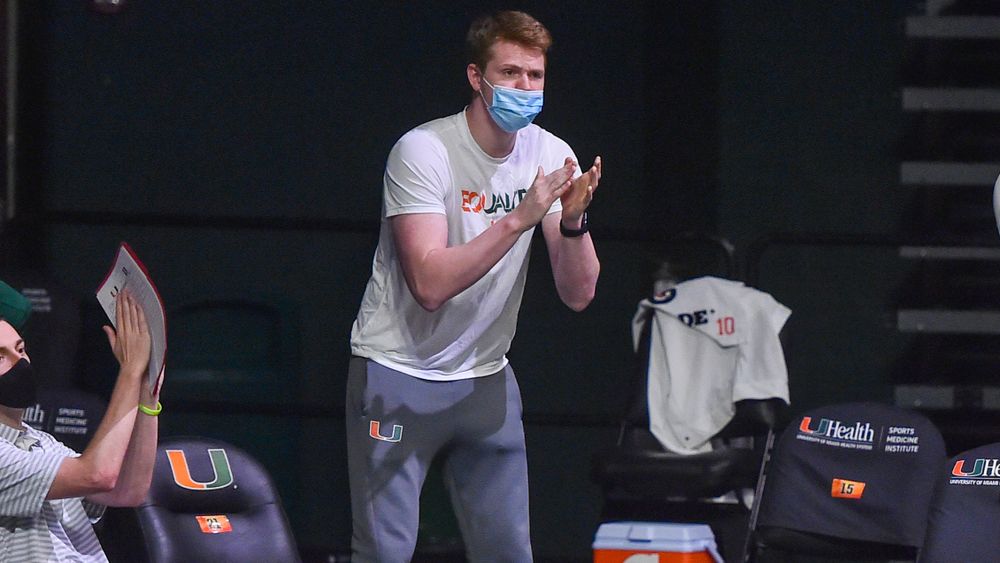 Now, though, Miami has the sixth-year redshirt senior forward back on the hardwood and he enters his final collegiate campaign after a strong summer.

“The absence of Sam Waardenburg really hurt us last year and having him back has been a huge help,” Larrañaga shared. “Hopefully, Sam will stay healthy and be able to play like he’s been practicing. If he does, that will make a huge difference in our lineup.”

Along with getting back Waardenburg and sixth-year redshirt senior center Rodney Miller Jr., from injury, Miami also has five new scholarship players on its roster.

The group includes three freshmen in Bensley Joseph, Wooga Poplar and Jakai Robinson, as well as two transfers in Charlie Moore and Jordan Miller. All five are guards and each one brings quality skills to the table.

The three freshmen are all top-125 recruits, while Moore is already a 1,200-point scorer and Miller is a reigning Third Team All-Atlantic 10 honoree. The group, despite some differentiation in abilities, brings some common denominators to the table.

“I think our new guys are a group of athletic 3-point shooters,” Larrañaga said. “They can all handle the ball, they can all shoot the ball and they’re good at finding their teammates who can shoot the three. We’re likely to shoot a lot more threes than we did last year.”

All five will see their first game action in a Miami uniform Wednesday night against Nova Southeastern, which did not play during the 2020-21 season due to COVID-19. The Sharks finished 23-6 (15-5 SSC) in 2019-20 and reached the NCAA Tournament before its cancelation.

At the helm of Nova Southeastern is a coach described by Larrañaga as “legendary.” That would be Jim Crutchfield, a multiple-time national coach of the year who has led his teams to multiple Final Fours.

When his Hurricanes and take the court against Crutchfield’s Sharks, however, Larrañaga will not be focused so much on the score or specific stats as he is about health and competitive spirit.

“The first and most important thing is that everybody remains healthy after the game, no injuries,” Larrañaga remarked. “[We also want to see] that everybody who stepped out onto the floor worked very hard at the defensive end, ran the floor for 40 minutes and showed consistent effort at both ends.”

Wednesday night’s action will be televised live on ACC Network Extra HERE, with Kyle Sielaff and Murray Jarman on the call. The contest will also be available on the radio via WVUM 90.5 FM HERE. Additionally, live stats for the game can be found HERE.

After its matchup with the Sharks, Miami has almost three weeks off before it begins the regular season. The first official game is set for Nov. 9 at 7 p.m. versus Canisius at the Watsco Center.