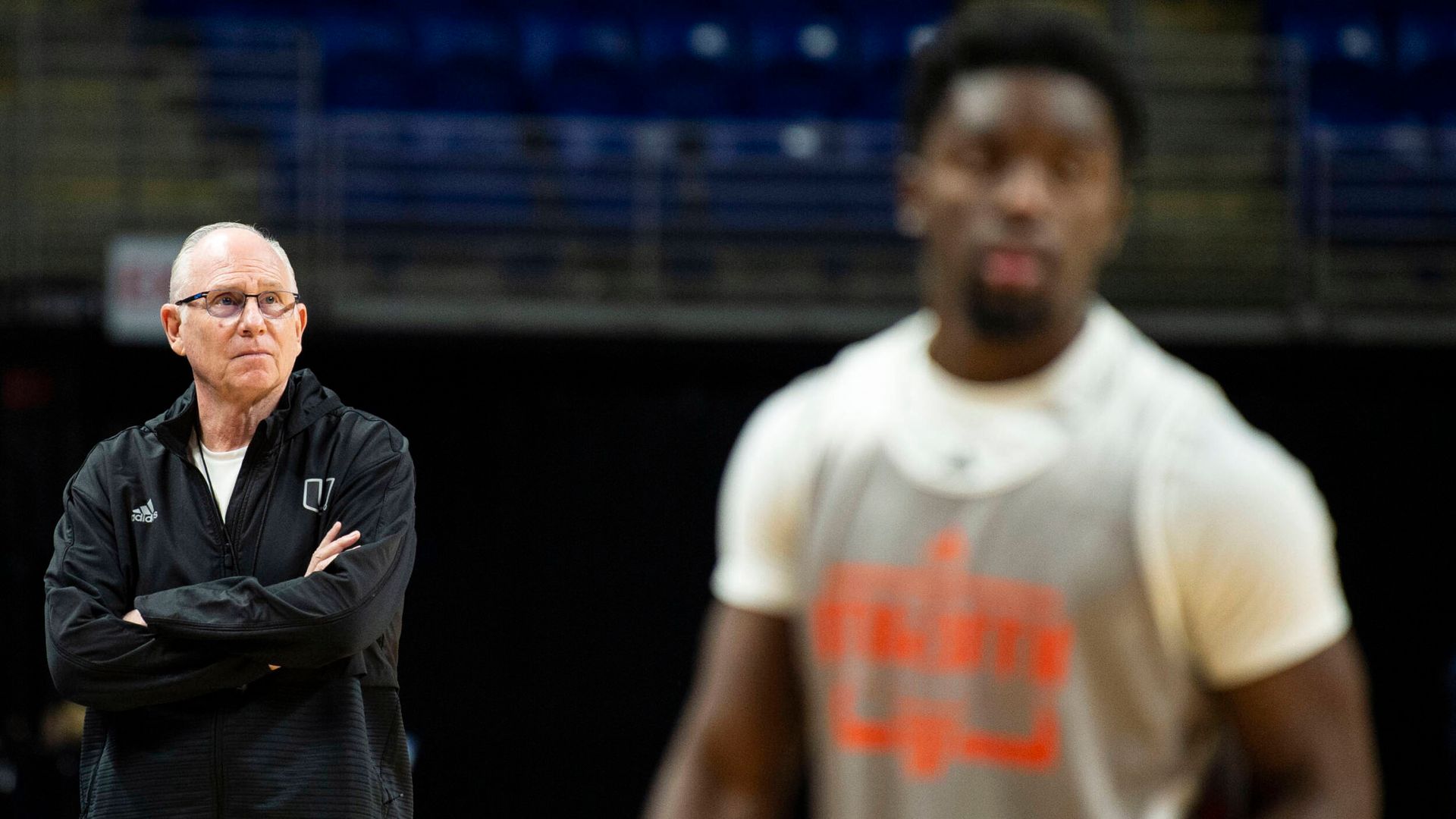 CORAL GABLES, Fla. – No men’s basketball program has performed better of late in the Big Ten/ACC Challenge than the University of Miami.

The Hurricanes logged a 63-58 victory over Penn State at the Bryce Jordan Center in University Park, Pa., to move to 7-1 in the event over the last eight years. No other team in either league has seven victories during that stretch.

Miami (5-3) trailed by five with 12 minutes left, but controlled play down the stretch to earn a fourth consecutive road win in the annual clash.

Sixth-year redshirt senior forward Sam Waardenburg paced the victors with 14 points, shooting 4-of-8 from 3-point range to set career highs in both categories. He scored 11 of his points in the opening seven minutes, including drilling three 3-pointers in the first five, immediately setting the tone for Miami. 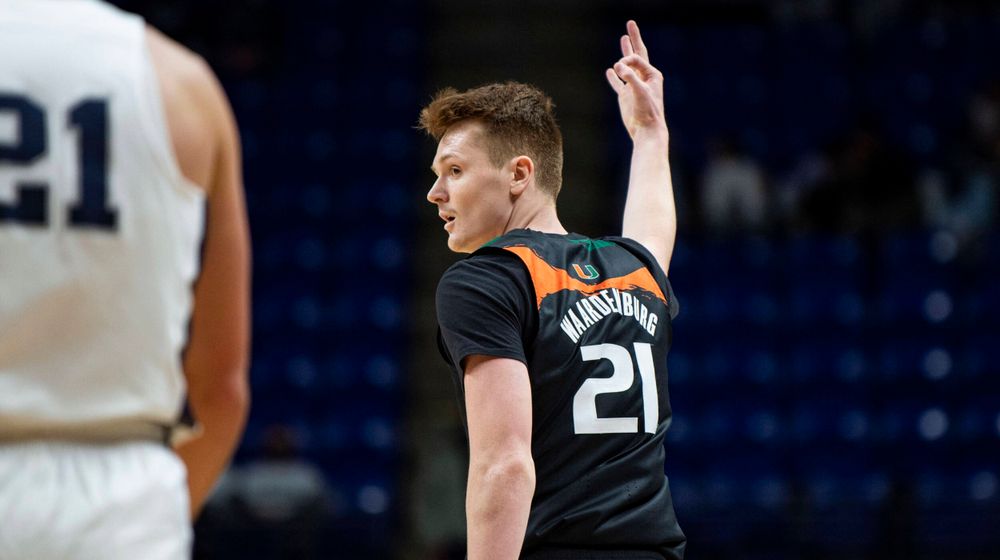 “Sam Waardenburg had, perhaps, his best game as a Miami Hurricane,” Miami head coach Jim Larrañaga said. “He did everything; he defended, he shot the ball well, he handled the ball very well. And then, in the second half, I thought Charlie, Kam and Isaiah really stepped up and made big shots for us.”

While that quartet accounted for nearly 80 percent on Miami’s scoring on the night, there were other players who made an impression on their coach. And they did so at the other end of the court.

In particular, it was freshman guards Bensley Joseph and Wooga Poplar who drew rave reviews from Larrañaga for their performances off the bench. 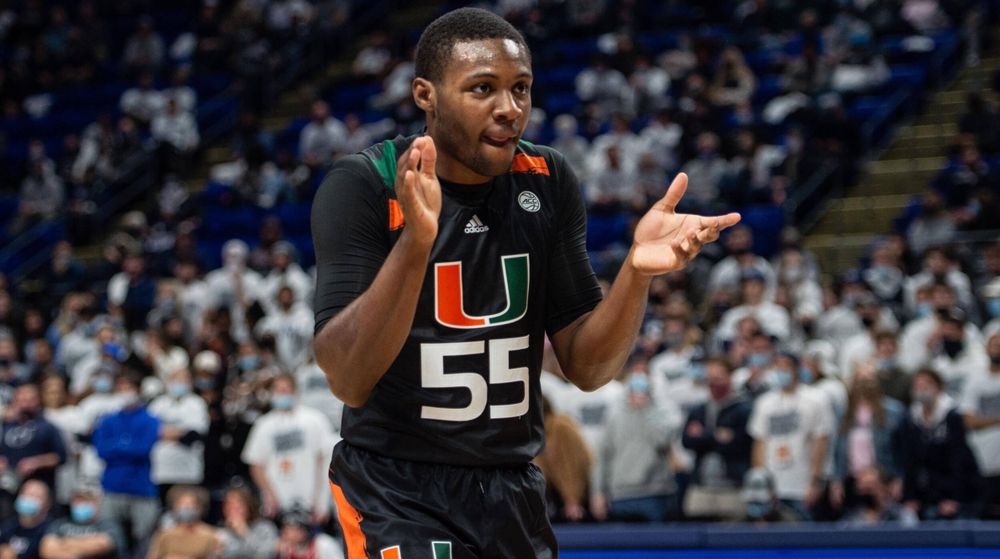 “I would say [watching the film] reaffirmed that our freshmen did a terrific job defensively when Charlie Moore and Kam McGusty were in foul trouble the first half,” the two-time ACC Coach of the Year said. “We didn’t lose the lead and not play well when they were in the game.”

After playing for conference pride against the Nittany Lions, Miami must now shift into a completely different mode for its next game. Up next is the start of league play.

Saturday at noon, the Hurricanes host Clemson at the Watsco Center in their first of 20 conference outings this season.

The Hurricanes are ready for conference action to begin. Now, they are just looking to get an added boost from some valuable supporters when they do so.

“I think the excitement can be generated by our students and our fans and the community getting behind this team. Our players are all already excited. They’re really looking forward to starting the ACC league race,” Larrañaga shared. “…Our fans really need to get out there and help us because they really do help. Category 5, when the students show up, that’s a huge help for us. It really creates an electric environment in the Watsco Center.”

Miami is 6-11 all-time in ACC openers, but sports an 11-6 ledger in ACC home openers. This is the second time the Hurricanes have opened conference play against Clemson, previously doing so in 2008-09.

The Tigers head into the weekend at 5-3 on the season. They were picked No. 11 in the ACC preseason poll after registering a 16-8 (10-6) mark and making the NCAA Tournament last year.

Sophomore forward/center PJ Hall is the top scoring threat for Clemson through eight games, as he comes in averaging 13.9 points per contest.

Larrañaga’s opposition on the Clemson sideline is a familiar face, dating back to 2002, and one who presents difficult strategic matchups.

“I think Brad Brownell has done a terrific job there. We’ve competed against each other for not just the 10 years in the ACC, but [four more] years in the CAA,” Larrañaga said. “His team is an outstanding defensive team and an outstanding 3-point shooting team. They play very hard, very physical.

Saturday’s contest will be broadcast live on ACC Network HERE, with Wes Durham and Malcolm Huckaby on the call. Joe Zagacki and Danny Rabinowitz will have the radio broadcast on AM 560 Sports WQAM HERE.

Action can also be heard on 90.5 FM WVUM HERE and in Spanish on WMYM 990 AM HERE. In addition, live stats for the game will be available HERE.

Following its matchup with Clemson, Miami returns to non-conference play, as it hosts Lipscomb Wednesday at 7 p.m., live on ACC Network.