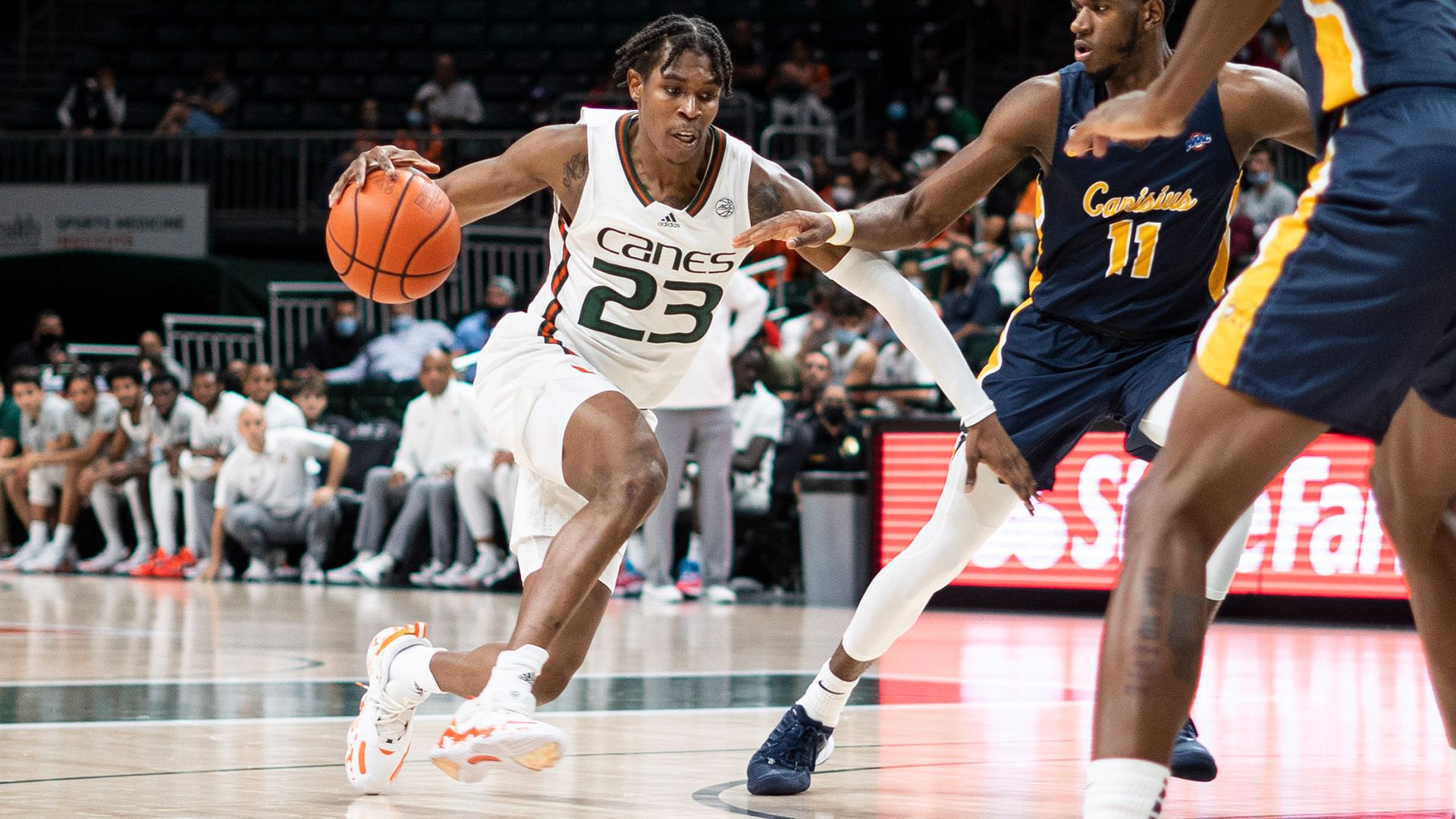 CORAL GABLES, Fla. – The University of Miami men’s basketball team started its 2021-22 campaign with a 77-67 victory over Canisius Tuesday night at the Watsco Center.

Paced by a 20-point, 10-rebound double-double from sixth-year redshirt senior guard Kameron McGusty, who shot 8-of-14 from the floor, Miami (1-0) never trailed the Golden Griffins and held the lead for the final 39 minutes.

“It was quite a battle. I thought, in stretches, we played very well,” Miami head coach Jim Larrañaga said after his 201st win with the Hurricanes. “I thought our defense was really solid, but we turned the ball over too much. We know that and we’ve got to get better at that. The players know you can’t be careless; you’ve got to be strong because the defense is trying to force you to make mistakes.”

The Hurricanes scored on their opening five possessions, including hitting their first four shots, to take a quick 11-4 lead after just 3:12. Miami went on to stretch its advantage as high as 11, 30-19, with 5:41 left in the half, but Canisius (0-1) never let the deficit grow beyond that before the break and closed to within six, 37-31, at the intermission.

The Hurricanes created all the separation they needed to seal the win with a 13-2 second-half run, taking a 67-50 edge with 7:23 to play. Third-year sophomore forward Anthony Walker tallied nine points during the surge, while Miami held Canisius without a field goal for 6:40, as it missed 10 consecutive attempts.

The 17-point lead proved to be the largest of the game for Miami, which won its season opener for the 32nd time in 37 seasons since the program rebirth in 1985-86.

McGusty led all Hurricanes in scoring and topped all players in rebounding, matching his career high in the latter total, to record his third collegiate double-double. The Katy, Texas, native, who made his first four 3-pointers, added four assists and two steals to his ledger.

“Well, Kam is doing everything at both ends of the court. He’s handling the ball like a point guard, he’s shooting the ball like a shooting guard, he’s rebounding like a small forward—and we need that,” Larrañaga said. “He’s an older guy with a lot of experience and a lot of confidence in his game and especially on a night when Isaiah [Wong] was not clicking on all cylinders, we needed everything from Kam.”

In addition, sixth-year redshirt senior forward Sam Waardenburg, in his first action since 2019-20, recorded 10 points, six boards and a career-high-tying three blocks. He also finished with four assists, one shy of his career best.

Green led all scorers with 21 points for the Golden Griffins, shooting 7-of-11 from the floor and grabbing a team-best eight rebounds. Armon Harried scored 11 points in the loss, while fellow junior guard Akrum Ahemed added 10.

Up next for the Hurricanes is an in-state showdown with UCF, set for Saturday at 2 p.m. at the Watsco Center, live on ACC Network Extra. Season tickets are still available and can be purchased HERE.

MIAMI HURRICANES POSTGAME NOTES
– The Hurricanes claimed the first all-time meeting between Miami and Canisius.
– Larrañaga, who entered the game with the ninth-most victories of any active Division I coach, is now 671-464 in 38 years as a head coach, including 201-130 in 11 seasons at Miami.
– Miami used a starting lineup of McGusty, Moore, Waardenburg, fourth-year junior guard Jordan Miller and third-year sophomore guard Isaiah Wong, marking the first starts as Hurricanes for Miller and Moore.
– Miami moved to 57-14 all-time in season openers, including 48-10 at home, 32-5 since the program rebirth (1985-86), 16-2 since joining the ACC (2004-05) and 9-2 under Larrrañaga.
– The Hurricanes are now 59-12 all-time in home openers, including 33-4 since the rebirth, 16-2 since joining the ACC and 9-2 in Larrañaga’s tenure.
– Tuesday marked the first time in 612 days—since 3/7/20—fans were allowed to buy a ticket and attend a basketball game at the Watsco Center.
– The Hurricanes have now logged 20-plus assists in a game 16 times in Larrañaga’s tenure, after hitting that number for the first time since 12/29/20 at Virginia Tech.
– Moore scored Miami’s first points of the season—and his first points as a Hurricane—on a driving layup just 18 seconds into the game.
– Moore, who eclipsed both 1,250 points and 125 steals as a collegian, registered his 58th double-figure point total, including his first at Miami.
– McGusty, who has posted all three of his double-doubles since transferring to Miami, recorded his 14th 20-point showing, including his eighth as a Hurricane.
– In addition, McGusty, who moved past 450 made field goals in his career, notched his 64th double-digit scoring performance, including his 36th at Miami.
– Waardenburg, who surpassed 50 steals in his career, tallied double-figure points for the 13th time and first since 2/8/20, as he missed all of last season with a left foot injury.
– Walker, who eclipsed 1,000 minutes played and 100 free-throw attempts at Miami, scored in double figures for the 15th time as a collegian.
– J. Miller moved past 900 points in his career.
– Freshman guard Wooga Poplar earned his first official playing time as a Hurricane.