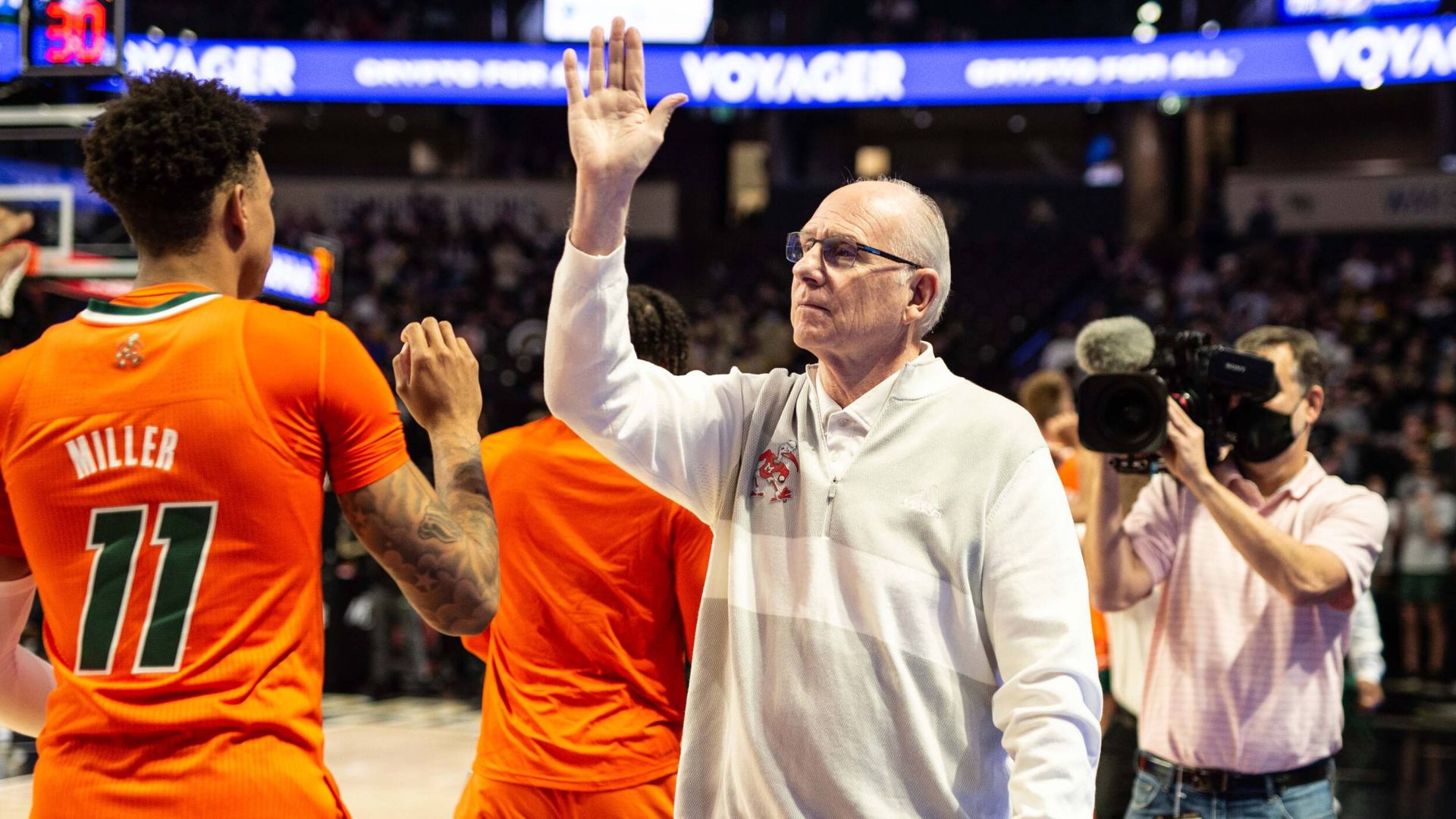 Shipping up to Boston

CORAL GABLES, Fla. – The University of Miami men’s basketball team’s last five games against Virginia Tech have all been wild, wacky and weird.

Each game has come down to nearly the final possession, with two going to overtime—including one reaching triple-overtime—and all including memorable shots and plays.

The Hurricanes won, 78-75, in Blacksburg, Va., on Jan. 26 on a half-court buzzer-beater by sixth-year redshirt senior guard Charlie Moore. In the teams’ second meeting this season, though, favor tilted towards the Hokies.

Virginia Tech climbed back from an eight-point deficit in the final 100 seconds Saturday to defeat Miami, 71-70, at the Watsco Center.

“I thought the Virginia Tech players really made big plays. [Sean] Pedulla got a steal, got an assist. [Hunter] Cattoor got a deflection. [Darius] Maddox hit a three. [Keve] Aluma got a dunk,” Miami head coach Jim Larrañaga said. “There were just so many good plays that they made. And we had made a lot of good plays leading up to it, including a Charlie Moore steal that led to a layup and a Kam McGusty baseball pass that led to a Jordan Miller three-point play [opportunity].

“Unfortunately, though, we missed some critical free throws,” Larrañaga continued. “Kam missed a one-and-one, Charlie missed the second, Jordan missed one and Sam missed one of two. When you look back—we’re such a good free-throw shooting team—obviously those free throws could’ve put us over the top.” 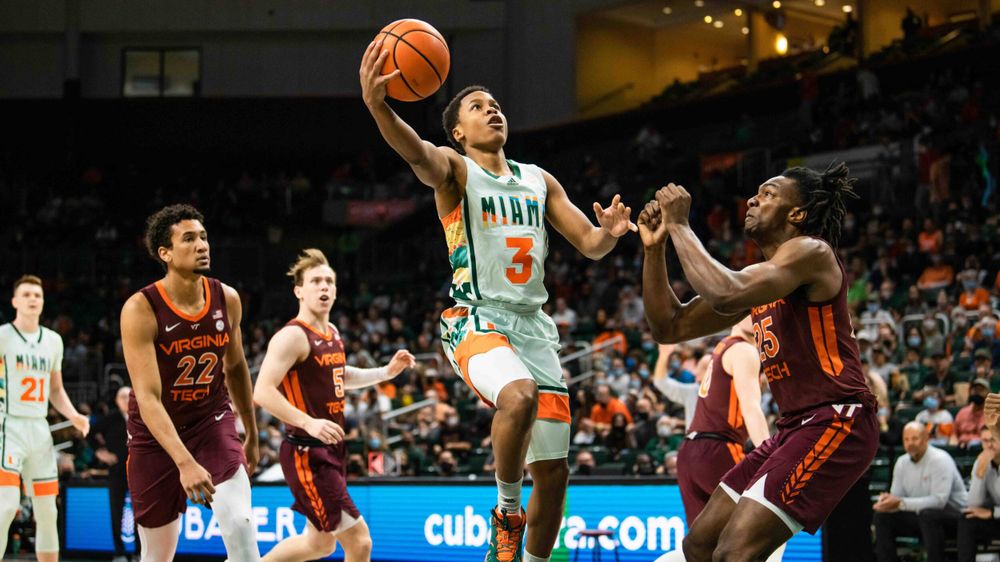 Miami, which lost when leading with two minutes left for just the 16th time in Larrañaga’s 11 seasons, entered the game shooting 75.3 percent from the line and went 3-of-4 in the first half, before logging just a 5-of-9 clip in the second frame.

Despite the bevy of strong performances, the Hurricanes could not close out the win on a sentimental evening.

“It was Senior Day and there was just so much emotion,” Larrañaga said. “We didn’t play out of character—we did a lot of things in character—but, I think, in the end we were in a little bit of a hurry. When you rush, you tend to make mistakes. And we rushed. We just didn’t calmly execute at the end.”

As his team has risen from its No. 12 spot in the ACC preseason poll to the top four of the standings for nearly the entire season, Larrañaga has preached a consistent message: the regular season is a marathon, not a sprint.

Given the success Miami (20-9, 12-6 ACC) has had this season, that communication has often come after victories. This time, though, it is after a loss and remains just as important.

“With three miles to go, we stumbled a little,” Larrañaga said. “Now, we’ve got to regroup in the last two miles.” 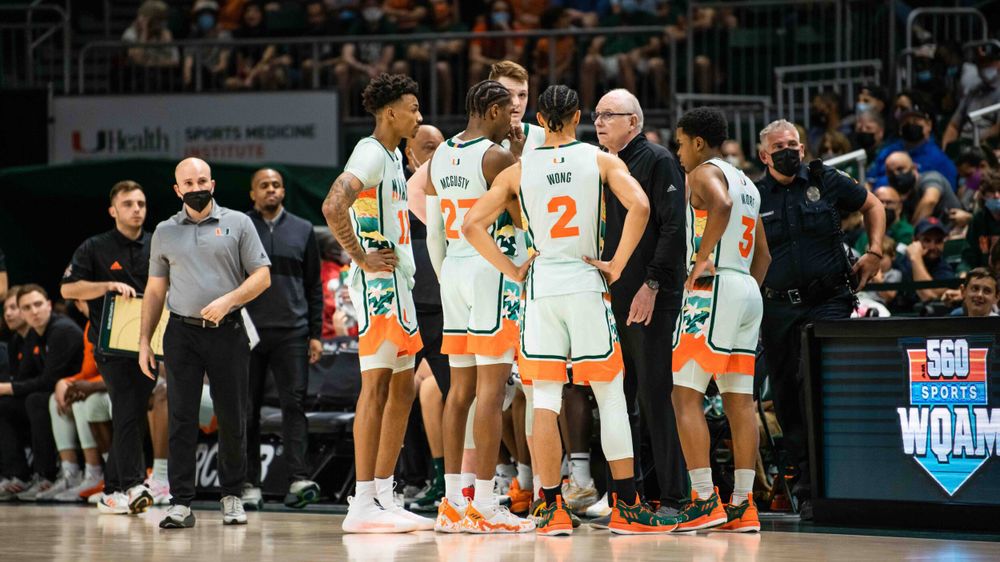 While it is certainly possible there could be some lingering effects from the gut-wrenching setback against the Hokies, Larrañaga knows his team still has a great deal to play for and hopes the focus is on that.

“A win on Wednesday would automatically qualify us for the double-bye,” Larrañaga remarked. “We’d be one of the top-four seeds [in the ACC Tournament]. So, we couldn’t ask for anything more. We’re out of the running for the regular season title now, so the best we can hope for—and our goal has to be—is to get one of those four byes.”

The 9 p.m. start is the Hurricanes’ co-second-latest of the season. It is also their first time tipping off after 8 p.m. since the calendar turned to 2022.

Nonetheless, Larrañaga does not expect to make many changes to the team’s usual gameday process. In fact, the plan is quite the opposite.

“The key with playing a late start is trying to keep your routine pretty much the same,” the two-time ACC Coach of the Year shared. “[You have] your pregame meal four hours before. You do your shootaround the day of the game and be sure the guys are focused with high energy.”

Another unique element of the trip to Massachusetts is that the Hurricanes will not fly back to Miami afterwards. It is the first time all season they have a road game where that is the case.

Instead, the team will travel to Syracuse, N.Y., the following morning. It is the first time since Feb. 26-March 1, 2021, the Hurricanes have a two-leg road trip.

“Well, I think just having a good travel plan is very important and then executing the plan. So far, this year, we’ve been able to do that,” Larrañaga said. “The players have been able to stay focused, even when there is a distraction like [when we were] going to Winston-Salem and had to, basically, regroup and not take off until 9:30 at night. But the guys have handled each of those trips very well. Hopefully, we’ll be able to do the same this week.” 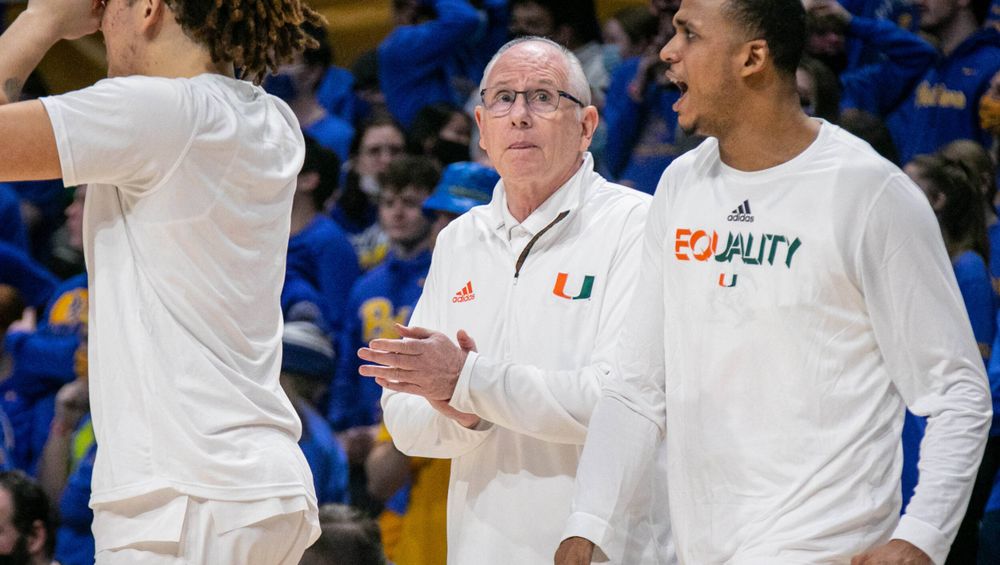 Once Miami arrives at its destination—in whatever city that may be—the team has fared quite well in road contests this season.

“When you look at the teams in our league, Duke and Miami are the only teams in the conference that have eight road victories. We’re both 8-2,” Larrañaga remarked. “I think our guys have focused on trying to be the best that we can be. We lost at Florida State, we lost at Virginia. But the loss at Florida State was by one point and the loss at Virginia, they really just played a great second half, like they did here.”

When Miami arrives at Wednesday night’s game, it will face a Boston College team that is 11-17 (6-12 ACC) on the season, but has won two of its last three outings.

The Eagles are led by graduate student guard Makai Ashton-Langford’s 11.9 points and 3.4 assists per game.

“They play very, very hard at the defensive end of the floor. They have a seven-man rotation that I think is outstanding,” Larrañaga said. “They do a great job. The guys off the bench do a terrific job, [as does] their starting unit. And they’re big; they’ve got two big guys that are a factor. They both can score in around the basket. [James] Karnik can step outside. So, it’s going to be a major challenge and another great ACC game for us.”

The Hurricanes own a 26-27 all-time ledger versus Boston College, including a 10-14 mark on the road and a 13-3 record under Larrañaga. In the most recent matchup, Miami earned an 80-76 home victory on March 5, 2021, to cap last year’s regular season.

Wednesday’s game will be broadcast live on ACC Network HERE, with Mike Monaco and Malcolm Huckaby on the call. Joe Zagacki will have the radio broadcast on AM 560 Sports WQAM HERE, while live stats can be found HERE.

After playing the Eagles, Miami returns to the court Saturday at 1 p.m. at the Carrier Dome against Syracuse, live on ESPNU in its regular season finale.