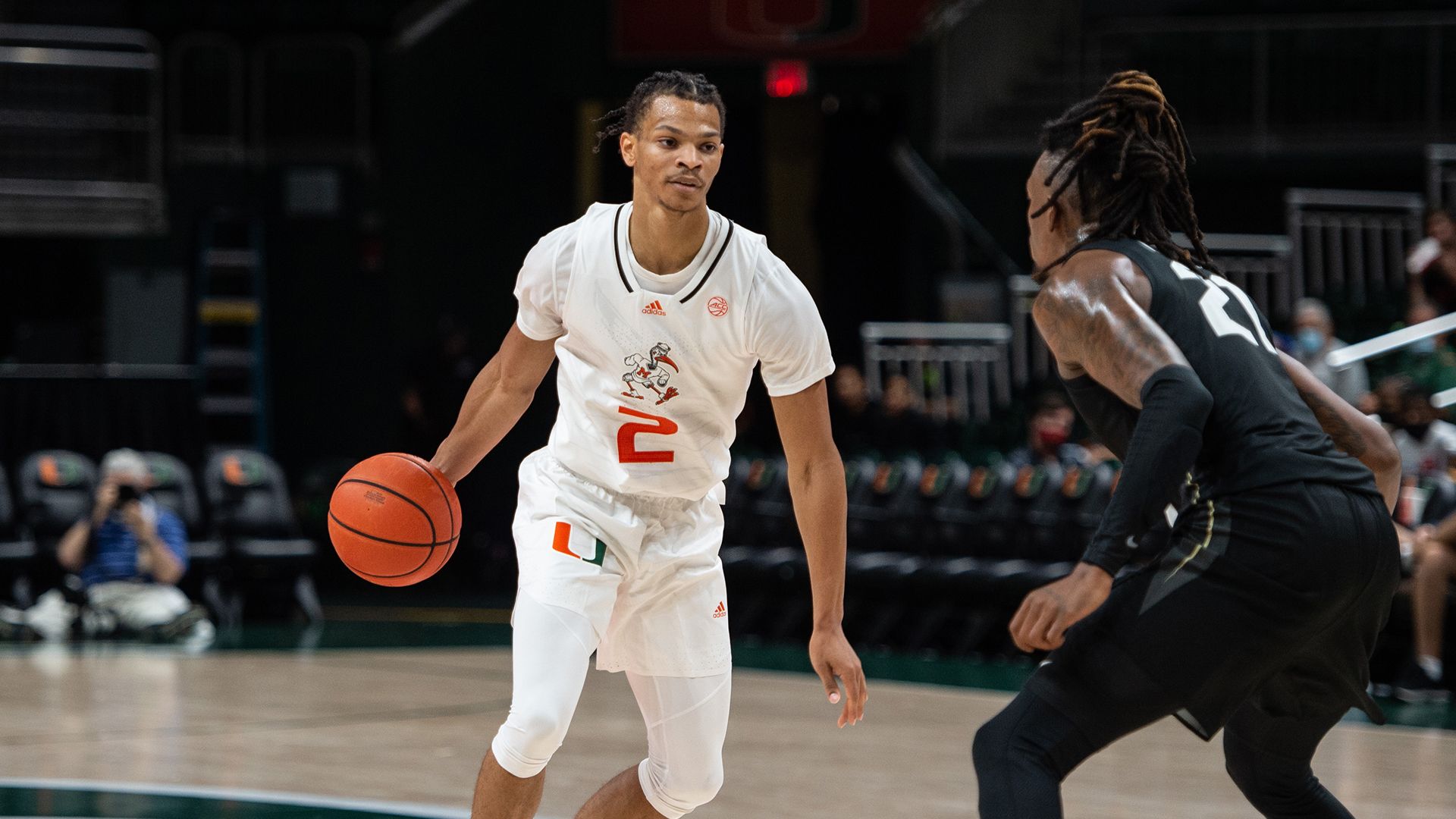 Sixth-year redshirt senior guard Kameron McGusty led Miami (1-1) with a career-high-tying 28 points, shooting 7-of-14 from the field and 14-of-17 at the line, but the Knights controlled the boards and shot a blistering 40.7 percent from 3-point range to record the win.

“I thought UCF came out with a really good focus at the offensive end and made a number of threes,” Miami head coach Jim Larrañaga said. “We got four or five very good looks from three, but just didn’t make them. As a result, we dug ourselves a 10- or 12-point hole and spent the whole time trying to get back in it. We got close, but it was not good enough.”

The Hurricanes missed their initial eight 3-pointers, as UCF (2-0) built an early 16-6 lead before Miami countered by knocking down its first long-range shot and then hitting two free throws to slice the deficit in half with 10:54 on the clock.

The Knights scored nine consecutive points in the first two-and-a-half minutes of the second half to go up by a game-high 17 points, 52-35.

Third-year sophomore guard Isaiah Wong, however, kept the Hurricanes within striking distance, as he scored Miami’s next 15 points in a span of just 3:50, including dropping 10 in the first two minutes. His offensive explosion, which featured a 5-of-5 clip from the floor and a 5-of-5 mark from the line, helped Miami cut the deficit down to eight, 60-52, with 12:21 to go.

The Hurricanes, who shot 59.4 percent (19-of-32) in the second half, made it a two-possession game, 64-58, with 9:01 remaining, but UCF responded with its 10th 3-pointer. Miami continued to fight, though, and got within three points with 11 seconds left after forcing a backcourt turnover and quickly converting it into two points, but UCF held on to take the win.

“We started making threes, we started getting to the foul line a little bit more and we got a few stops,” Larrañaga said of the comeback bid. “The thing that you want when you’re behind is if you foul, you want them to miss at least a few free throws, but they didn’t miss any. They shot over 90 percent from the free-throw line. We were behind and forced to foul. It gave them the chance to score without really having to run any offense.”

McGusty’s 28 points matched the top mark of his career, which he previously set Dec. 21, 2019, versus Coppin State. His 14 made free throws and 17 attempts also set new highs, the former by six and the latter by seven.

Wong finished with 20 points, shooting 7-of-10 from the field and 5-of-5 at the line, adding a team-high five rebounds. Sixth-year redshirt senior forward Sam Waardenburg scored a career-best 16 points, shooting 5-of-7 overall and 4-of-4 from the stripe.

Junior guard Darin Green Jr., paced UCF with 23 points, finishing 9-of-16 from the floor and 5-of-9 at the line. Fifth-year guard Brandon Mahan logged 15 points and made all 10 of his free throws, while junior forward CJ Walker notched a 14-point, 11-rebound double-double. Sophomore forward Isaiah Adams chipped in 12 points for the Knights.

Both teams excelled from the stripe on the afternoon, with the Knights registering a dazzling 88.9 percent ledger (24-of-27) and the Hurricanes posting a 79.5 percent tally (31-of-39) of their own. Both the makes and attempts totals for Miami set or tied its top mark of Larrañaga’s 11-year tenure.

The Hurricanes did have a 25-8 edge in points off turnovers, but UCF had a 40-17 advantage in bench points, led by the showings of Adams and Mahan.

MIAMI HURRICANES POSTGAME NOTES
– The Hurricanes fell to 8-3 all-time against UCF, including 4-2 at home and 2-2 in Larrañaga’s tenure.
– The visiting team in this series has now won each of the last five games played in either team’s home arena, a streak that dates back to Dec. 27, 2002.
– Larrañaga, who entered the game with the ninth-most victories of any active Division I coach, is now 671-465 in 38 years as a head coach, including 201-131 in 11 seasons at Miami.
– For the second time in as many games, Miami used a starting lineup of McGusty, Waardenburg, Wong, fourth-year junior guard Jordan Miller and sixth-year redshirt senior guard Charlie Moore.
– Miami is now 84-9 since the program rebirth (1985-86) against non-Power Five, in-state foes, including 64-4 at home, 16-4 under Larrañaga and 13-3 at home in his tenure.
– The Hurricanes fell to 58-7 in Larrañaga’s 11-year tenure when scoring 80-plus points.
– Saturday marked just the 11th time Miami has allowed 90-plus points under Larrañaga, including the first since 2/8/20 when Florida State did so in Tallahassee, Fla.
– Miami last scored 50-plus points in a half on 12/2/19 when it recorded 50 in the first frame at Illinois and it last allowed 50-plus points in a half on 1/16/21 when it did so in the second stanza against Louisville.
– The Hurricanes used double-digit scholarship players for the first time in nearly four years, dating back to 12/23/17 against New Mexico State in the Diamond Head Classic semifinals in Honolulu.
– Saturday also marked just the seventh time in Larrañaga tenure Miami has played 11 scholarship individuals, including the first since 2/28/15 versus North Carolina.
– Two players, freshman guard Darius Johnson and fifth-year guard Darius Perry, fouled out for the Knights, while Miller and Walker fouled out for Miami, the latter mark giving the Hurricanes more disqualifications in one game than they had all of last season (one).
– The Hurricanes’ 31 made free throws were their most since making 31 on 2/25/15 versus Florida State, tying their top mark under Larrañaga.
– Miami’s 39 free-throw attempts were their most of the Larrañaga era, eclipsing the mark of 38 set on both 1/2/12 against UNC Greensboro and the aforementioned 2/25/15 game versus Florida State.
– The last time the Hurricanes had 19-plus made free throws and/or 23-plus free-throw attempts in a half both came on 2/26/19 in the second session at Wake Forest, when they went 21-of-26.
– Miami last had two 20-point scorers on 3/5/21 against Boston College, when McGusty (27) and Nysier Brooks (21) achieved the feat.
– Before scoring 15 points in under four minutes, Wong had just nine total points on the season through three halves of play.
– McGusty’s prior career high in made free throws was eight, set on 1/7/17 at Kansas State, when he was still at Oklahoma, while his previous high in attempts was 10 on 12/8/20 versus Purdue.
– The 17 attempts for McGusty tied for the third-most by a Hurricane since the program rebirth (1985-86) and marked just the sixth time since then a Miami player reached that mark, though he is just the third individual to do so.
– McGusty, who surpassed 1,250 points, 250 free-throw attempts and 200 made free throws as a collegian, recorded 20-plus points for the 15th time, including the ninth as a Hurricane and second this year.
– In addition, McGusty scored in double figures for the 65th time, including the 37th at Miami and second this year.
– Wong, who eclipsed 100 assists as a collegian, notched double-digit points for the 34th time and 20-plus points for the 15th time, including the first this season in both categories.
– Waardenburg, who moved past 350 points and 2,000 minutes played at Miami, surpassed his prior career best of 15 points, which he set multiple times, most recently on 2/8/20 at Florida State.
– The is the second time in Waardenburg’s career, in which he now has scored 10-plus points 14 times, he has posted back-to-back double-digit point totals, joining 12/2/19 at Illinois and 12/14/19 versus Alabama A&M, and the 26 points he has scored in those two games are the most he has ever tallied in consecutive contests.
– Freshman guard Bensley Joseph earned his first collegiate minutes and scored his first basket on a 3-pointer with 25 ticks left.