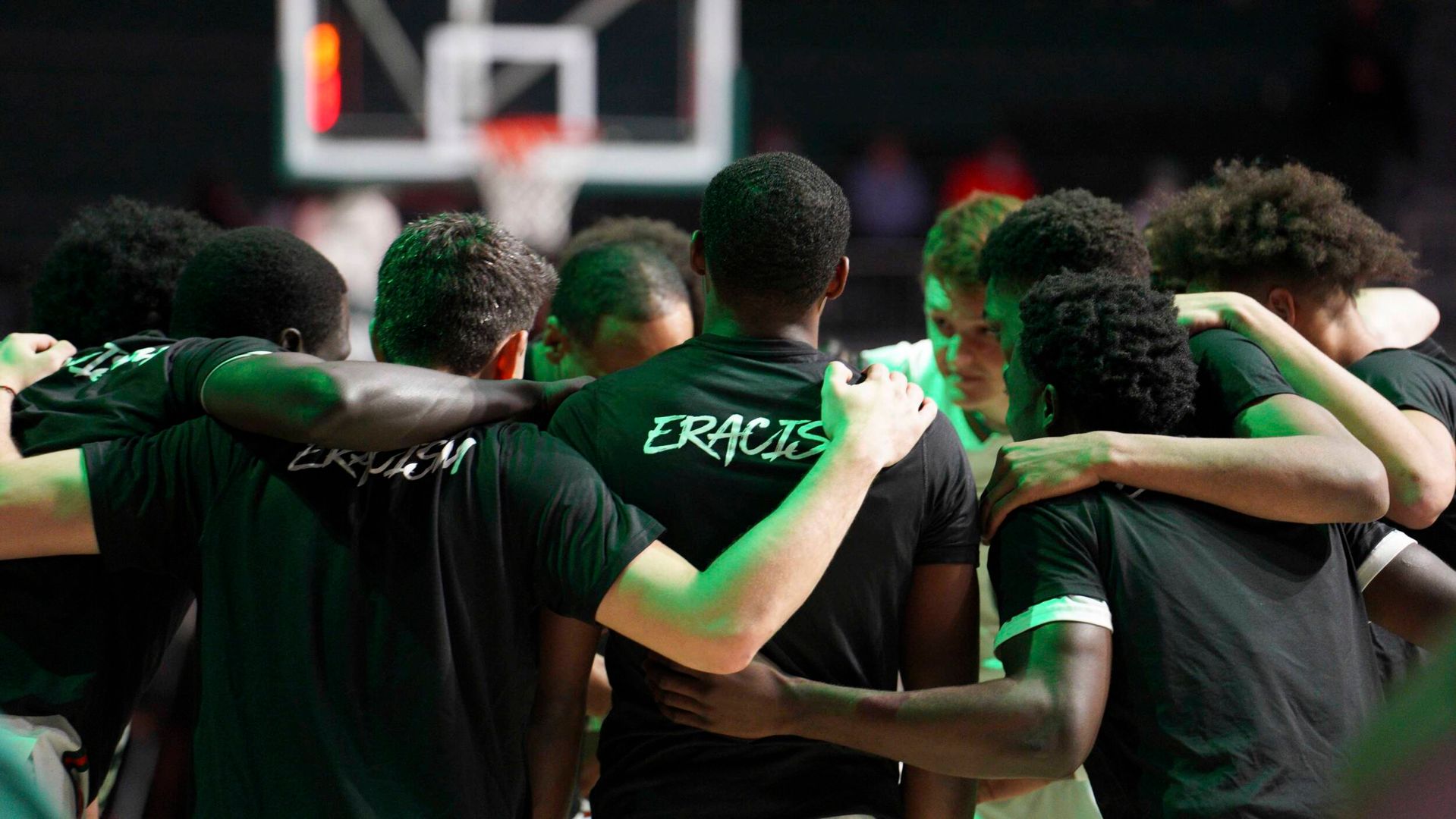 The 11th-year University of Miami men’s basketball head coach led his team to a 79-70 victory over Georgia Tech, giving him 100 ACC regular season victories. He is just the 14th coach in the 70-year history of the league to achieve that mark.

It was a milestone victory that led to some reflection for the two-time ACC Coach of the Year on all he has accomplished and who helped him get to that figure. 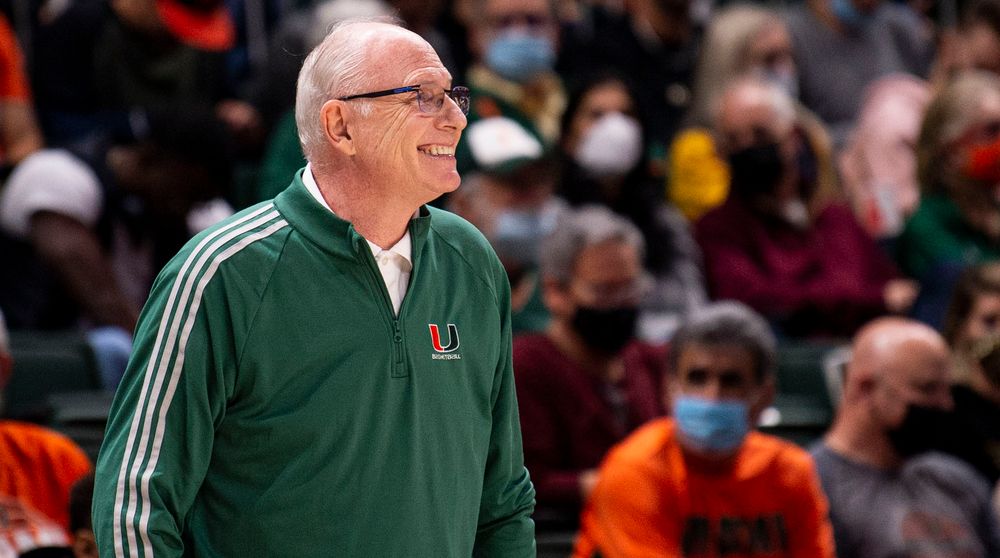 “Well, honestly, it means that I joined two coaches that I worked with for a long time, Terry Holland and Dave Odom, who are both on that list,” Larrañaga shared. “I feel very fortunate that I’ve been able to survive this business as long as I have and be given great opportunities to continue coaching such good players and work with such good assistant coaches. My staff does a fantastic job of recruiting the right student-athletes and then teaching them, coaching them and mentoring them throughout their time here at Miami.”

Miami (17-7, 9-4 ACC) managed to earn the victory despite being without 20-game starter Jordan Miller, as the fourth-year junior guard sat on the bench in street clothes with a right leg injury. Two frontcourt players rose to the occasion in his absence.

Sixth-year redshirt senior forward Sam Waardenburg turned in arguably his finest collegiate performance, notching 19 points, a co-season high eight rebounds and a career-high-tying five assists in a season-best 38 minutes. Third-year sophomore Anthony Walker, who earned his first start of 2021-22 on the day he turned 21, tallied 12 points and a season-high-tying eight rebounds, finishing 6-of-10 from the floor to tie a career high in makes in a co-season-high 26 minutes.

“That was the key to our success against Georgia Tech. When you’re playing against a team that tries to steal the ball constantly and disrupt your offense, players have to step up and score the ball,” Larrañaga said. “Sam did that, both attacking the rim—making a layup, getting some offensive rebounds—and then also hitting some threes. Anthony did it posting up, getting a fast-break dunk and being available a lot on offense, which really helped us.” 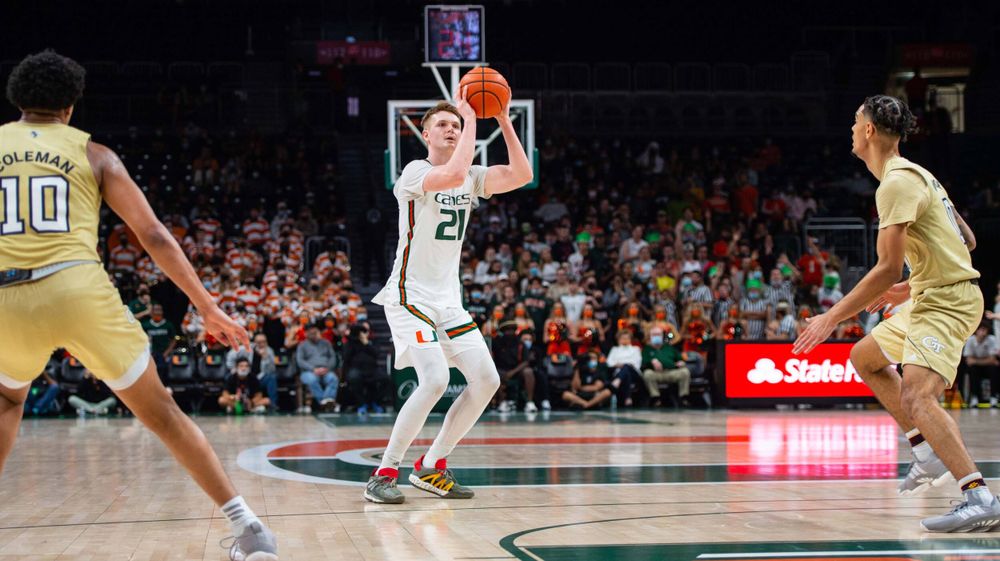 Three other Miami players scored in double figures, as five Hurricanes notched 12-plus points for the second time this season. Sixth-year redshirt senior guard Kameron McGusty scored all 17 of his points in the second half, while third-year sophomore guard Isaiah Wong had 14 points and sixth-year redshirt senior guard Charlie Moore tallied 13 points to go along with a co-game-high five assists.

The balanced scoring helped Miami storm back for a victory after trailing by 14-plus points for the third time this season. The Hurricanes trailed by 14 with under six minutes left in the first half and still faced a four-point deficit in the final 10 minutes of the game.

Miami, however, turned in a quality second-half showing to snap a two-game skid and sweep the reigning ACC Tournament champion.

In addition to taking better care of the basketball, the Hurricanes also got a boost from their home crowd once again.

The Miami faithful helped the team rally back from an eight-point deficit to win at the Watsco Center for the fourth time, all in ACC play.

“I think being at home helped us. If you recall, many of our comebacks have come at home,” Larrañaga remarked. “Syracuse, we were down. Clemson, we were down. Last night, we were down. A lot of credit belongs to the fans—especially the students—who cheered us on. As soon as we got things headed in the right direction, they created the energy in the Watsco Center that helped us overcome those deficits.” 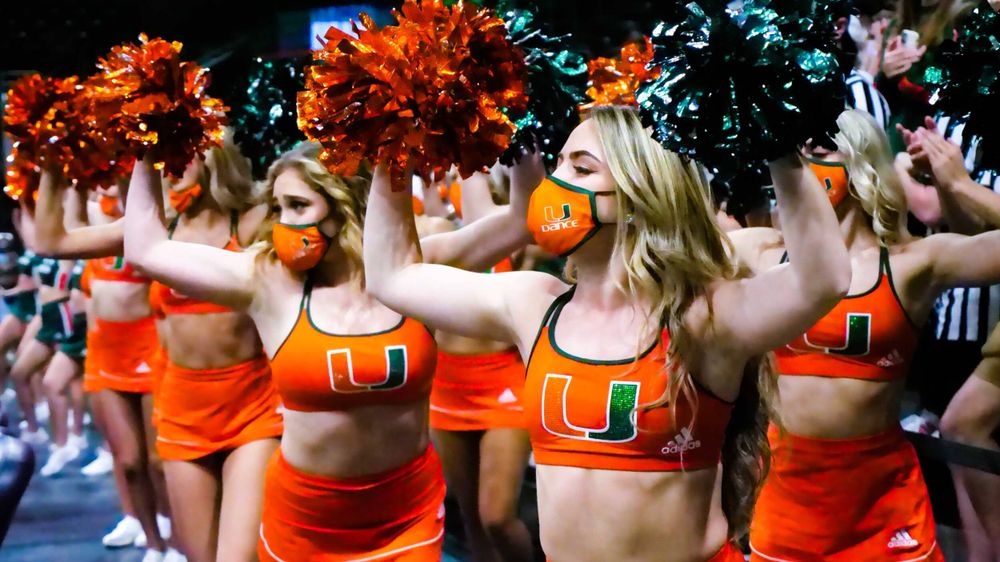 If Miami falls behind in its next game, it will not have a helpful home crowd to rely on, but rather a hostile one.

The Hurricanes’ next game is Saturday at 3 p.m. against RV/No. 25 Wake Forest at Lawrence Joel Veterans Memorial Coliseum in Winston-Salem, N.C. It is a matchup of two teams in the top four of the ACC standings who were both picked to finish in the bottom four in the preseason poll.

The Demon Deacons are 20-5 (10-4) on the season and lead the conference in wins. In addition to their No. 25 spot in the Ferris Mowers Coaches Poll, they also rank No. 28 according to KenPom, which ranks its offense and defense both in the top 50 nationally.

“Wake Forest has the ingredients that a coach loves to have, very similarly to what we had in 2013,” Larrañaga said. “They have the premier player in the league—the leading scorer and leader in assists—in Alondes Williams. He is their point guard and quarterback. When you have a guy who is that proficient at scoring and passing, he sets up his teammates extremely well. They also happen to have [one of the] biggest frontcourts with Dallas Walton, Jake LaRavia, Isaiah Mucius and Khadim Sy. They are very big and skillful up front.

Wake Forest is 9-2 in its last 11 games. That stretch started three days after a loss at Miami on the first day of 2022.

The Hurricanes, with Waardenburg unavailable due to COVID-19 protocols, earned a 92-84 victory. That is the highest point total of the season for Miami, which shot a season-best 61.5 percent (32-of-52) in the game, and is the second-highest mark Wake Forest has allowed. 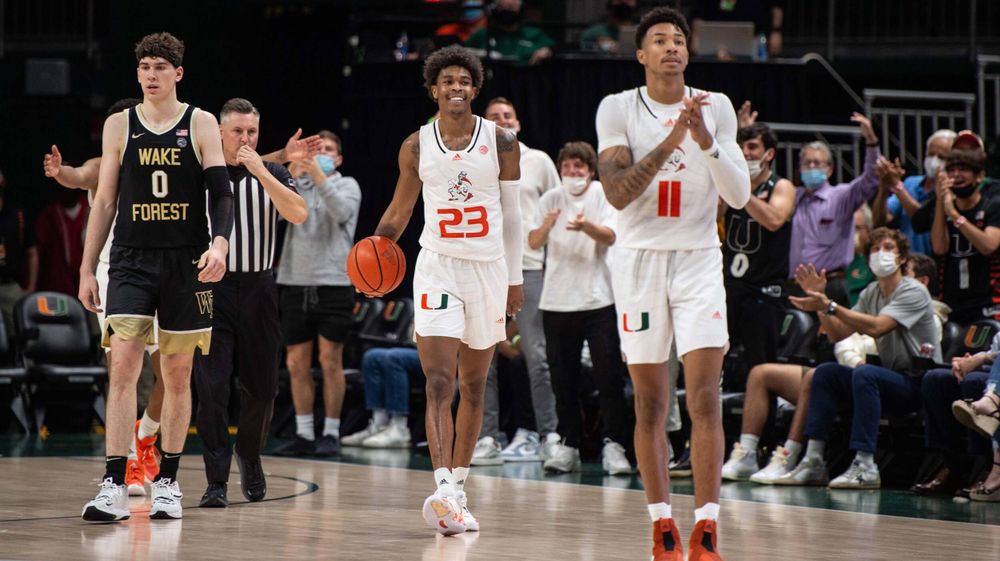 While the Hurricanes might have experience playing and defeating the Demon Deacons already this year, Larrañaga knows the team his players will see Saturday is not the same one they did six weeks ago.

“Well, I thought they were really good when we played them the first time and they’re even better this time,” he said. “And they’re better because they’ve had more games under their belt to figure out what they want to do and Alondes Williams has grown into his role as the premiere leader in the conference. They’re a tough out for anybody.”

Each of the last 12 campus-site meetings between the two programs went to the home team, a stretch that dates back to the start of Larrañaga’s tenure in 2011-12.

“My coaching staff and I will have to put together a great game plan and the players are going to have to execute that because Wake Forest is the most difficult place for us to get a win,” the 2013 Associated Press National Coach of the Year said. “[I am in] my 11th season at Miami and we’ve never won at Wake Forest. So, it would be great if we could turn the tables on them Saturday.”

Miami’s game in Winston-Salem will be televised live on RSN—that is Bally Sports Sun locally—with Evan Lepler and Mike Gminski on the call. A full affiliate is available HERE and it can also be seen on WatchESPN, subject to blackout, HERE. Joe Zagacki will have the radio broadcast on AM 560 Sports WQAM HERE, while live stats can be found HERE.

Following its contest against Wake Forest, the Hurricanes travel to Louisville, Ky., for a second consecutive road affair, this one slated for Wednesday at 7 p.m. against Louisville, live on RSN from the KFC Yum! Center.