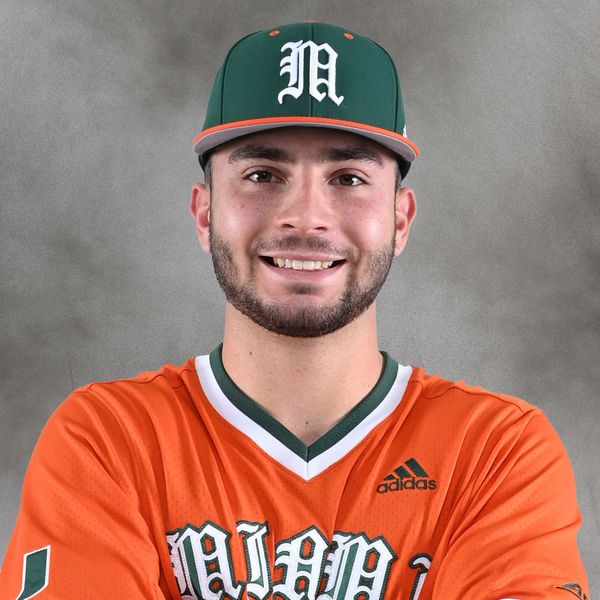 True Freshman (2021): Played in 40 games, making 10 starts in his debut season with the Hurricanes…Saw action at first base and in right field…Hit .298 (17-for-57) with 12 runs scored, three doubles, three homers, six RBI and a stolen base…Recorded a pair of multi-hit games and one multi-RBI performance…Ended the season on a season-best five-game hitting streak…Made his Hurricanes debut on Feb. 19 at #1 Florida, scoring a run as a pinch runner…Recorded first collegiate hit, a solo homer, while making his first career start on Mar. 6 at NC State…Became first Hurricane since Alex Toral in 2018 to homer in his first collegiate hit…Doubled and homered while scoring a season-high two runs and adding two RBI in a 2-for-3 effort vs. FAU (Mar. 9)…Had a base hit against rival Florida State (Mar. 20)…Had an RBI double and scored a run vs. Duke (Apr. 4)…Hit safely in three straight games as pinch hitter: Apr. 11 at Pitt, Apr. 14 vs. FGCU and Apr. 18 vs. Clemson…Homered in win over Appalachian State (May 8)…Singled and had first career stolen base in series-clinching win over Georgia Tech (May 16)… Had a base hit in victory at Louisville (May 21), starting his season-long five-game hit streak…Singled off the bench in ACC tournament game vs. Florida State (May 28)…Had a base hit in NCAA tournament debut vs. South Alabama (June 4), making first career start in right field…Recorded second multi-hit game of the year in NCAA tournament loss to USF (June 5)…Singled in NCAA tournament loss to South Alabama (June 6)…Named to All-Gainesville Regional team after hitting .308 in three games.

Personal: Son of David and Haika Kayfus…Majoring in business management.