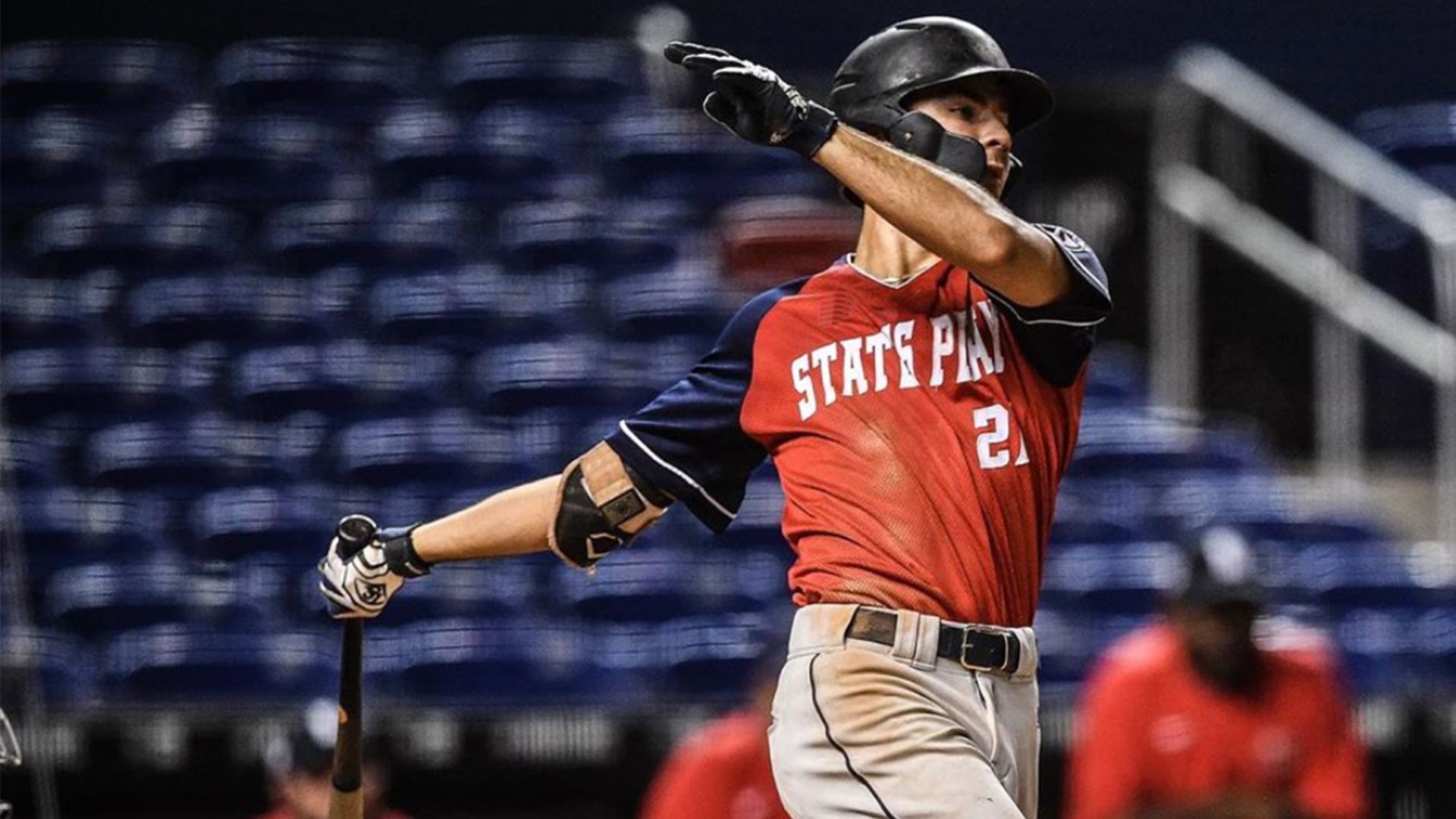 Kayfus Back in the Swing of Things

A first baseman with a smooth left-handed swing, Kayfus has absolutely raked at every level while earning multiple first-team all-district honors in high school and leading the Collegiate League of the Palm Beaches in hitting over the summer.

But Kayfus is a Miami Hurricane now and he is looking forward to a new challenge: hitting collegiate pitching.

“I’m excited to try to hit off the pitching that we have,” Kayfus said. “We have a lot of great pitchers coming back and we are the number one recruiting class. I think pitching was a really good factor in our 2020 recruiting class getting that ranking so, I want to hit off our pitchers.”

Hitting has always come naturally to Kayfus, who was batting .556 before the Covid-19 pandemic cut short his senior season at Palm Beach Central High School.

“I really think it’s something that comes from within because I’ve never had an actual hitting coach and I’ve never been to any lessons,” Kayfus said. “Even in summer ball or even high school baseball, coaches really never would try to correct my swing; they would just say ‘go out and play,’ and that’s worked for me so far.” 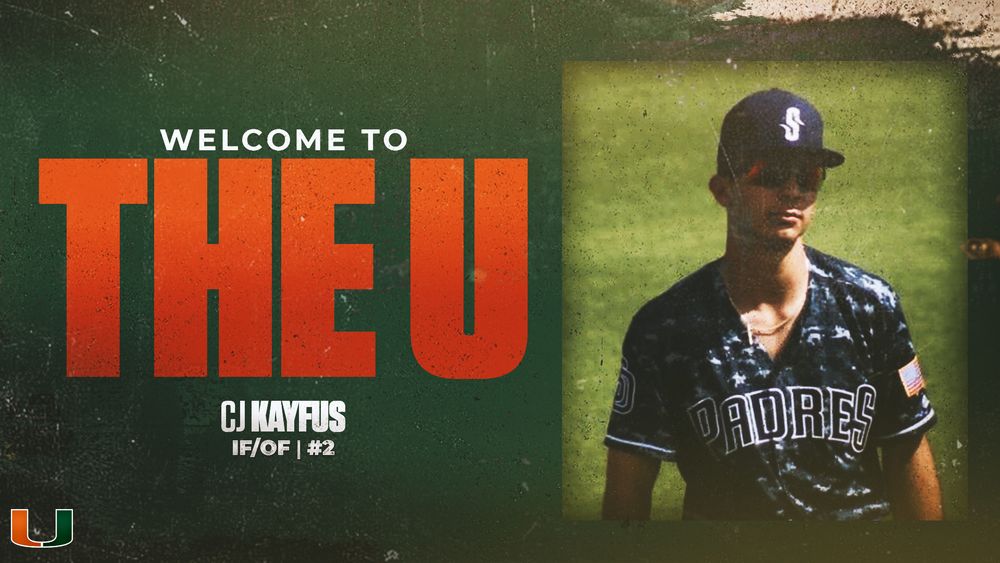 The 6-foot, 175-pound Kayfus believes simplicity is the key to success at the plate and he takes that approach every time he steps in the batter’s box.

“I try to make it as simple as possible,” Kayfus said. “You don’t want to overwhelm yourself, because baseball is already hard as it is and is probably the hardest sport to play from a skill standpoint. I’ve always tried to be as simple as possible and try to hit the ball up the middle because you have more room for error. You can be late and hit the ball to the opposite field or be early and pull the ball.”

His hitting ability caught the attention of major college programs and Kayfus was a heavily recruited prospect early in his high school career. While powerhouse programs from all over the country worked hard to secure his commitment, one school stood out above all the others.

“In the whole recruiting process, I also visited other schools and nothing compared to Miami,” Kayfus said. “The coaching staff made you feel at home. You weren’t just a number to the coaches at Miami, you were actually their players and it felt like a family. I just knew that’s where I wanted to go.”

Kayfus committed to the Hurricanes in November 2017, just months into his sophomore year of high school, and officially signed with Miami in the fall of 2019.

“Committing as a sophomore, you feel some stress taken off your shoulders. You can just worry about playing baseball and don’t have to worry about recruiting anymore,” Kayfus said. “It was great to commit to Miami and I was so excited to sign as a senior. It felt like forever between when I committed and finally signing a couple years later. It was a very exciting experience.” 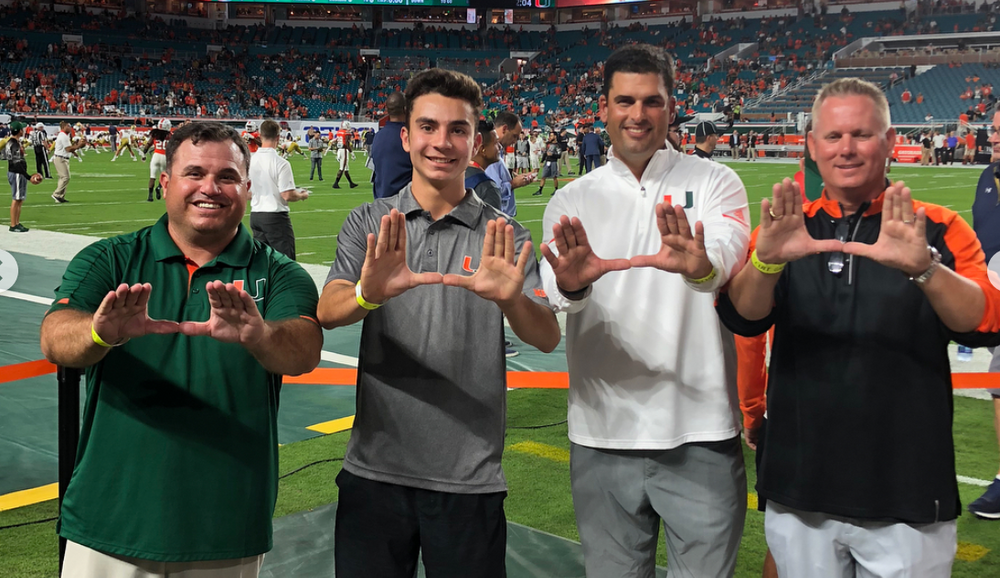 Head coach Gino DiMare was Miami’s hitting coach and recruiting coordinator when Kayfus committed to the Canes. Now entering his third year at the helm of the Hurricanes, DiMare is excited to see what the young hitter can do at the college level.

“He’s not a one-dimensional player,” DiMare said. “On the hit side of it, he’s got bat-to-ball skills, so he’s a guy that can square up a lot of balls. He’s a line drive kind of guy that can hit the ball fields, just a pure hitter and hopefully with strength will come more power. He will be a guy that can hit for extra-base hits and knock in a lot of guys because he plays a position in first base that you’d like to get power numbers out of that. He’s such a good hitter and he’s one of those guys that I’d be surprised if he didn’t find his way in the lineup because he’s got very good bat-to-ball skills and he’s a left-handed hitter, plus he runs and, for a first baseman, runs really well.”

While his hitting ability is superb, Kayfus is much more than just a hitter.

“He’s very, very advanced also defensively, so he’s a guy that’s got skills not only offensively but also defensively. He’s got excellent hands and a very good glove,” DiMare said. “He has played some outfield, which shows you the kind of athlete that he is. But I hold a great deal of value in the fact that if you got a good defensive first baseman, he can save you a lot of runs. We’re going to try and play him in both positions, but right now his primary focus has been first base. CJ is just a very good all-around player, offensively, defensively and can run.”

Kayfus’ game shares some similarities for a former Miami signee who went on to become the 2018 National League MVP, Christian Yelich. If you’re going to look up to an athlete on the baseball field, an MVP is a great example to follow.

“Yelich is one player I like to watch because I like how he plays the game,” Kayfus said. “I try to model my game after him because I think we have some similarities and he’s already made it and he’s one of the players in play baseball right now. I think that’s a great role model to have as far as playing the game.”

A former first baseman/outfielder with advanced bat-to-ball skills, speed and projectable power, Yelich never made it to Miami after being selected by the Marlins with the 23rdoverall selection in the 2010 MLB Draft, but DiMare believes Kayfus has some similarities with the former Miami signee turned MLB All-Star.

“That’s a good guy that he’s looking up to. The bat-to-ball skills and certainly the fact that he’s athletic and runs are similarities to Yelich,” DiMare said. “Of course, Yelich was a big, long and lanky kid that was around 6-3 or 6-4. CJ is six feet tall, so not the same as Yelich in terms of size, but I would say that that’s a nice comparison just the fact that Yelich is an outfielder and I think Kayfus can do both. He could do both, but for right now, we’re looking at him at first base. That’s a good comparison and definitely a good guy to look up to.”

Much like Yelich, who played both first base and outfield in high school, Kayfus is confident he can help the Hurricanes anywhere they ask him to go.

“I feel like I can go play anywhere. Obviously, I’m limited since I’m a lefty, but I feel comfortable at first base and in the outfield,” Kayfus said. “In high school, I also pitched a little. I definitely feel comfortable anywhere I am asked to play and will go play wherever they need me to play.”

Beyond his ability on the diamond, DiMare loves what Kayfus brings as a person and teammate and believes that will be a great asset to the program.

“The makeup and the character thing, that is off the charts in that department. From what I’ve seen and gotten to know CJ, he seems to have those qualities,” DiMare said. “Obviously, we’re getting to know these guys even more now and we will get to know even more when we start practicing as a team in a few weeks and start intrasquading and scrimmaging. CJ seems to have that those qualities of a high makeup guy and very good character kid in addition to being a good player.”

While the COVID-19 pandemic cut short baseball at every level in 2020, Kayfus had the opportunity to play with the Wellington Colts in the Collegiate League of the Palm Beaches this summer. In 14 games, he hit a league-best .444 with six doubles, a home run and 11 RBI.

“I had a little bit of a break since high school season got cut short, but I think being able to play definitely gives me an upper hand over the guys who didn’t get to play over the summer,” Kayfus said. “Playing summer ball kept me in the swing of things to keep my body in shape with swinging and throwing. So, it’s not like I came here and had to start from scratch to get ready to play. Overall, I think I had a pretty good experience in the summer league that I played in.”

Playing summer ball was a bit unusual for the incoming freshman, as Miami likes their true freshmen to enroll in summer classes and begin working out in Coral Gables to prepare for their first year of college.

“For a high school kid, normally we like those guys coming in after they graduate to go to summer school here and lift and work out,” DiMare said. “I think they can really develop in those five weeks of going to school here and we didn’t get to do that because those classes were online, so it was good that he was able to play because a lot of leagues were shut down.”

Once he arrived on campus and was given access to Miami’s facilities, Kayfus got right to work. After spending most of the pandemic doing improvised workouts, he was glad to be back in a more traditional setting to optimize his efforts.

“It feels great to be back, especially getting back into the weight room,” Kayfus said. “As soon as COVID started, all the gyms were shut down and I plateaued some with trying to put on weight and trying to put on muscle. Now that we’ve started back up it feels great, especially since that first conditioning we did. I remember I felt really heavy and slow on that first day, but I feel great again now that we are in our routine of working out and conditioning.”

His acclimation to college baseball has been eased by working with some of Miami’s veteran players. Due to social distancing protocols, the Hurricanes have been working in small groups since they returned to campus in August. But DiMare and his coaching staff made sure the groups included veterans and newcomers to make sure

“I’ve been put in a group with Mykanthony [Valdez], [Anthony] Vilar, [Alex] Toral and Raymond Gil and they’ve been showing me a lot. They’ve all been very helpful in teaching me how to properly do the drills in the cages and other things that they’ve learned time playing ACC college baseball.

“Working with the veterans has really helped me and our other new guys learn how we do things here at Miami and it definitely shows the culture we have here as a program,” Kayfus added. “Getting to work with guys who have done it before helps get you ready to play here.”

One of the biggest adjustments has been working on his hitting. After spending most of his baseball career on his own, Kayfus is now working with Miami hitting coach Norberto Lopez and he has had to learn a lot of new drills that he never knew existed.

“It’s a very big jump because I’ve never done any hitting drills and Lopes is really big on some of the hitting drills,” Kayfus said. “It’s been great because I think they’re going to improve my game. All my life, I haven’t been working on drills to improve specific things. I’ve always just been hitting in the cages and trying to hit the ball up the middle. I think working with Lopes is going to make me a much better and more complete hitter.”

With Miami’s first team practice of the fall quickly approaching, Kayfus can sense the excitement about finally playing for the Hurricanes.

“It’s going to be different looking at the stands and seeing all the fans. Coming from my high school, we just had mostly parents in the stands. I’m excited to get a chance to play here at The Light in front of all our fans.”