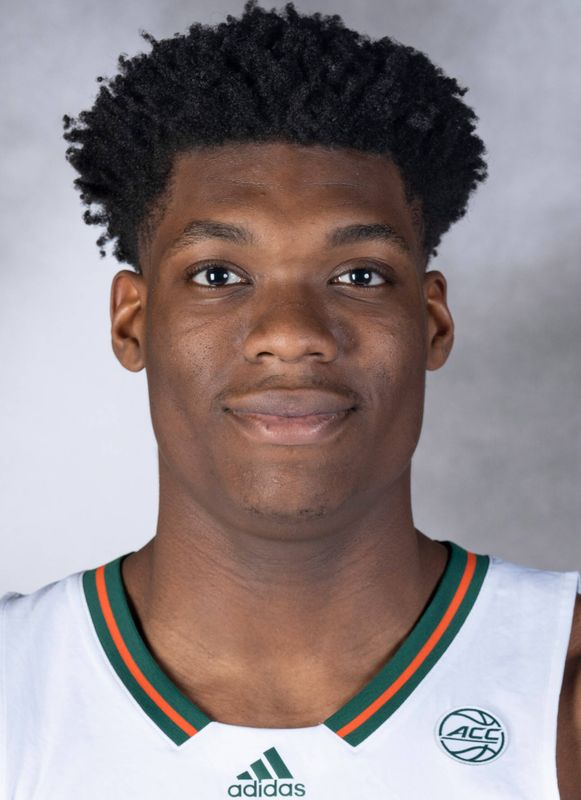 As a Third-Year Sophomore (2021-22): One of four Hurricanes to play in all 37 games, notching two starts … Averaged 4.9 points, 2.5 rebounds and 0.8 steals per game … Finished third on the team in offensive rebounds (27) and blocked shots (17) … Scored in double figures six times … Led or co-led Miami in blocks on nine occasions, tied for second-most on the team, as well as in rebounding four times, in steals thrice and in assists twice … Opened the year with a season-best 14 points in 22 minutes against Canisius (11/9), also setting season highs in free throws made (five), free throws attempted (seven) and blocks (three), adding two assists … Logged 12 points and two steals in a season-high 26 minutes versus UCF (11/13) … Scored eight points in 20 minutes at Florida Atlantic (11/16) … Tallied eight points against Fordham (12/12) in Brooklyn, N.Y. … Registered 11 points, shot 4-of-4 from the field and blocked two shots in 23 minutes versus NC State (12/29) … Finished with eight points, five rebounds, two assists and two steals in 23 minutes against Wake Forest (1/1) … Tied a career best with three steals at Virginia Tech (1/26) … Amassed 12 points on 5-of-7 shooting, including making both his 3-pointers, against Notre Dame (2/2), adding a season- and team-high eight rebounds … Dished out a career-high-tying four assists at Virginia (2/5) … In his first start of the year, against Georgia Tech (2/9), notched 12 points, a season-high-tying eight rebounds to co-lead all players and two assists in a season-high-tying 26 minutes, finishing 6-of-10 from the floor to set season bests in both categories … Started in the win at RV/No. 25 Wake Forest (2/12) … Compiled seven points, a team-best six boards and two steals in 20 minutes at Pittsburgh (2/22) … Posted 11 points and a career-high-tying three steals against Virginia Tech (2/26) … Led Miami with five boards in the Elite Eight against the eventual NCAA champion, third-ranked Kansas (3/27).

As a Sophomore (2020-21): Season did not count towards eligibility due to COVID-19 pandemic … Appeared in 26 contests, missing one due to injury, and made 16 starts … Averaged 9.6 points, 4.7 rebounds and 1.0 assist per game … Ranked second on the team in blocked shots (22), as well as fourth in both scoring and rebounding … Tied for ninth in the ACC in 10-rebound games (five) and double doubles (four) … In ACC-only action, tied for sixth in the league in 10-rebound games (four) for eighth in double-doubles (three) … Scored double-digit points 14 times, including in 12 of his final 15 appearances, with 15-plus on five occasions … Pulled down five-plus rebounds 10 times, including in six of the last seven games … Blocked multiple shots in five outings … Eclipsed 30 minutes 12 times, including in six of the last seven contests, with 35-plus seven times … Led Miami in rebounding in a team-best nine outings, as well as in blocks nine times to rank second, plus in steals five times and assists once … Posted the most single-game made free throws without a miss (eight) by a Hurricane … Logged 12 points and a career-best three blocks versus FGCU (12/12) … In his first collegiate start, posted a 12-point, career-best 10-rebound double-double against Pittsburgh (12/16), adding two blocks in 35 minutes … Scored a career-high 18 points, made a career-best eight free throws and tied career bests in rebounds (10), blocks (three) and free-throw attempts (eight) versus Jacksonville (12/19) … Tallied 13 points and five boards at Syracuse (1/19) … Did not play against Notre Dame (1/24) due to a right foot injury sustained in practice … Scored 13 points and went 2-of-3 from deep in 36 minutes at No. 16 Florida State (1/27) … Amassed 12 points, seven rebounds and two blocks at Wake Forest (1/30) … Scored 16 points on 6-of-9 shooting in the victory over Duke, setting a career best in made field goals … Recorded a 14-point, 10-rebound double-double at Notre Dame (2/14) … Notched 16 points, shooting 6-of-11, against Georgia Tech (2/20) … Totaled 12 points and seven rebounds versus No. 11/9 Florida State (2/24) … Registered a 13-point, 10-rebound double-double in 38 minutes of action at Clemson (2/27) … Posted eight points and 10 boards in 36 minutes at No. 21/20 Virginia (3/1) … Stuffed the stat sheet with 17 points, seven rebounds, a career-high four assists, two steals and two blocks in 36 minutes in the regular season finale versus Boston College (3/5) … Logged 14 points, nine rebounds and a career-high-tying four assists, while limiting Justin Champagnie to 5-of-20 shooting, in a career-best 39 minutes during the ACC Tournament opening round win over Pittsburgh (3/9) … Posted 15 points, six rebounds and a career-high three steals in the victory against Clemson (3/10) in the ACC Tournament second round.

Personal: Full name is Anthony Edward Walker III … Born Feb. 9, 2001 … Parents are Anthony Walker Jr., and Towanda Hayes … Has a younger brother, Darius … Majoring in sociology with a minor in Africana studies … Started playing competitive basketball as a 15-year-old sophomore … Favorite athlete is Giannis Antetokounmpo … Best sports memory is making a game-winning shot in the state playoffs as a junior … Chose Miami because he felt was a great fit both basketball-wise and academically … Committed to Miami over Kansas, Maryland, Pittsburgh, Seton Hall and VCU.