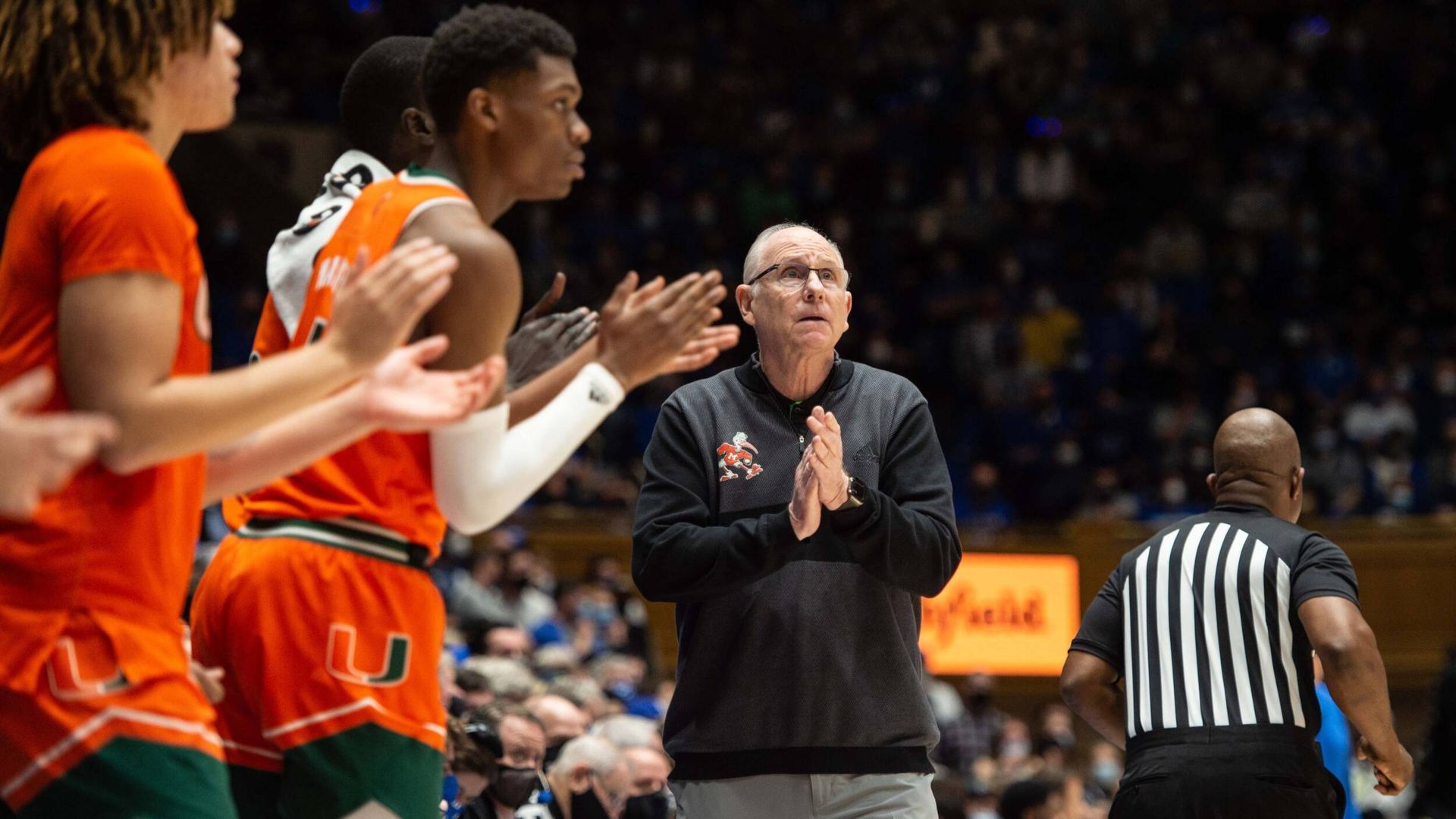 Back on the Road

CORAL GABLES, Fla. – Over the course of a season with 30-plus games, it is only natural for a team to have a few outings in which there is a lull in enthusiasm.

For the University of Miami men’s basketball team, that came Wednesday night in a 68-64 home setback against Notre Dame.

Miami (16-6, 8-3 ACC) conceded three separate 10-0 runs, forced just six turnovers and allowed 44 paint points. Still, though, the Hurricanes sliced a late 14-point deficit down to four, before the Fighting Irish held strong in the closing minute to earn the win.

“I think the biggest thing is, we had played so consistently well on both ends of the floor for a very long time and I thought, last night, we didn’t have the normal energy,” Miami head coach Jim Larrañaga said. “I think you’ve got to really play hard against these teams and, for whatever reason, we appeared to be a step slow last night. Maybe [there was] a little fatigue from so much travel we did last week. … I think the long season is starting to catch up with us.”

Just over 36 hours later, on Friday afternoon the Hurricanes flew to Atlanta. They tallied a 73-62 triumph over Georgia Tech Saturday afternoon and then flew back home Saturday evening. It was, indeed, a considerable amount of travel in a five-day span.

That, however, is life in the ACC. And it stops for no team and caters to no individuals.

Miami’s next game is also on the road; it is set for Saturday at 5 p.m. against Virginia in Charlottesville, Va. Thus, Larrañaga knows it is imperative his players get their legs back.

“We’re traveling again. Travel takes energy from you; it zaps you,” the two-time ACC Coach of the Year said. “And right now, probably the best thing we can do is have short, very productive practices and not be on the court too long where we’re really draining players of their energy.”

One player who did bring full-throttle effort Wednesday night was third-year sophomore forward Anthony Walker, who turned in arguably his best game of the season. 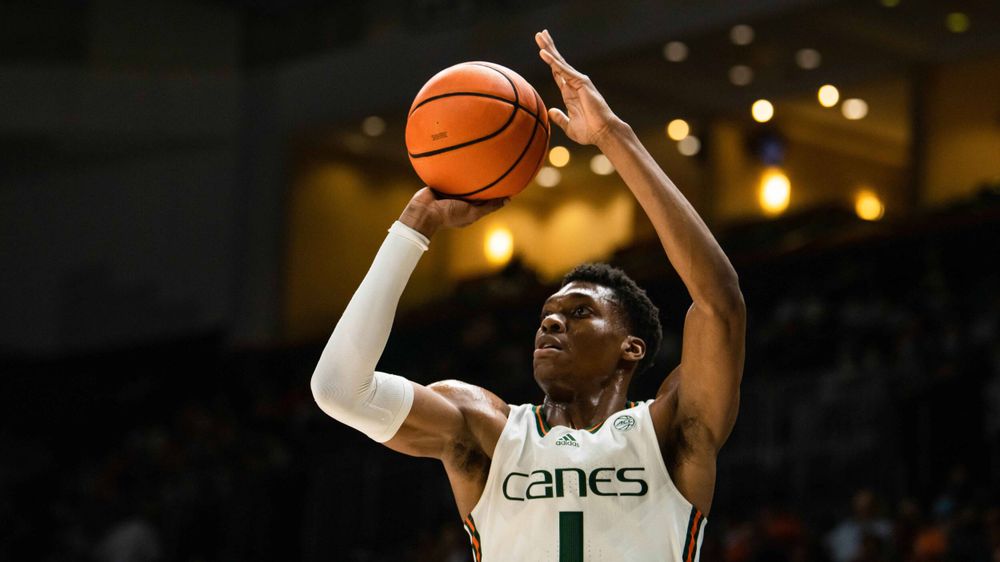 The Baltimore native scored 12 points on 5-of-7 shooting and made both of his 3-point attempts. He also pulled down a team-high eight rebounds to set a new season best.

The point total matched his mark from the prior five games combined, while the rebound total equaled his ledger from the previous seven combined.

“For all these months, we’ve been encouraging Anthony to play up to his physical capability and, last night, he certainly did,” Larrañaga said. “He played with a ton of energy and a ton of confidence. He was very aggressive at both ends and it was great to see.”

Walker, Wong, Moore and the Hurricanes now must get ready for their visit to Virginia on a quick turnaround.

Much of Larrañaga’s tenure at Miami has coincided with one of the two greatest stretches in Virginia history. The other one, Larrañaga was part of.

The many victories and accomplishments, however, are not at the forefront of Larrañaga’s mind when he reflects on his time at Virginia.

“My memories of being at UVA are really about the people that I got to know and enjoy working with,” he shared. “[That includes people like] Terry and Ann Holland, Craig and Margaret Littlepaige, Dave and Lynn Odom, Jeff Jones, the players [such as] Ralph Sampson and Olden Polynice, all the people that made our stay in Charlottesville so much fun. We had a lot of good players and good teams, and guys who worked really hard and were really great people to be around.”

While this Virginia team might not have a player like Sampson—truly, no team does—Larrañaga knows his Hurricanes still have their work cut out for them Saturday evening.

Virginia is 13-9 (7-5 ACC) on the season and ranks top-100 in both offensive and defensive efficiency according to KenPom. Senior forward Jayden Gardner leads the way for the Cavaliers with 14.5 points and 6.8 rebounds per game.

Under the direction of two-time Associated Press National Coach of the Year, Tony Bennett, the Cavaliers won the 2020-21 ACC regular season title.

“Well, Tony Bennett’s teams are always terrific defensively. I think they started out the season with some new pieces and it has taken those guys a little while to adjust to the Virginia style, but I think, right now, they’re playing extremely well,” Larrañaga said. “They’re coming off of a nice win. They’re very physical. Their frontcourt guys at the four and five are much bigger, thicker and bulkier than our frontcourt. So, we’ve got to really pull together to be sure that we can execute our game plan against them.”

Bennett is, of course, known for his pack-line defense. It is consistently amongst the most difficult defenses in the nation to both prepare for and play against.

To Larrañaga, finding success against the Cavaliers on the offensive end actually begins at the other end of the floor. 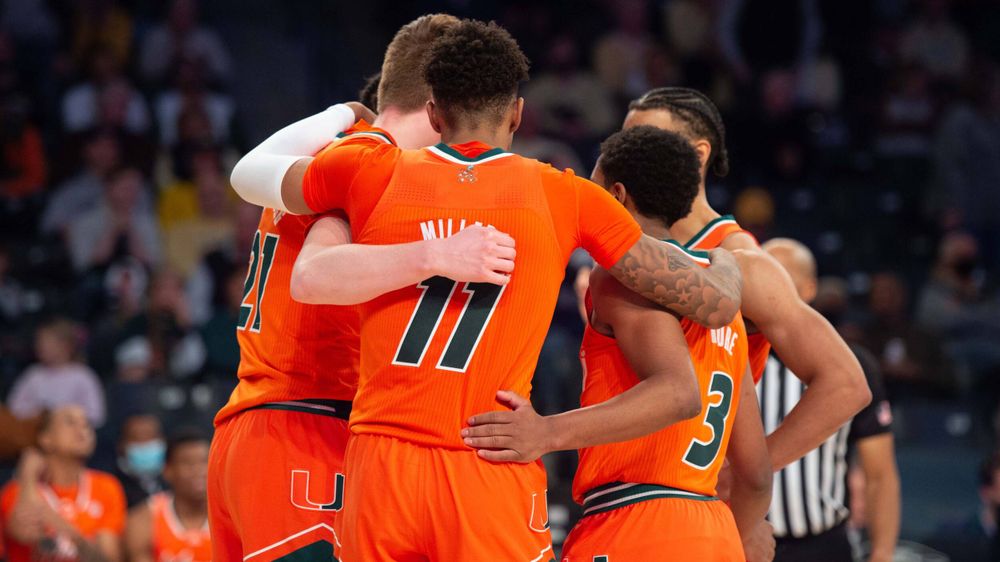 “The first thing is, defensively, you’ve got to keep them from scoring because if they score, they’re going to be able to set their defense every time,” the 2013 AP National Coach of the Year shared. “Even when you force them to miss, they’re very good at getting back in conversion and preventing fast breaks. And we rely very heavily on forcing turnovers and getting into the open court. And when you attack the pack-line defense, oftentimes you can get a 3-point shot, but they’re very good at defending the three. So, a lot of the game is going to depend on whether or not we make threes.”

Saturday night’s content will be broadcast live on ACC Network HERE, with Mike Monaco and Randolph Childress on the call. Joe Zagacki will have the radio broadcast on AM 560 Sports WQAM HERE, while live stats can be found HERE.

Following its meeting with Virginia, Miami returns home to host Georgia Tech, with action slated for Wednesday at 7 p.m., live on RSN from the Watsco Center in Coral Gables.