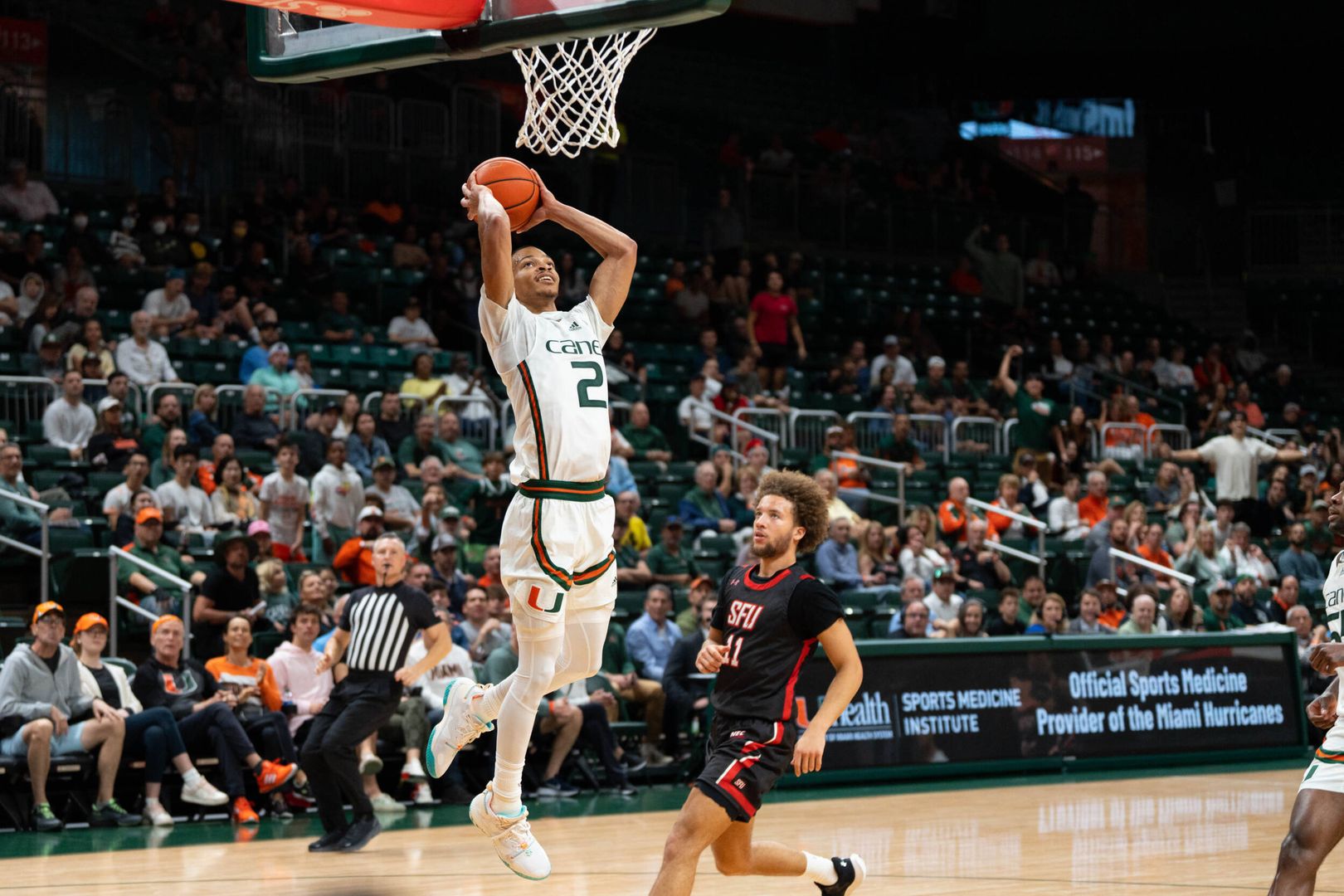 CORAL GABLES, Fla. – Playing its first game as a ranked team since March 2018, the University of Miami men’s basketball team posted a 91-76 victory Saturday afternoon against St. Francis (PA) at the Watsco Center.

After a back-and-forth first half, No. 25 Miami (11-1, 2-0 ACC) controlled the second frame from start to finish to earn the win behind a team-high 22 points from fourth-year junior guard Isaiah Wong.

St. Francis (3-9) used an early 8-0 run to build a 20-14 lead, but Miami countered with seven straight points in 97 seconds to pull back in front. The teams played nearly even basketball the rest of the half and went into the locker room tied at 37 after a fast-break dunk by Wong to beat the buzzer.

Miami (five) and St. Francis (two) combined for just seven first-half fouls, including one in the first 12 minutes, and only eight turnovers—four each way—through 20 minutes.

The Hurricanes scored the first seven points after the intermission, making it a 9-0 run, to go in front, 44-37, with 18:20 to go and never relinquished the lead. Miami eventually extended its advantage up to 19 points, 91-72, with 1:53 remaining. The Red Flash scored the last four points to make it a final 15-point margin.

Along with notching his third collegiate double-double, Wong posted a career-best three blocks and a co-game-high three steals. Sophomore guard Wooga Poplar finished just shy of Wong’s point total, scoring a career-best 20 on 7-of-11 shooting from the floor and a 4-of-4 mark at the line in a career-high 34 minutes.

Sophomore guard Bensley Joseph, making his first collegiate start in place of the unavailable third-year sophomore guard Nijel Pack, turned in his best outing as a Hurricane. The Arlington, Mass., native, who shot 5-of-7 overall, logged career highs in points (14) and rebounds (seven), while matching his top marks in assists (six) and made 3-pointers (four).

St. Francis redshirt junior forward Josh Cohen, coming off his second 40-point performance of the season, tallied 30 points on a 10-of-16 clip from the field and a 10-of-13 mark at the line. He added a co-game-high nine rebounds in the setback.

Freshman guard Landon Moore added a career-best 25 points—he tied his prior high of 16 in the first half alone—on an 8-of-16 ledger from the floor and a 7-of-8 tally at the line for the Red Flash.

Miami is back in action Tuesday at 8:30 p.m. when it hosts second-ranked Virginia in a top-25 matchup at the Watsco Center, live on ACC Network.

Extended the home win-streak to 8-0!

Take a look at the broadcast highlights from today’s win over St. Francis PA 👇 pic.twitter.com/5OMF5EMHR6

MIAMI HURRICANES POSTGAME NOTES
– St. Francis had zero fouls in the first 15 minutes and ended the first half with just two, tied for the second-fewest in a frame by a Miami opponent in the program’s ACC era (since 2004-05).
– After committing zero turnovers in the first 15-plus minutes, St. Francis committed its first giveaway with 4:05 on the clock, then another 29 seconds later and another 19 seconds after that, leading to a 6-0 Miami run in 47 seconds, with all points off giveaways.
– The Red Flash committed just four turnovers in the first half, the last leading to Wong’s dunk, and Miami turned them into eight points at the other end.
– St. Francis is the first team with multiple 20-point scorers against Miami since Syracuse on 1/5/21, when Joseph Girard III (26), Jesse Edwards (20) and Cole Swider (20) all did so.
– Cohen is the first opposing player with a 30-point outing versus the Hurricanes since Boeheim posted the same figure on 3/5/22 at Syracuse.
– The last time Miami had six double-digit scorers was 2/27/18 at ninth-ranked North Carolina.
– As announced prior to tip-off, Pack, who started each of the first 11 contests, missed Saturday’s contest with an illness.
– Miami has now won at least 11 of its first 12 games for the ninth time in program history, including the third time under Larrañaga and first since 2017-18.
– The Hurricanes improved to 12-11 in head coach Jim Larrañaga’s 12-year tenure when tied at halftime, including 1-0 this season.
– Saturday marked Miami’s first victory as a ranked team since 2/7/18, when the Hurricanes, also ranked No. 25/25 then, earned an 87-81 home triumph over Wake Forest.
– The Hurricanes have now posted four straight 80-point showings, tallying 90-plus in two of the last three.
– Poplar’s prior career high of 15 points came on 11/15/22 versus Florida A&M and each of his three double-digit performances prior to Saturday came against in-state opponents.
– Wong has now recorded eight-plus assists in back-to-back games after never previously eclipsing seven in the first 105 outings of his career.
– The last Hurricane with 10 assists in a game was Bruce Brown Jr., on 11/10/17 when he registered a triple-double against Gardner-Webb in the 2017-18 season opener. 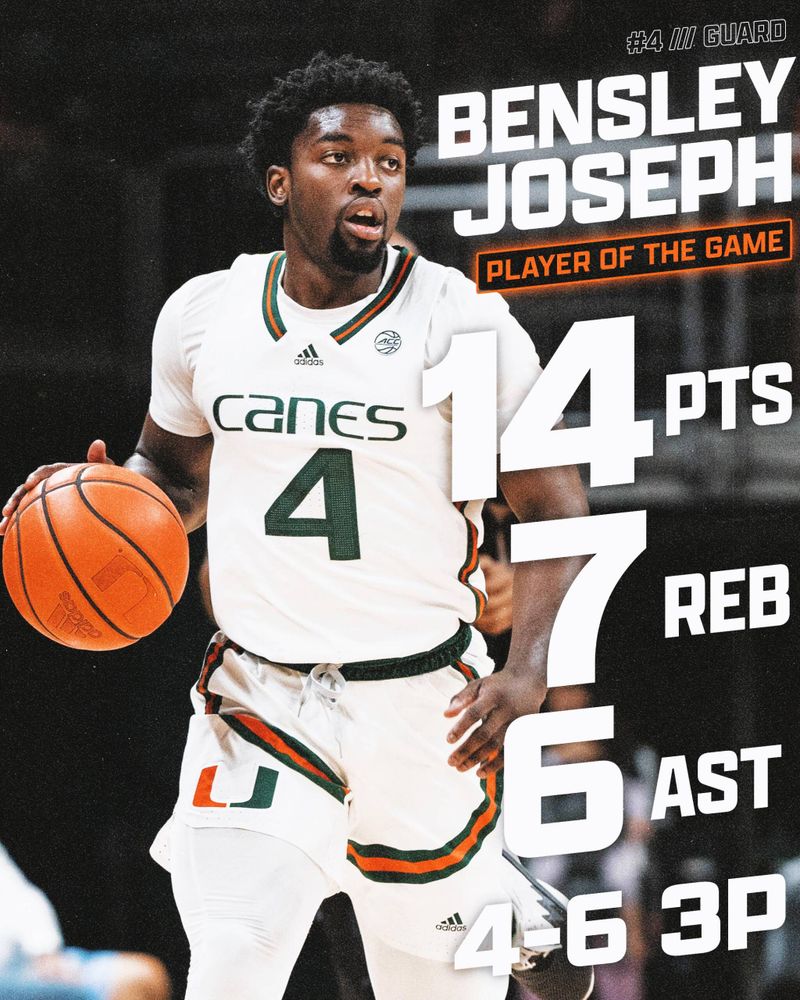