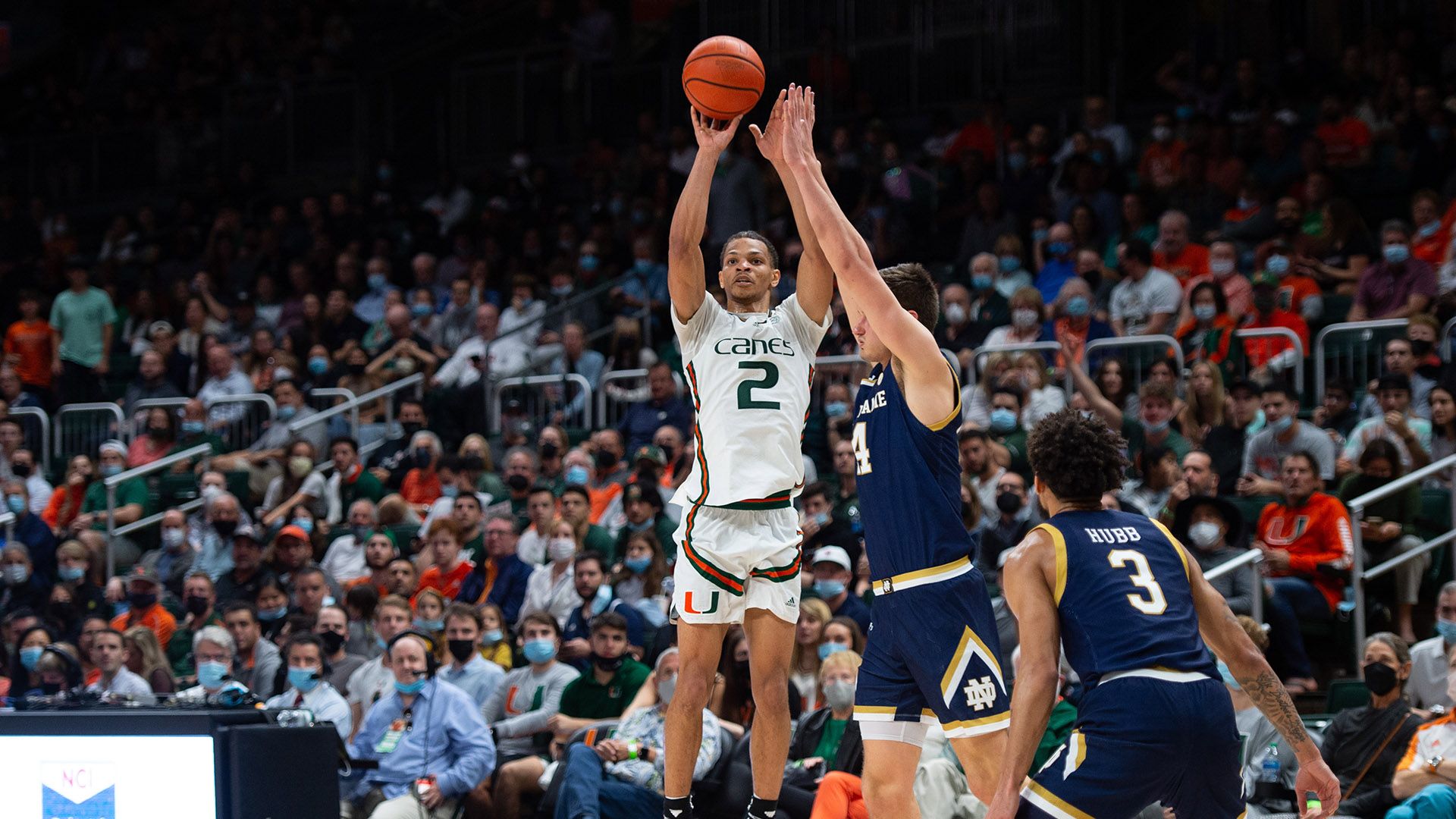 Third-year sophomore guard Isaiah Wong scored a team-high 18 points for the Hurricanes, who could not contain the Fighting Irish’s paint play in the first half or their timely 3-point shooting in the second. The setback, which came in front of a record 1,986 students, marked the first in ACC play by more than one point for Miami (16-6, 8-3 ACC).

“I thought Notre Dame did a very good job of getting the ball inside against our defense,” Miami head coach Jim Larrañaga said. “We tried to take away the three and we did that in the first half, but [Paul] Atkinson got 15 points and our defense was spread out too much. But if you don’t [do that], they hit a bunch of threes. So, you have to pick your poison and we did. We defended the three very well, but couldn’t defend them on the interior.”

The Fighting Irish, who committed just two first-half turnovers, outscored the Hurricanes by two the rest of the frame and took a 30-28 lead into the locker room.

Miami held Notre Dame, one of the best long-range shooting teams in the ACC, to a 1-of-15 clip (6.7 percent) in the opening 20 minutes. However, the Fighting Irish went 13-of-17 (76.5 percent) inside the arc after making 12 of their first 13 2-pointers. Fifth-year senior forward Paul Atkinson Jr., made his first seven field goals and totaled 15 first-half points for the visitors.

After Miami took the lead early in the second half, the Fighting Irish responded with a 10-0 run in 2:13, sparked by back-to-back 3-pointers from fourth-year junior guard Prentiss Hubb. The burst gave Notre Dame a then-game-high eight-point edge, 42-34, with 13:53 left.

Miami cut the deficit to five, 63-58, on a 3-pointer by sixth-year redshirt senior guard Charlie Moore with 2:29 to go, but fourth-year junior guard Dane Goodwin countered with one of his own at the other end to beat the shot clock. The Hurricanes then pulled within four, 66-62, on a Moore fast-break layup with 30.1 ticks remaining, but got no closer the rest of the way.

Moore joined Wong in double figures, totaling 12 points to go along with a co-game-high seven assists, one shy of his season high, and a game-best three steals.

Third-year sophomore Anthony Walker also notched 12 points, shooting 5-of-7 from the floor and making both his 3-pointers. The Baltimore native, who matched his point total from the prior five games combined, grabbed a team-high eight rebounds, three past his prior season high.

Atkinson led all players in both points (23) and rebounds (11), as he finished 11-of-16 from the floor. Hubb scored 15 points, including 13 in the second half, and dished out six assists. Goodwin tallied 14 points, 11 of which came before the break.

Miami held freshman guard Blake Wesley to five points on 2-of-13 shooting, including a 0-of-7 mark from 3-point range, though he did co-lead all players with seven assists.

Both teams committed just six turnovers, tallied exactly five steals and shot 4-of-6 from the free-throw line. Each side also logged 17-plus assists, as Notre Dame had 20 and Miami recorded 17.

The Hurricanes, who did not attempt a free throw in the first 35-plus minutes, posted a 17-7 edge in bench points, but Notre Dame’s 44-26 advantage in the paint proved to be the difference.

“Our defense did not have the energy that we’ve shown in previous games throughout the ACC [season thus far],” Larrañaga said. “So, hopefully we get some rest and bounce back.”

Miami now heads to John Paul Jones Arena in Charlottesville, Va., where it takes the court Saturday at 5 p.m. against Virginia.

MIAMI HURRICANES POSTGAME NOTES
– The Hurricanes moved to 12-15 all-time against Notre Dame, including 6-7 at home and 5-7 in Larrañaga’s tenure.
– Larrañaga, who entered the game with the ninth-most victories of any active Division I coach, is now 686-470 in 38 years as a head coach, including 216-136 in 11 seasons at Miami.
– For the 16th time this season, Miami used a starting lineup of Moore, Wong, sixth-year redshirt senior guard Kameron McGusty, fourth-year junior guard Jordan Miller and sixth-year redshirt senior forward Sam Waardenburg.
– Miami head football coach Mario Cristobal, 10-time NBA All-Star Ray Allen, 2017 MLB All-Star Yonder Alonso, 2021 NFL First Team All-Pro Braxton Berrios and 2017 first-round NFL Draft choice David Njoku were among the fans in attendance.
– The prior top mark for student attendance was 1,682 on 1/22/22 against Florida State, marking the second straight game the record fell.
– Now with 29 steals in ACC play this season, Moore moved from tied to sixth up to fourth place on Miami’s ACC-only single-season list.

– Miami fell to 5-5 when trailing at halftime, including 4-2 in its last six such games and 3-2 in such ACC contests.
– The Hurricanes’ three ACC losses are by a combined six points.
– Notre Dame’s six turnovers marked the fewest by a Miami opponent this season and ended a streak of eight straight games in which the Hurricanes forced 13-plus giveaways.
– Miami had fewer than seven steals for the first time in ACC play and had its streak of 10 consecutive outings with seven-plus come to an end.
– Notre Dame’s three 10-0 runs spanned 2:19, 2:13 and 2:03, good for a 30-0 margin in a total of just 6:35, while Miami outscored the Fighting Irish by 26 points in the other 33:25 of play.
– Atkinson and Goodwin combined for 26 of Notre Dame’s 30 first-half points, shooting a combined 12-of-15 from the floor.
– J. Miller reached 100 steals as a collegian.
– Waardenburg surpassed both 2,500 minutes played and 75 blocks at Miami.
– Wong, who eclipsed both 1,050 points and 100 made 3-pointers in his career, scored in double digits for the 53rd time, including the 20th this season.
– Walker, who reached 450 points as a Hurricane, tallied double-digit points for the 19th time, including the fourth in 2021-22.
– Walker set a season high in both made field goals and made 3-pointers, tying his career best in the latter.
– Moore scored in double figures for the 71st time, including the 14th this year.
– Moore registered his 44th five-assist performance, including his seventh this season.
– McGusty, who now has 999 points at Miami, failed to score in double figures for just the second time in 2021-22.