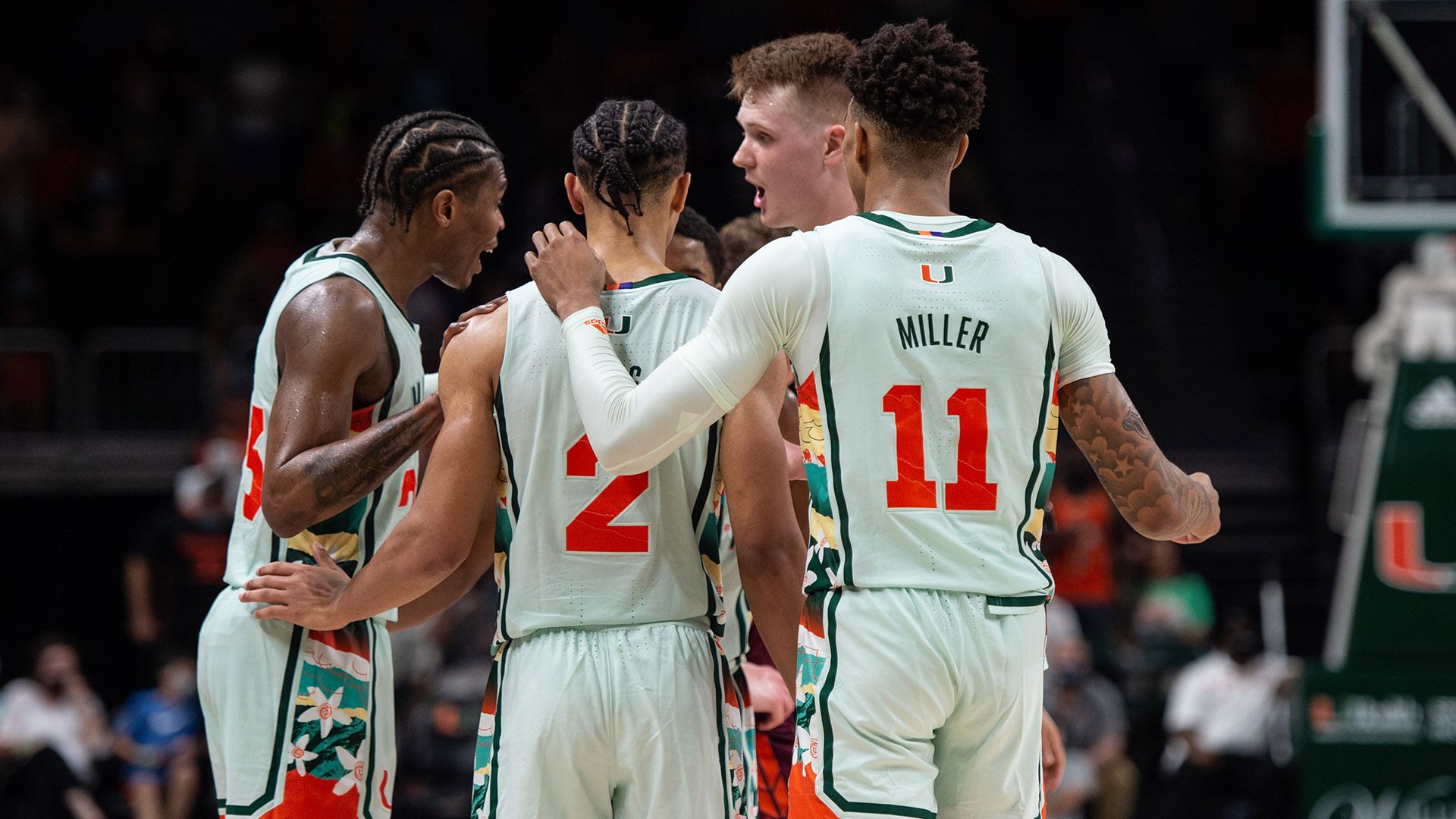 CORAL GABLES, Fla. – After coming back from a nine-point first-half deficit, the University of Miami men’s basketball team led for nearly the entire second session Saturday evening against Virginia Tech, but fell, 71-70, at the Watsco Center.

The Hurricanes held an eight-point edge with under two minutes to play, but the Hokies closed the contest on a 12-3 run over the final 92 seconds to come away with the win. Sixth-year redshirt senior guard Kameron McGusty scored a team-high 15 points for Miami (20-9, 12-6 ACC), which set a program record by tallying 16 steals in an ACC affair.

“Well, I thought it was a great basketball game up until the last 20 seconds,” Miami head coach Jim Larrañaga said. “And even then, we executed pretty well, but Virginia Tech was able to come up with a couple deflections and steals. That’s an individual effort. It was just a great job by them.”

Miami ultimately went 5:01 without a field goal, but then scored seven points on three consecutive makes in 56 seconds, forcing turnovers on both the Hokies’ possessions during that time, to cut the deficit to two, 26-24, with 3:10 to go. Virginia Tech went back up by six, but Miami closed the session on an 11-3 run in the final two minutes to take a two-point advantage, 35-33, into the locker room.

The late burst included back-to-back 3-pointers by McGusty to initially tie it, a layup by third-year sophomore guard Isaiah Wong to put Miami ahead and, after a Virginia Tech 3-pointer, a buzzer-beating 3-pointer from Wong.

The Hokies, the ACC’s leader in long-range shooting percentage, started just 1-of-9 beyond the arc and went 2-of-10 (20.0 percent) in the half, but posted a 12-of-13 clip (92.3 percent) inside it. Miami, though, forced nine turnovers and committed just two, leading to a 13-2 edge in points off giveaways.

An 8-2 run by the Hurricanes early in the second half upped their lead to six, 47-41, with 14:19 remaining. After Virginia Tech, for the second time, got within one, Miami used a 9-3 surge—part of a stretch during which it made five straight field goals—to go up by a then-game-high seven points, 58-51, with 8:33 left.

The Hokies, though, continued to fight back and trimmed the deficit to two, 61-59, with 5:27 on the clock. They then went scoreless for 3:55, though, as Miami hit back-to-back 3-pointers, the latter of which, from sixth-year redshirt senior guard Charlie Moore, upped the lead to a game-best eight, 67-59, with 1:42 to play.

Virginia Tech answered with seven unanswered points to make it a one-point affair, 67-66, with 40 ticks left. Miami then got a fast-break dunk from fourth-year junior guard Jordan Miller three seconds later and added a point at the line from Moore 12 seconds after that to go up by four, 70-66, with 25 seconds remaining, but both also missed a free throw.

A layup from freshman guard Sean Pedulla trimmed the deficit to two with 17 seconds to play and sophomore guard Darius Maddox then stole the inbounds pass and drilled a go-ahead 3-pointer with 12 ticks left. It marked the first lead of the half for the Hokies, who hit their last five shots and got a defensive stop at the buzzer to hold on for the win.

McGusty’s 15 points came on 6-of-12 shooting and he added a game-best four steals to match his season high.

Wong finished with 14 points on 6-of-9 shooting, while Moore tallied 12 points, a season-best nine assists to lead all players and three steals. Third-year sophomore forward Anthony Walker scored 11 points on 5-of-8 shooting off the bench and sixth-year redshirt senior forward Sam Waardenburg tallied 20 points and a career-high-tying three steals.

Redshirt senior forward Keve Aluma paced all scorers with 18 points on 8-of-9 shooting, adding a game-best 10 rebounds.  Pedulla recorded 17 points, including 13 in the second half, although Miami did limit him to 2-of-8 shooting from deep.

Miami shot 50.0 percent (28-of-56) from the floor and had five double-digit scorers for the third time this season, including the second against the Hokies. It also forced 19 turnovers and committed only six, leading to a 26-15 edge in points off giveaways and a 10-0 margin in fast-break points.

The Hokies, however, recorded two of their four steals in the final 40 seconds and shot 58.0 percent (29-of-50), the third-highest by a Miami foe this year, including the second-highest in ACC play. They made 13 of their first 14 2-point attempts through 21 minutes and finished 22-of-27 (81.5 percent) on such shots.

For the Hurricanes, the setback marked their fifth in ACC play by four points or fewer, including their fourth by one possession and their third by a single point.

“The seniors, they actually got us off to a good start. They scored on the first possession; Rodney Miller scored at the rim, which was good,” Larrañaga said. “They’ve contributed so much. They’re very much responsible for us having this season, not just in games, but in practice, [as well as with] their leadership on the court and off the court.”

Up next for the Hurricanes is a two-game road swing to cap the regular season, beginning Wednesday at 9 p.m. against Boston College, live on ACC Network from Silvio O. Conte Forum in Chestnut Hill, Mass.