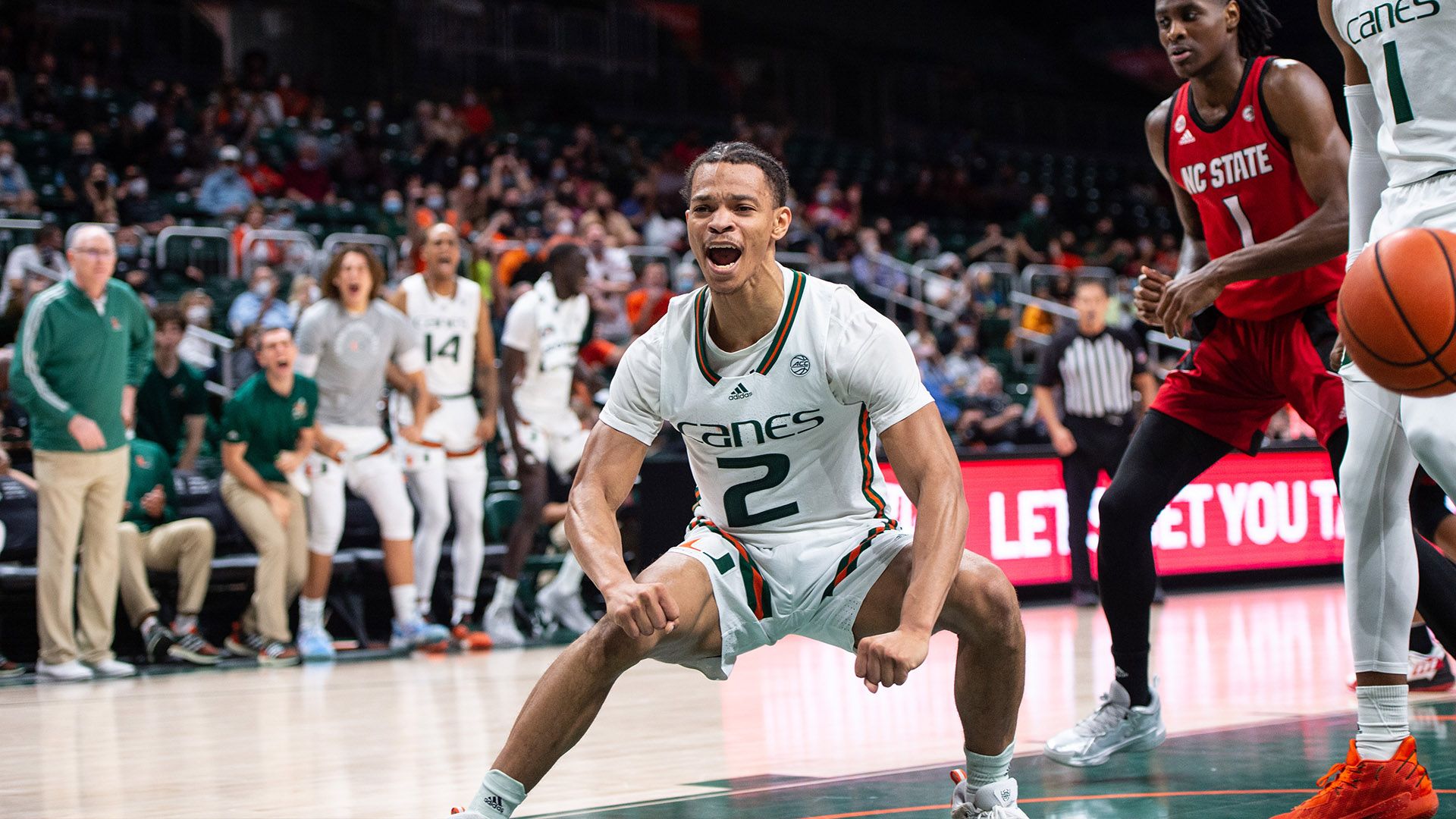 CORAL GABLES, Fla. – Facing an eight-point deficit with 11 minutes to play, the University of Miami men’s basketball team rallied back to defeat NC State, 91-83, Wednesday night at the Watsco Center.

Down two players, including a starter, due to COVID protocols, Miami (10-3, 2-0 ACC) still managed to tally its sixth consecutive win and tally a season-best point total. Fourth-year junior guard Jordan Miller scored a season- and game-high 25 points for the Hurricanes in the thrilling victory.

“I was very impressed with NC State’s athletic ability—how fast they were, how high they jumped, how aggressive they were attacking the rim and getting to the offensive boards. It was a real concern at halftime. We were actually playing too fast for ourselves,” Miami head coach Jim Larrañaga said. “In the second half, they were able to come out again and take control the first 10 minutes, but then we settled down. Isaiah Wong and Kam McGusty took control for us, offensively. Anthony Walker and Jordan Miller did a great job of screening and offensive rebounding and getting some interior baskets, which we didn’t get in the first half.

“[This was] a great team effort and an impressive game from start to finish,” Larrañaga continued. “It was such a terrific competition.”

The Hurricanes made five consecutive field goals early in the first half, including notching an 8-0 run that featured back-to-back 3-pointers and a dunk, to take a then-game-high eight-point lead, 25-17, with 9:58 on the clock. The Wolfpack, however, countered with six straight points of its own to quickly pull back within two.

Miami shot 7-of-13 from 3-point range in the first half and held NC State to just 39.5 percent (15-of-38) shooting overall, but the Wolfpack posted an 11-2 edge on the offensive glass and an 11-3 margin in second-chance points. Sixth-year redshirt senior guard Kameron McGusty scored 16 first-half points for Miami, the highest total before the break by any Hurricane this season.

After the Wolfpack extended its advantage back to five, Miami scored eight straight points, capped by back-to-back 3-pointers from third-year sophomore guard Isaiah Wong, to take its first lead of the second half, 76-73, with 4:39 remaining.

NC State made a pair of free throws at the other end to get within one, but Miami countered with 10 straight points in just 2:15 to go up by 11, 86-75, with 1:45 to play. The Wolfpack never got any closer than eight the rest of the way, as the Hurricanes controlled the closing minutes for the eight-point win.

Miller’s 25 points, which tied the third-highest total of his career and nearly doubled his prior season best of 13, came on 9-of-16 shooting, both marks season highs and the latter one shy of his career best.

The Middleburg, Va., native went 4-of-6 from deep and 3-of-5 from the line, with the four made 3-pointers his new top tally as a Hurricane. Miller also notched five rebounds and two blocks in 37 minutes of action, the latter also a season high in his first year at The U.

“He’s been getting more confident and more comfortable just playing with the guys. The better he plays, the better we are,” Larrañaga said. “Basketball is pretty simple; you’ve got to put the ball in the basket, you’ve got to keep the other team from putting it in the basket. Jordan is doing both.”

McGusty finished with 20 points and a co-game-high 11 rebounds, the latter figure one below his career best and his new top mark in ACC play. He shot 6-of-11 from the field, 2-of-3 on 3-pointers and 6-of-7 at the stripe, adding a season-best five assists.

“At one of the timeouts midway through the second half, I reminded Isaiah of how well he played at NC State, against these guys, last year,” Larrañaga said. “I told him, ‘This is your time. You know how good you are. I know how good you are. You need to have the ball in your hands and take charge.’ And that’s what he did, he and Kam.”

Third-year sophomore forward Anthony Walker also scored in double figures. Coming off the bench, he posted 11 points, all in the second half, and went 4-of-4 from the floor, while grabbing a season-high-tying four boards.

Freshman guard Terquavion Smith also totaled 14 points for the Wolfpack, while redshirt senior guard Thomas Allen logged 13 on 6-of-10 shooting to go along with seven boards.

Miami finished the night with a season-best 55.4 percent clip (31-of-56) from the field, while its 31 makes matched its second-highest total. In the second half alone, the Hurricanes shot 64.3 percent (18-of-28), their best mark in any frame all year.

Additionally, Miami shot a season-best 52.6 percent (10-of-19) from long range, with the 10 makes matching its third-highest mark of the year.

The Hurricanes resume play on the first day of 2022, as they host Wake Forest Saturday at 6 p.m., live on ESPNU.

MIAMI HURRICANES POSTGAME NOTES
– The Hurricanes moved to 13-15 all-time against NC State, including 6-6 at home and 9-8 in Larrañaga’s tenure.
– Larrañaga, who entered the game with the ninth-most victories of any active Division I coach, is now 680-467 in 38 years as a head coach, including 210-133 in 11 seasons at Miami.
– With 210 wins as an ACC head coach, Larrañaga passed Jim Valvano on the all-time leaderboard, moving into a tie with Brad Brownell for the No. 15 spot.
– The victory gave Larrañaga 104 wins in ACC action (regular season and tournament), tying Everett Case for No. 15 all-time.
– For the first time, Miami used a starting lineup of McGusty, J. Miller, Wong, fifth-year redshirt junior forward Deng Gak and sixth-year redshirt senior guard Charlie Moore.
– As announced prior to the game, sixth-year redshirt senior forward Sam Waardenburg and freshman guard Wooga Poplar were both unavailable due to COVID protocols.
– As announced Tuesday, third-year sophomore guard Harlond Beverly is out for the season, as he will have back surgery to address a lingering injury.
– Sixth-year redshirt senior center Rodney Miller Jr., returned to the court for the first time since injuring his left groin 12/8/21 versus Lipscomb.
– With 10 wins in 13 games, Miami has already matched its total from an injury-riddled 2020-21 campaign in which it played 27 games.
– The Hurricanes are riding a six-game winning streak for the first time since 11/10/17 to 12/22/17 when they started the 2017-18 season with a 10-0 record.
– Miami went undefeated in December for the second time in three years and moved to 50-15 in the month under Larrañaga, the .769 winning percentage its best in any month during his tenure.
– The last time the Hurricanes scored 90-plus points was on 2/19/20, when it tallied 102 in a triple-overtime win at Virginia Tech, while it last scored 90-plus in regulation on 12/21/19 when it notched 91 versus Coppin State.
– Miami last scored 90-plus points in regulation against an ACC team on 2/27/18 when it recorded 91 in a victory at ninth-ranked North Carolina.
– In Larrañaga’s 11 years, Miami is now 17-1 when tallying at least 90 points, including 6-1 in ACC competition.
– The Hurricanes improved to 4-3 on the season when trailing at the half, including winning their third such game in a row.
– With 51 points after the break, Miami scored 50-plus in a half for the first time since 11/13/21 when it notched 54 in the second session against UCF.
– The only time this season Miami made more than 31 field goals was 12/8/21 versus Lipscomb, while it also recorded 31 on 11/21/21 against Florida A&M.
– The Hurricanes’ prior season high in field goal percentage was 54.2, posted 11/26/21 against North Texas in Kissimmee, Fla.
– Miami’s previous top 3-point percentage this season was a 48.9 clip (14-of-29) in its last game, 12/20/21 versus Stetson.
– The lone other time Miami shot 60 percent in a half this season was in its other ACC game, as it logged exactly a clip of exactly 60 (15-of-25) in the second frame against Clemson on 12/4/21.
– McGusty’s 16 first-half points trailed only Wong’s 18 in the second half against UCF (11/13/21) and McGusty’s 17 in the second half versus Lipscomb (12/8/21) for the most in a session by a Hurricane in 2021-22.
– McGusty led all players in first-half points (16), rebounds (seven) and assists (season-high-tying four).
– Two Hurricanes scored 20-plus points for the first time since 11/8/21 versus Lipscomb when McGusty (29) and Wong (20) did so.
– Moore, who reached 300 rebounds as a collegian, recorded a season-high-tying three steals.
– Wong who surpassed 900 points, 250 free-throw attempts and 200 made free throws, scored double-figure points for the 45th time, including the 12th this year.
– Making his fourth collegiate start, Gak, who reached 100 points as a Hurricane, played a season-high 16 minutes, shattering his prior top mark of six.
– McGusty, who eclipsed 3,250 minutes played in his career, notched 20-plus points for the 19th time, including the 13th at Miami and sixth in 2021-22.
– McGusty also registered his 75th double-digit point total, including his 47th at Miami and 12th this season.
– Additionally, McGusty logged his sixth double-figure rebounding total and sixth double-double, all at Miami, including his fourth of each this season.
– McGusty also posted his fourth five-assist performance, all of which have come as a Hurricane, including his first of the season.
– J. Miller, who now has 999 collegiate points, tallied 20-plus points for the seventh time, including the first this year.
– In addition, J. Miller scored in double figures for the 53rd time, including the third in 2021-22.
– The 12 points J. Miller scored in the first half alone tied his second-most in a complete game this year.
– Walker scored in double digits for the 18th time, including the third this season.
– The 11 points for Walker marked his highest point total since the second game of the season when he logged 12 against UCF on 11/13/21.
– Walker moved past 400 points, 200 rebounds and 150 made field goals as a Hurricane, as well as reached 50 blocks.
– Freshman guard Bensley Joseph scored seven points, one shy of the best mark in his young career, in a career-high-tying 19 minutes of action.