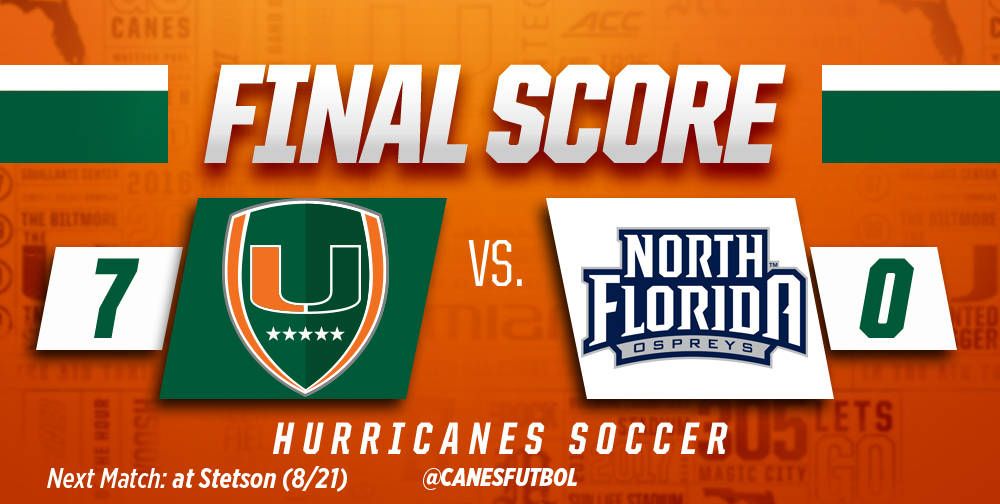 JACKSONVILLE, Fla. – On an historic night at Hodges Stadium, the University of Miami soccer team opened the 2016 regular season with an impressive 7-0 road victory over North Florida.

Miami (1-0-0) set a program record with 41 shots, eclipsing its prior top total of 38, set at Stetson on Oct. 27, 2001. The Hurricanes dominated North Florida (0-1-0) from start to finish after lightning delayed the start of the match by 33 minutes, earning the fifth shutout in program history in which they scored at least seven goals.

Freshman forward Kristina Fisher, in her first regular season action as a Hurricane, logged two goals and an assist in the win. Junior forward Ronnie Johnson had a goal and an assist, as did redshirt senior defender Shannon McCarthy, with the goal being the first of three-time captain’s career.

“We told the team to play at a high standard and keep the ball. We wanted players to take opportunities, but we also wanted players to be smart,” Miami head coach Mary-Frances Monroe said. “We had a lot of players play tonight, we had a lot of freshmen on the field [and we had] a lot of great leadership from our seniors and juniors. It just, overall, was a fantastic game for us.”

About 11 minutes after hitting the woodwork on Miami’s first shot of the season, Fisher gave Miami the early lead with a goal in the 13th minute. The Jupiter, Fla., native recorded the first official point of her career when she buried a rebound off a shot by Johnson, who was credited with an assist.

Just over a minute later, Johnson notched a goal of her own. From distance, she sent the ball past North Florida redshirt junior Susie Ford for an unassisted tally in the 14th minute.

Fisher scored her second goal of the match off a tremendous pass into the box by senior midfielder/defender Gianna Dal Pozzo. She received the ball and sent it into the back of the net to make it 3-0 Hurricanes in the 22nd minute.

Fisher became the fifth player in program history, and the first since 2008, to score multiple goals in a season opener. She is just the second freshman to do, joining Lindsey Yach, who did so in 2002. Fisher and Britney Butcher (2008) are the lone Hurricanes with five-plus points in a season-opening match.

“Kristina has been working really hard since this past spring,” Monroe said. “We’ve worked on the tactical side of the game with her. It just showed tonight that she can play at this level and she can execute being a game-changer for us.”

Senior forward Gracie Lachowecki, a 2015 Second Team All-ACC honoree, recorded her first goal of the year in the 34th minute on a ferocious strike near the top of the box. The goal was the 14th of her career, moving her into eighth on Miami’s all-time list, and freshman forward Bayleigh Chaviers earned her first-career assist with a nice cross on the play.

Miami finished the first half with a 31-2 edge in shots and a 15-2 lead in shots on goal. The 31 shots for the Hurricanes set a program record for a half, eclipsing the prior mark of 22, done most recently in the second half last year against NC State on Oct. 11, 2015. It also smashed the prior first half high of 17, which came at Nova Southeastern in Miami’s inaugural season on Oct. 23, 1998.

“We talked about, tactically, if their back line stepped or dropped on what to do, and I was really proud that they executed our plan,” Monroe said of the first half success. “When they had time to take an opportunity in front of the back line, they did, and we also got around them and tried to get services into the box.”

McCarthy opened the second half scoring in the 53rd minute after Fisher made a superb cross into the box off a free kick from the left side of the net.

“I’m really excited for Shannon to get a goal tonight,” Monroe said. “She’s been working really hard on making runs in the box and trying to get them on frame, and she just was in the right place and did a really good job of keeping it on frame.”

Freshman midfielder Lauren Markwith notched her first-career goal in the 77th minute, heading in an outstanding cross from redshirt sophomore Danielle Savage, who earned the first point of her career. Redshirt freshman defender Camie Kelton was also credited with an assist, giving her the first point of her career in her first regular season contest.

With just 27 seconds remaining, junior forward/midfielder Grace Rapp netted Miami’s seventh goal. McCarthy sent a free kick from near midfield into the box and Rapp put it out of senior goalkeeper Victoria Ekeli’s reach for the final goal of the match.

Redshirt sophomore Phallon Tullis-Joyce played the first 63 minutes in goal for Miami, making a pair of saves, before being replaced by redshirt junior Catalina Perez, who returned just four days ago from representing Brazil at the Olympic Games.

Between four spring scrimmages, two exhibition matches and tonight’s victory, Miami has outscored its opponents by 31 goals, 32-1, over seven contests in 2016. This marked the first time since 2013 the Hurricanes have won their regular season opener or their first road contest.

Miami, which had a 41-2 edge in shots and a 21-2 advantage in shots on goal, returns to the field Sunday at 1 p.m., when it takes on Stetson in DeLand, Fla., in the second leg of a two-match road trip.