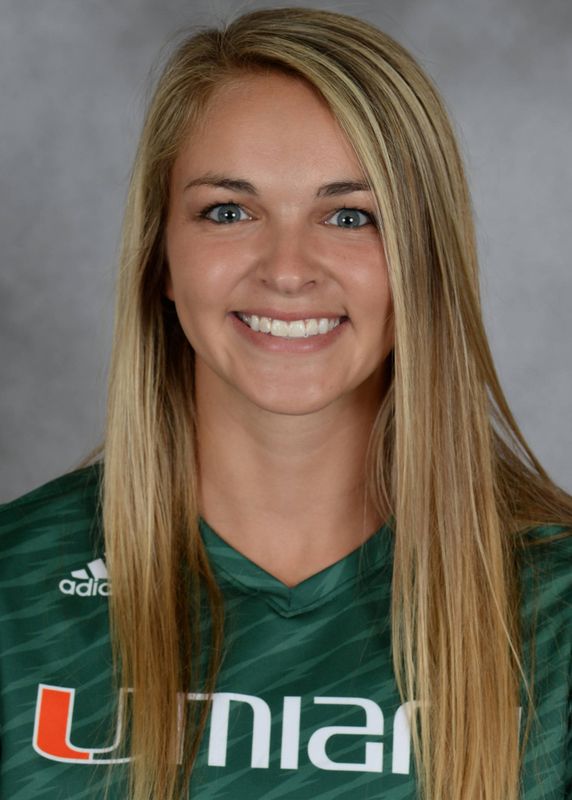 2016 (Senior): First Team All-ACC … All-ACC Academic Team … NSCAA Second Team All-Southeast Region … NSCAA Scholar All-South Region Second Team … NSCAA College Player of the Week (10/25) … Two-Time ACC Offensive Player of the Week (9/27, 10/25) … Top Drawer Soccer Team of the Week Honorable Mention (9/28)
Ranked No. 77 in Top Drawer Soccer’s Preseason National Top 100 and No. 15 in its Preseason ACC Top 20 … Finished the season at No. 44 and No. 12, respectively … One of eight Miami players to start all 19 matches … Led the team in goals (11), points (25), shot attempts (68) and shots on goal (37) … Also finished tied for sixth in assists (three) and tied for third in game-winning goals (two) … Tied for the fourth-most goals, logged the fifth-most shots and tied for the sixth-most points in a season in program history … Ranked third in the ACC in points per game (1.32), third in goals per game (0.58), fourth in goals, fourth in shots per game (3.58), fifth in shots and fifth in points … Tied for No. 44 nationally in goals per game, tied for No. 45 in goals, tied for No. 68 in points per game and tied for No. 83 in points … Tallied 1,487 minutes of action, sixth-most among Hurricanes … Played 90-plus minutes six times, including going the distance three times and eclipsing 100 minutes twice … Played over 80 minutes on 10 occasions, including in each of the season’s final seven outings … Finished her career third all-time at Miami in goals (24), fourth in points (54), tied for sixth in game-winning goals (five) and seventh in shots (124) … Scored a goal and led all players in both shots (10) and shots on goal (five) in the first match of the year at North Florida (8/19) … Recorded a goal and an assist at Stetson (8/21), also tying for the match lead in shots (six) and shots on goal (three) … Scored a pair of goals in the win over Jacksonville (8/28) and finished with six shots, including four on goal … Attempted five shots, with one on goal, against Miami (OH) (9/2) … Scored the lone goal of the match versus Florida Atlantic (9/4) and also logged a match-high three shots on goal … Recorded a match-high four shot attempts, including one on goal, against FIU (9/11) … Logged two shot attempts, with one on goal, at third-ranked Florida State (9/18) … Scored the opening goal in Miami’s victory against second-ranked Virginia (9/22) and finished with team highs in shots (four) and shots on goal (two) while playing all 90 minutes … Became the sixth Hurricane to score 20-career goals with her tally against Syracuse (9/25), logging three shots, including two on goal … Scored a goal in the victory over Wake Forest (10/2) while co-leading the team with three shot attempts and pacing Miami with two shots on goal … Scored a goal for the fourth straight match with the opening tally at No. 15 North Carolina (10/6) and played all 90 minutes … Led all players in shots (five) and shots on goal (four) while playing 103 minutes at Pittsburgh (10/9) … Posted the first multi-assist outing of her career with two assists against Louisville (10/20), while also tying for the match lead with three shots on goal … Against No. 25 Virginia Tech (10/23), logged eight shot attempts, four shots on goal, scored an equalizing goal in the 85th minute and tallied a golden goal in the 102nd minute to help the Hurricanes clinch a berth in the ACC Championship … With her first goal versus the Hokies, moved into sole possession of third place on Miami’s all-time goals list and also became the first player in program history with multiple double-digit goal seasons … Recorded a team-best three shot attempts in 104 minutes of action in the ACC Championship quarterfinals at No. 14 Clemson (10/30) and made her penalty kick in the shootout.

2014 (Sophomore): Saw action in 17 of 18 games, including 15 starts … Served as one of Miami’s most reliable defenders … Had one assist and two shots … Helped lead team to back-to-back shutouts against Jacksonville (9/2) and Stetson (9/5) … Credited with first assist of season in win over NC State (10/23) … Had both shots against Wolfpack … Delivered 90-plus minute performances in eight matches.

2013 (Freshman): Impressed in first season, seeing action in all 18 games and starting final 14 … Scored career-first goal in 6-1 win over Cleveland State (9/6) … Credited with assist in team’s win 2-1 over Florida Atlantic (9/8) … Registered 15 shots, including five on target … Made switch to defense in midseason and delivered seven consecutive 90-minute performances from Sept. 19 to Oct. 17 … Ranked second among freshmen with 1,159 minutes.

Personal: Last name is pronounced Lack-Uh-WECK-Ee … Parents are A.J. and Kay … Brother, Max, played soccer for Notre Dame and was picked in the second round of the 2016 MLS Superdraft by Real Salt Lake … Majoring in nursing.