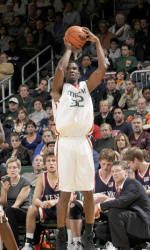 CORAL GABLES, Fla. – Jack McClinton scored a game-high 17 points and Brian Asbury added 13 points as the No. 16/17 University of Miami men’s basketball team closed its exhibition season with a 76-43 win over Barry University at the BankUnited Center on Saturday evening.

The Hurricanes converted 46.4 percent of their field goals – including 47.6 percent of their three-pointers, while keeping the Buccaneers to just 27.8 percent from the field. In addition, Miami dominated the boards, out-rebounding Barry 49-26, and used a 35-12 advantage in bench points in a win that saw the Hurricanes lead by as many as 39 points.

Miami converted 14 three-pointers from the new arc, almost three times as many as the Hurricanes managed in their first exhibition game one week ago. Asbury shot 3-of-4 from long range and McClinton made three of his five three-point attempts. James Dews connected on 2-of-3 from beyond the arc and Adrian Thomas added another pair to the Hurricanes’ long-distance barrage.

Cyrus McGowan got Miami off to a strong start, scoring the first three points on a field goal and free throw as the Hurricanes took the early lead. A 15-2 UM run, including back-to-back treys from McClinton and Dews, extended Miami’s lead to 18, up 26-8 with 7:21 remaining in the first half. The Hurricanes kept the Buccaneers in single digits for almost 15 minutes, until a three-pointer by Chad Bishop moved Barry to 26-11. Eight-straight Barry points got the Bucs within 10 with1:26 to go in the first half and Miami would take the 33-22 advantage into the break.

The Hurricanes came out fast in the second half, outscoring the Buccaneers 22-7 – including a pair of threes from McClinton and Asbury, to take the commanding 55-29 lead with 12:03 remaining in the game. Miami extended its lead throughout the half and went on to take the 76-43 win, closing the preseason 2-0.

McClinton, Asbury and Jimmy Graham pulled down a game-high six rebounds apiece, while Eddie Rios dished out a game-high seven assists in the win. McClinton grabbed a game-high three steals in 25 minutes and converted both of his free throw attempts. McGowan finished with nine points for Miami on 4-of-5 shooting and was among five Hurricanes to record a block – including a game-high two by Asbury. Dews finished with eight points on 3-of-5 shooting, while Julian Gamble added seven points, including hitting 5-of-6 attempts from the charity stripe.

The No. 16/17 University of Miami men’s basketball team opens the regular season at home on Sat., Nov. 15, versus Florida Southern at 7:30 p.m. Tickets start as low as $10 and can be purchased through the Hurricane Ticket Office at 1-800-GO-CANES.