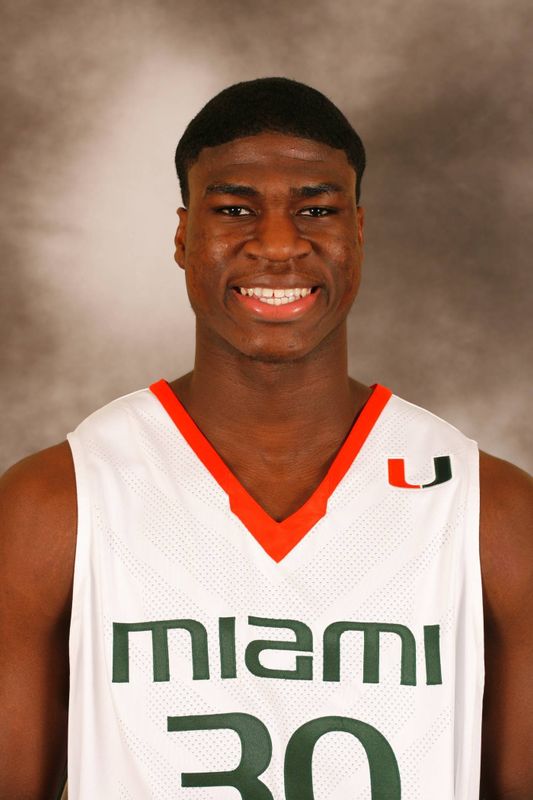 Getting to Know Adrian Thomas

As a Graduate (2010-11)
Appeared in a school-record 132 games over six years as a Hurricane… Named to the 2011 ACC All-Academic Basketball Team for the second time in his career…Played in all 36 games, making 11 starts – including nine straight to close his collegiate career… Averaged 9.1 points, 3.7 rebounds and 2.6 three-pointers per game – second-best in the ACC behind teammate Malcolm Grant and 55th in the nation… Also ranked eighth in the ACC and 40th in the nation, shooting 38.9 percent from long range – second-best on the squad behind Grant… Hit a three in 20 straight (1/8-3/21) for the second-longest active streak in the ACC, tying for sixth in UM history… Made a three-pointer in 28 of his last 30 games and in 78 of his last 87 games… 93 of 105 field goals made this season were from beyond the arc (.886)… His 204 career threes ranked third most among active ACC players in 2001 and fifth all-time in the UM recordbook, while his 93 threes in 2011 are fourth in Miami single-season history… Set a program record with 239 three-point field goal attempts this season, while his 522 career attempts rank fifth at UM… His 39.1 percent career three-point shooting ranks fifth in program history… Scored in double figures 16 times, including a five-game streak in non-conference play (11/27-12/18)… Also scored 10-plus points in eight of his last 14 games, beginning with career-highs of 20 points and 10 rebounds for his lone career double-double in the overtime win over Virginia (2/5)… Shot 50 percent or better from long range 10 times, including a season-high 66.7 percent twice – going 4-of-6 at Georgia Tech (3/6) and 2-for-3 versus Pepperdine (12/30)… Knocked down three or more shots from behind the arc 18 times this season and 35 times in his career — including a career-high six three-pointers twice this season – in wins at UNC Greensboro (2/15) and against Virginia (2/5)… Fueled Miami’s second-half comeback in the NIT second round vs. Missouri State (3/21), pouring in four three-pointers and a long two in under four minutes en route to 16 points, three boards and two assists… Poured in three threes in the NIT-opening win over FAU (3/16)… Knocked down four three-pointers in the second half of the ACC Tourney quarterfinal versus No. 6/7 North Carolina (3/11), finishing with 12 points, four boards and two steals… Posted a team-high 14 points (4-6 3s) and three rebounds at Georgia Tech (3/6)… In his Senior Night win over Maryland (3/2), knocked down three 3s and went 3-of-4 from the line en route to 12 points, four rebounds, two assists and a block in 37 minutes — just one minute shy of his career high…Knocked down a pair of threes and grabbed five boards at Florida State (2/26)… Registered seven points, with two three-pointers and a game-high tying six rebounds in the win at Boston College (2/23)… Poured in 13 points versus Clemson (2/20), including 4-of-8 shooting from beyond the arc… Game-high 18 points on a career-high tying six treys at UNC Greensboro (2/15) — hitting 6-of-10 attempts from long range… Notched second-straight double-figure scoring game with 10 points and three boards in the road win at Wake Forest (2/9)… His three-point shooting helped Miami overcome a slow start in the win over Virginia (2/5), with his three threes during the second half tying the game on each occasion… Nailed his career-best sixth trey just 42 seconds into the overtime period to put Miami on top for good, and with Miami up by two with just two seconds remaining in overtime, he converted a pair of free throws to put the Canes up by four to seal the win… Hit three three-pointers en route to nine points against Georgia Tech (2/3)… Hit four three-pointers and finished with 12 points, five rebounds and an assist in 30 minutes versus North Carolina (1/26)… Went 3-for-7 from beyond the arc in the win over Boston College (1/15) en route to 13 points, four rebounds and a pair of steals… Went 4-of-5 from long range in the first half versus UCF (12/18) to pass assistant coach Jake Morton for ninth place in UM history with 138 career three-pointers, finishing with 12 points and five boards… Finished with 13 points — including consecutive three-pointers to trigger Miami’s rally in the win over West Virginia (12/4)… Scored a career-high 17 points, including hitting 5-of-8 three-pointers, to help lead the Hurricanes past Ole Miss (11/30)… Posted 12 points at Florida Gulf Coast (11/27), going a perfect 4-for-4 from the line and sinking a pair of treys… Finished with seven rebounds, eight points, a pair of assists and a steal at Rutgers (11/21)… Went 3-of-7 from long range to finish with nine points versus North Carolina Central (11/19)… Went 4-of-9 from beyond the arc en route to 12 points in the season-opening win over Jacksonville (11/12).

As a Senior (2009-10)
Among five Hurricanes to play in all 33 games, averaging 7.3 points and 2.7 rebounds an outing… Led the ACC in three-point field goal percentage (.421) and ranked fifth in three-pointers made per game (2.1), sinking at least one trey in 47 of his last 52 games — including in 11-straight contests for the longest active streak in the ACC heading into 2010-11… Had hit a trey in 15 straight (11/28-1/31) for the then-longest active streak in the ACC and the ninth-longest streak in UM history… 18 games with three-plus treys… Of his 154 career field goals at this time, 72.1 percent came from beyond the arc — including 84.8 percent of his shots as a senior… Hit a team- and personal-season high 67 three-pointers…Over the last 10 games, converted 44.4 percent from the field and 44.9 percent from beyond the arc… Dished out 46 assists — topping his total from the previous four seasons combined… Posted seven double-figure scoring games, including a season- and game-high tying 16 points on 6-of-9 shooting from the field and 4-of-7 shooting from long range in the season-opening win over North Carolina Central (11/14)… Also converted 4-of-7 from long range in the victory over then- No. 20/20 Georgia Tech (2/10) en route to 12 points… Finished with nine points on 3-of-6 three-point shooting, with five boards and a steal in the ACC Tournament win over Wake Forest (3/11)… Handed out three assists and went 2-for-4 from beyond the arc en route to 10 points versus Florida State (3/6)… Grabbed a season- and team single-game season-high tying four steals at North Carolina (3/2)… Converted a career-high 5-of-5 free throws at Maryland (1/26)… Contributed nine points on 3-of-6 shooting from long range — his third-straight outing with three-plus treys, three boards and an assist in the win over Wake Forest (1/9)… Sparked and finished Miami’s 15-4 run versus the Demon Deacons, erasing a five-point deficit to give UM a 60-54 advantage with 8:22 remaining… Scored 15 points on a season-high 5-of-6 effort from long range — matching the league’s top single-game three-point performance of the year — adding five boards, three assists and a career-high tying two blocks at Pepperdine (1/3)… In his first start of the season and the third of his career, scored 11 points on 4-of-6 shooting from the field — including 3-of-4 from long range, with two boards and two assists versus South Carolina State (12/12)… Hit three three-pointers with three boards, two assists and two steals to defeat South Carolina (11/22) in the championship game of the Charleston Classic… Finished with 12 points on 3-of-5 three-point shooting with three free throws and a season-high six rebounds in the first-round win over Tulane (11/19) in the Charleston Classic.

As a Redshirt Junior (2008-09)
The 2009 recipient of the “Bob Bradley Spirit & Courage Award,” presented by the Atlantic Coast Sports Media Association (ACSMA) to a male or female basketball player, coach or team administrator who has overcome significant injury, illness or adversity in life to become a valuable contributor to his/her program and university… Also named Most Improved Player by a vote of teammates and received the Outstanding Student-Athlete Award at the team’s postseason banquet… Played in all 32 contests, averaging 5.1 points and 2.3 rebounds per game, while converting 1.3 three-pointers an outing at a 35.7 percent clip… Hit at least one trey in 14-straight contests, including a then- career-high tying four in the win over then- No. 6/7 Wake Forest (2/4) and at NC State (1/27), to tie for the 10th-longest three-point streak in Miami history… Was the third-longest active streak in the ACC until it was snapped at Georgia Tech (3/4)… Scored in double figures five times — all in ACC play, averaging 6.8 points per game versus conference opponents…Scored a then- career-high 14 points in a route of then- No. 6/7 Wake Forest (2/4) and at NC State (1/27)… Hit a then- career-high tying five field goals, including four three-pointers, in a season-high 29 minutes versus the Wolfpack… Finished with 10 points on 57.1 percent shooting — including a pair of three-pointers — at then- No. 5/6 North Carolina (1/17)… Posted his second-straight double-figure scoring effort with 10 points — including two treys, a career-high five steals, four rebounds and a career-high two blocks in a win over Florida State (1/21)… Contributed 11 points on 4-of-6 shooting, including three three-pointers, three boards, an assist and a steal at Boston College (1/10)… Shot 40.1 percent from the field for the season, including converting 50.0 percent or better in 13 games… Hit 83.3 percent of his shots in the win over the Demon Deacons, converting 5-of-6 field goals and 4-of-5 three-pointers… Grabbed three steals in the NIT second-round game at Florida (3/20)… Went 3-of-6 from beyond the arc to finish with nine points versus Virginia Tech (3/12) in the opening round of the ACC Tournament… Picked up nine points on three shots from beyond the arc (3-of-7) while securing two rebounds, a steal and two assists in a road win at Virginia (2/26)… Scored six points on two big three-pointers late in the game during a comeback stretch against then- No. 3/3 North Carolina (2/15), while adding four boards and a career-high four assists… Logged a season-best eight rebounds in a win over North Carolina Central (1/3).

As a Redshirt Sophomore (2007-08)
Scored a season-high 13 points off the bench in the season-opening win over Florida Southern (11/9), converting 5-of-7 from the field (.714) and 3-of-5 from long range (.600)… Also grabbed four rebounds in the win… Recorded five points and a pair of steals versus Marist (11/15)… Saw action in the first four games before sustaining a season-ending ACL injury in practice… Averaged 4.5 points and 2.3 rebounds in 13.3 minutes per game.

As a Sophomore (2006-07)
Appeared in four games before suffering a season-ending abdominal injury… Averaged 0.5 points, 0.3 rebounds and 4.8 minutes per game… Scored a season-high two points in the season-opener against FIU (11/11)… Added a rebound versus Buffalo (11/18).

As a Freshman (2005-06)
Played in 23 games, averaging 1.1 points and 0.8 rebounds in 5.0 minutes per outing… Named to the 2006 ACC All-Academic Basketball Team… Finished with five points and two rebounds in seven minutes against Boston College (2/16)… Scored three points and pulled down a board in six minutes versus Clemson (1/18)… Grabbed four rebounds in four minutes against Wofford (12/10)… Recorded season-highs in points (4) and minutes played (12) versus Morgan State (11/19)… Made collegiate debut against Texas-Arlington (11/13), scoring one point.

High School
Averaged 24.2 points, 14.9 rebounds and 2.3 blocks per game as a senior at Flanagan High School, en route to being named the Sun-Sentinel’s 6A-5A-4A Player of the Year for a second consecutive season… Ranked 47th in the nation by Basketball News… Earned Street & Smith’s honorable-mention All-America honors… Led team to the regional finals and a district championship while securing a 25-4 record in 2004-05… 2005 Broward County Athletic Association’s Scholar-Athlete of the Year… Scored a career-high 32 points against Pompano Blanche Ely as a senior… Averaged 24 points and 13.1 rebounds per game, winning the Sun-Sentinel’s 5-A Player of the Year award as a junior… That year, led team to a 27-2 record, including a district championship and a 3-6A regional runner-up finish… Named first team all-county by both the Miami Herald and Sun-Sentinel as a sophomore… Started at center as a freshman, averaging 20.1 points and 10.3 rebounds an outing… Coached by Greg Samuel.

Personal
From a family of educators, graduated in May 2009 with a bachelor’s degree in business management and organization, and is on track to earn his master’s degree in sports administration in May 2011… Nickname is “A.T.”… Shooting threat as a four with a strong perimeter shot which led the ACC in three-point field goal percentage in 2010… Developed into a strong shooter when his injuries decreased his mobility and had him sitting in a chair and shooting in the gym… Great defender both in the post and on the perimeter… Playing time and productivity steadily increased over his career… Graduated in the top 10 percent of his class at Flanagan.