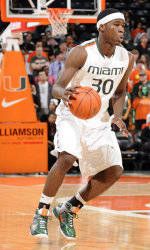 Getting to Know Adrian Thomas

Entering his sixth season as a Hurricane on Frank Haith’s men’s basketball squad, fans are pretty familiar with the accomplishments of Adrian Thomas on the court. The perimeter force led the ACC in three-point field goal percentage one year ago and is the clear veteran on a talented squad in 2010-11. Let’s get to know a little about “A.T.” off the court.

GETTING TO KNOW U — Adrian Thomas

Nickname: A.T.
Favorite Basketball Player: Kobe Bryant
Favorite Athlete in Another Sport: Donald Thomas (NFL)
Favorite Pro Sports Team: Los Angeles Lakers
Favorite Midnight Snack: Cereal
Favorite Song Right Now: Hard in the Paint (Remix) — Waka Flocka Flame/Tears of Joy — Rick Ross
Favorite Cartoon when I was growing up: Duck Tales/Magic School Bus
I’m a Hurricane because I like the school and it’s home
At the U, I’ve learned so much from Coach Haith
One thing that everyone should know about Miami basketball is we are a good team that works hard
If I was playing 2-on-2, I would choose Durand Scott for my team
If I could play any other sport at UM, it would be football
The funniest nickname on the team is Big Reg (Reggie Johnson)
The best player I’ve matched up against is Jerome Dyson (UConn)
Other than basketball, I am talented at dancing and singing
The actor I would want to play me in a movie is Terry Crews
If I were a superhero, my name would be Invincible Man and my superpower would be being invincible
The song no one would believe I have on my iPod is Teenage Dream — Katy Perry
I hate to admit it, but I love liver and onions
No one can believe I watch Keeping Up With The Kardashians
If I could only eat one meal for the rest of my life, it would be liver and onions
The weirdest thing I’ve ever eaten is liver and onions
If I were an animal, I’d be a fish or shark
The farthest place from home I’ve been is Seattle, Washington
People might be surprised to know I dance all the time
Dream date: D. Woods
If I could spend a day with anyone, it would be Lebron James
Most embarrassing moment: Tripping in the cafeteria in middle school
The most influential people in my life are my mom and dad
My biggest pet peeve is when people talk too much or are too touchy
My worst habit is sleeping late
If you walked into my dorm room, the first thing you would notice is my MacBook
If I won the lottery, the first thing I would buy is a Rolls-Royce Phantom
One piece of advice for a new UM basketball player: Have fun
When I played basketball as a kid, I pretended to be Shaq
My first job was basketball counselor
When I was little, I wanted to be an NBA player
Now my dream job is to be a music producer