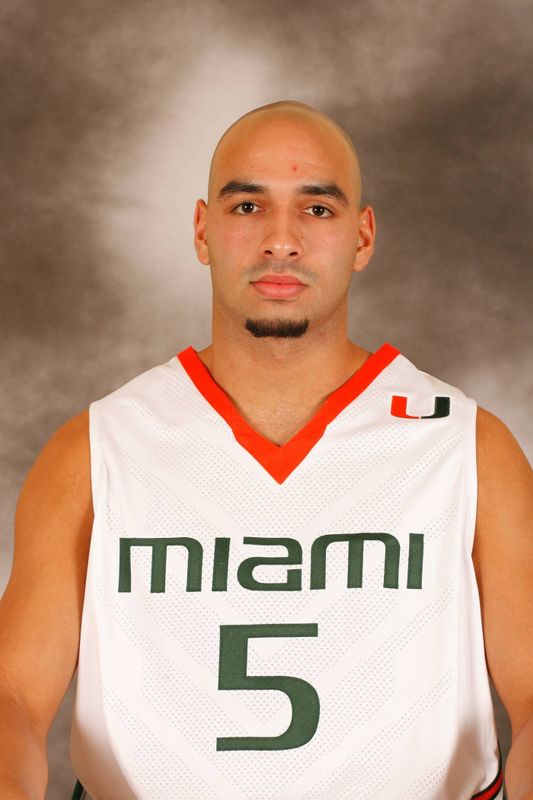 As a Freshman (2007-08)
Saw action in all 34 games, including three starts during non-conference play… Picked up more playing time as the team moved deeper into the ACC season, logging 14.4 minutes per game over the last 10 regular-season contests after averaging just 4.0 minutes per game in the first six league games… Tallied a personal ACC-high 25 minutes in win over Virginia (3/1), scoring eight points and tying a career high with eight assists… Also recorded eight assists — a Puerto Rico Tip-Off Tournament high — with no turnovers versus Marist (11/15) in just his second collegiate game… Posted a 1.47 assist-to-turnover ratio in ACC play, second-best on the squad… Pivotal in Miami’s win at Virginia Tech (2/9), scoring a career-high 14 points, including 3-of-5 from long range and 3-of-4 from the line… Also hit a career-high three treys versus Penn (1/2)… At Clemson (2/27), made a career-high five field goals on eight attempts to finish with 12 points, his second-highest point total on the season… Recorded six assists versus the Tigers, his second-highest total in league play and third-highest overall… Also scored in double figures with 11 points in both his collegiate debut versus Florida Southern (11/9) and against Alabama State (11/28), in which he converted a season-high 6-of-8 from the line… Also grabbed a season-high four steals and dished out five assists versus Florida Southern… Had four points, two assists and a steal at Duke (2/6) in 23 minutes of action… Recorded at least four assists on nine occasions… Dished out four assists and made a pair of steals in the win over Stetson (12/17)… Played a career-high 36 minutes vs. Morgan State… Pulled down a season-high four rebounds three times.

High School
Averaged 26.5 points, 8.9 rebounds and 5.7 assists per game in his final year at Miami Senior High School… Rated the 16th-best point guard in the 2007 class by Scout.com… Considered the 17th-best 2007 point guard prospect in the
nation and the sixth-best player in the state of Florida by Rivals.com… A four-year first team all-state selection… Paired with current UM teammate Dwayne Collins to capture the 2005 state championship… Averaged 20.0 points and 10.0 assists per game as a junior and 25.4 points an outing as a sophomore… Coached by Marcus Carreno.

Personal
Born Edwin Rios, but goes by “Eddie”… Undecided on major… Nicknames include “ER5” and “E-Class”… Knew he wanted to play at Miami when he saw former Hurricanes Marcus Barnes (2000-02) and John Salmons (1998-02) play at
UM… Wears number five because “many great point guards have worn the number.”