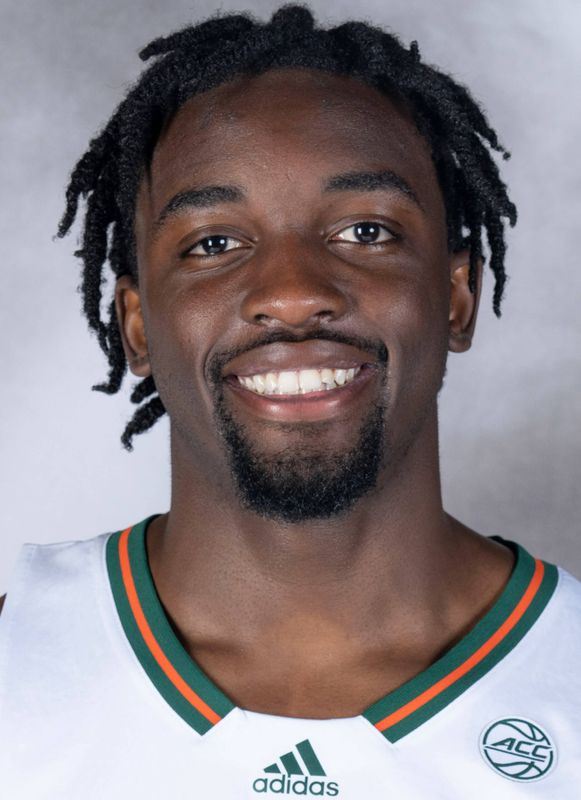 As a Freshman (2021-22): Appeared in the final 36 games of the season … Averaged 2.3 points and 1.6 rebounds per game while shooting 39.5 percent (18-of-39) from 3-point range and 83.3 percent (15-of-18) at the line … Made nine of his first 13 3-point attempts, including seven of his first nine … After not playing in the season opener, debuted with three points in 17 minutes against UCF (11/13) … Shot 4-of-4 on free throws, a season high in each area, at Florida Atlantic (11/16) in his first road action … Posted a season-best eight points on 3-of-4 shooting, including a 2-of-3 clip from deep, against Dayton (11/25) in Kissimmee, Fla. … Recorded seven points in 19 minutes versus NC State (12/29) … Scored six points on a pair of 3-pointers, the latter giving Miami the lead after trailing by 18, in the win over Syracuse (1/5) … Notched five points and two assists in 19 minutes in the victory against eventual NCAA runner-up North Carolina (1/18) … Finished with five points, five rebounds and two assists in 22 minutes at Georgia Tech (1/29), hitting his lone 3-pointer … Logged five points and two assists in 19 minutes versus Notre Dame (2/2) … Set season highs in rebounds (six), assists (four) and minutes (28) against Georgia Tech (2/9), his third multi-assist outing in a four-game stretch after posting just two prior … Scored six points and made both his 3-pointers at Pittsburgh (2/22) … Tied his season high with six boards in 20 minutes in a homecoming game at Boston College (3/2) … Appeared in all four NCAA Tournament games, including notching 15 minutes in the first-round win over No. 21/22 USC (3/18) and 17 in the Elite Eight game against the eventual national champion, third-ranked Kansas (3/27).

High School: Graduated from Putnam Science Academy (Conn.) … Consensus top-150 recruit, unanimously considered the best prospect in Connecticut … Considered a four-star recruit by ESPN, 247Sports and the 247Sports Composite … Ranked No. 80 overall and No. 14 among point guards by ESPN … Placed No. 126 in the 247 rankings, including No. 19 at his position … Tabbed as the No. 103 recruit, including No. 16 among point guards, by the 247Sports Composite … Also finished No. 148 in the Rivals rankings, good for No. 27 at his position … Missed his entire senior season with a left ankle injury sustained in a scrimmage … Attended Cushing Academy (Mass.) as a junior and served as the team captain … Averaged 15.4 points, 7.2 rebounds and 6.8 assists per game, en route to Class AA All-NEPSAC honors … Went to his hometown Arlington High School (Mass.) for two years … Played on the soccer team as a sophomore … The Detroit Pistons’ Hamidou Diallo also graduated from Putnam, while the Milwaukee Bucks’ Pat Connaughton also hails from Arlington, Mass.

Personal: Full name is Bensley Ralph Joseph … Goes by Benz … Born Feb. 18, 2002, in Miami … Lived in Miami for the first eight months of his life, before moving to Massachusetts … Mother is Rachel Lamonge, who is originally from Haiti … Does not have any siblings … Majoring in exploratory arts & sciences … Favorite athlete is Damian Lillard because he is a realist on and off the court, as well as a reliable late-game player … Best sports memory is hitting a buzzer-beating jump-shot against Canterbury School as a junior and getting mobbed by his teammates … Committed to Miami over Boston College, Georgetown, Marquette and Providence … Chose Miami because he felt the staff valued his game and showed the most interest.