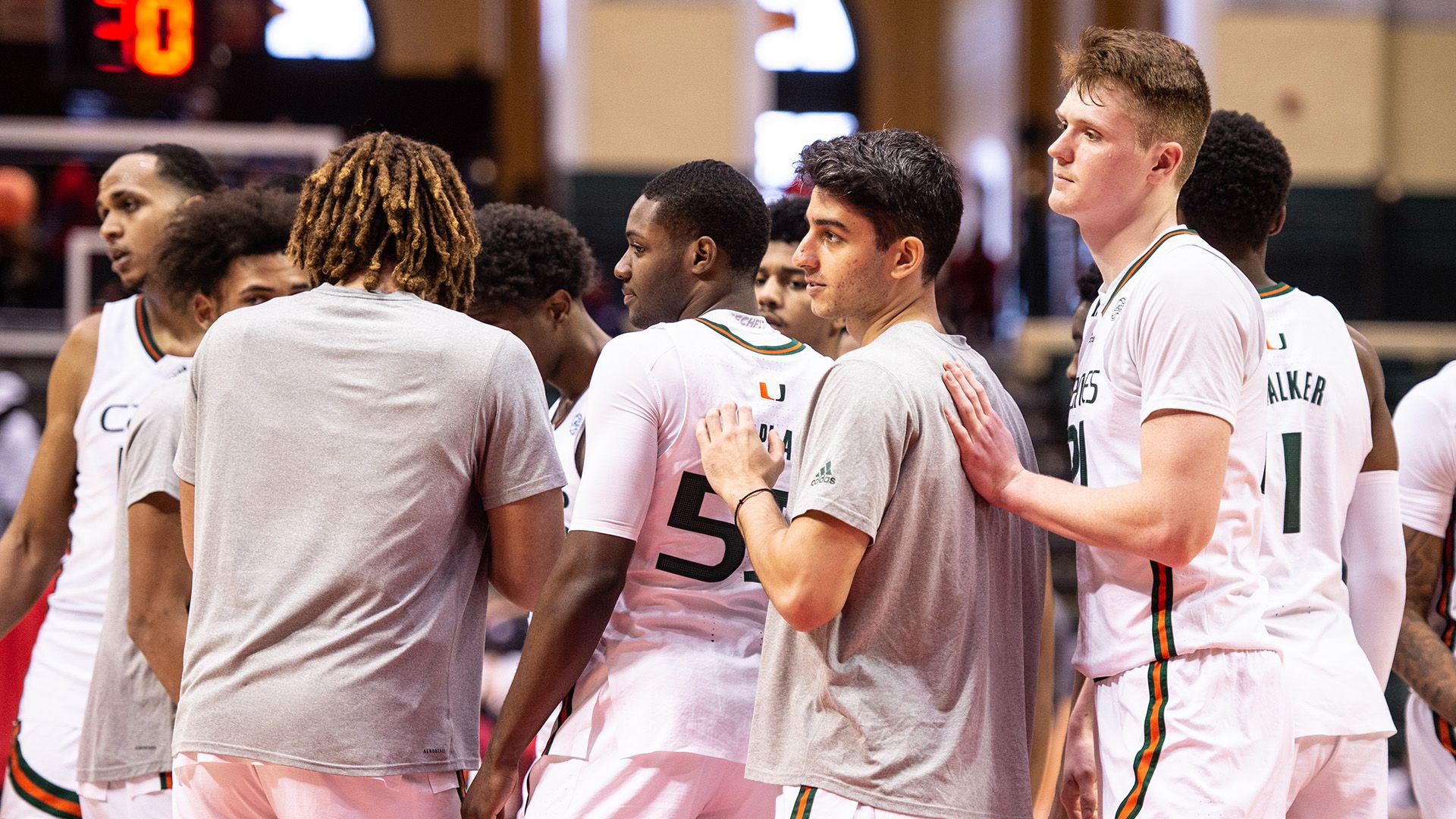 KISSIMMEE, Fla. – The University of Miami men’s basketball team dropped a 76-60 decision to Dayton Thursday afternoon in the first round of the ESPN Events Invitational.

The Flyers’ excellent shooting, particularly beyond the arc, proved too much for Miami (3-2) to handle at the HP Field House at the ESPN Wide World of Sports. Third-year sophomore guard Isaiah Wong paced the Hurricanes with 10 points in the Thanksgiving Day setback.

“Well, Dayton’s pressure defense to start the game really disrupted us. They got into our heads,” Miami head coach Jim Larrañaga said. “We became very disjointed and never were able to organize our offense or defense to the point where there was a chance for us to make a comeback and win the game.”

The Flyers continued their offensive surge, posting a stretch in which they went 8-of-10 from the floor, to go up by 13, 36-23, with 1:06 left before the break. The Hurricanes scored the final basket of the half and went into the intermission down by 11, 36-35.

Coming out of the locker room, Miami scored six straight points to pull within five, but Dayton countered with 10 in a row of its own. The burst included back-to-back 3-pointers by redshirt junior guard Elijah Weaver, helping the Flyers take a then-game-high 15-point edge, 46-31, with 15:24 remaining.

The Hurricanes never got any closer than 11 the rest of the way, as Dayton earned the victory in front of a bevy of its fans clad in red and white.

“We did do a good job in the second half of cutting the lead to six, but they immediately made an adjustment and made a couple of threes,” Larrañaga said. “That made all the difference.”

Wong finished the day as the Hurricanes’ lone double-digit scorer, marking the first time Miami had just one such player since March 4, 2020. Three other Hurricanes notched eight points, including freshman guards Bensley Joseph and Wooga Poplar.

Dayton’s 3-point percentage was the best by a Miami opponent since Jan. 27, 2019, while their field goal clip was the highest the Hurricanes have allowed since Jan. 4, 2020.

“Once you establish a really good inside game, then the threes start flowing effortlessly. That’s what happened,” Larrañaga said. “We weren’t able to stop them inside. That gave them a tremendous amount of confidence; they could start shooting threes and felt no pressure at all.”

The Hurricanes return to the court Friday at 11 a.m., when they take on the loser of the Kansas/North Texas game in their second of three contests at the HP Field House, live on ESPN2 or ESPNU.

MIAMI HURRICANES POSTGAME NOTES
– The Hurricanes moved to 1-8 all-time against Dayton, including 0-1 at neutral sites and 0-1 in Larrañaga’s tenure.
– Larrañaga, who entered the game with the ninth-most victories of any active Division I coach, is now 673-466 in 38 years as a head coach, including 203-132 in 11 seasons at Miami.
– For the third time in a row, Miami used a starting lineup of Wong, sixth-year redshirt senior guard Kameron McGusty, sixth-year redshirt senior center Rodney Miller Jr., sixth-year redshirt senior guard Charlie Moore and sixth-year redshirt senior forward Sam Waardenburg.
– The Hurricanes fell to 76-56 in multi-game events, including 53-30 since the program rebirth (1985-86), 15-10 under Larrañaga and 1-3 at the ESPN Wide World of Sports.
– The last time Miami lost its opening matchup of a multi-game event was 11/28/13, when it fell to George Washington, 71-63, in overtime in the Wooden Legacy in Anaheim, Calif.
– This marked just the 14th time in Larrañaga’s 11-year tenure Miami lost to a team with a sub-.500 record, including only the second time it has done so in non-conference play.
– Dayton’s 58.7 clip from the field was the best by a Miami opponent since second-ranked Duke shot 59.7 percent (40-of-67) on 1/4/20.
– The Flyers’ 57.9 percent mark from 3-point range was the top total by a Hurricane opponent since RV/No. 23 Florida State posted a 60.0 percent ledger (12-of-20) on 1/27/19.
– Dayton shot 65.0 percent (13-of-20) in the second half, the first time a Miami foe eclipsed 60 since Georgia Tech had a 63.3 percent mark (19-of-30) in the second session on 2/20/21.
– The last time Miami had just one double-digit scorer was 3/4/20 against No. 20 Virginia, when Chris Lykes tallied 16 points.
– Miami over doubled its number of tied scores (three to seven) and quadrupled its number of lead changes (one to four) this season.
– Thursday marked the first time in 2021-22 the Hurricanes played a game in which one team did not lead for 38-plus minutes.
– McGusty eclipsed 3,000 minutes played as a collegian.
– Wong registered double-figure points for the 37th time, including the fourth this season.
– Joseph, who had a career-high point total, made his first three shots of the day, including hitting consecutive 3-pointers in under 70 seconds.