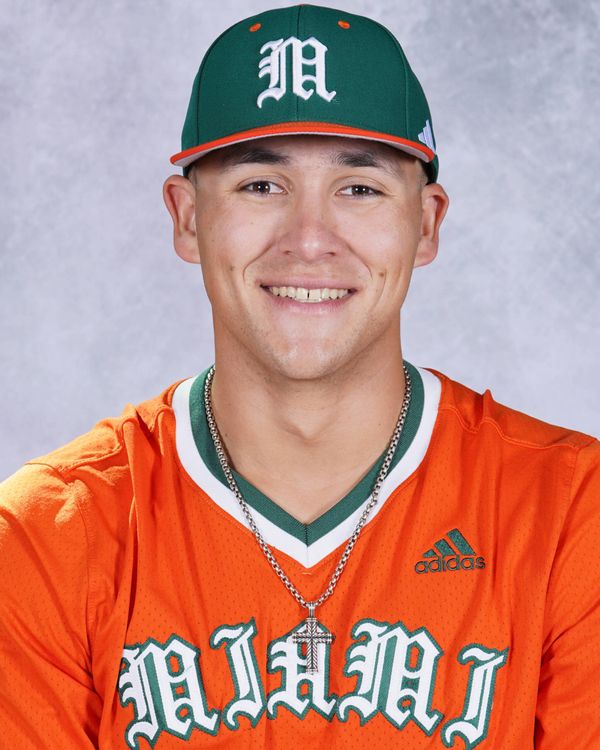 Redshirt Freshman (2022): Made 25 appearances as a right-handed pitcher for the Hurricanes…Went 3-0 with a 7.12 ERA across 24 innings…Totaled 38 strikeouts, while walking 11…Held opponents to a .213 batting average…Recorded multiple punchouts in 15 outings…Tossed a scoreless frame during the season-opening weekend against Towson (Feb. 19)…Pitched a shutdown inning in his ACC debut vs. Boston College (Mar. 12)…Struck out a co-season-high three in two innings against No. 13 North Carolina (Mar. 26)…Fanned three batters across two scoreless innings vs. Canisius (June 4) in the NCAA Coral Gables Regional Opener.

*True Freshman (2020 – FIU): Appeared in five games on the mound for the Panthers in the shortened 2020 college baseball season…Pitched 7.0 innings allowing zero runs…Opposing batters hit .087…Led all Panthers with two saves…Totaled 10 strikeouts, including four outings with multiple strikeouts…Made his debut against Fordham (Feb. 14), tossing a scoreless inning with one strikeout…Twirled two scoreless two-strikeout innings against George Mason (Feb. 23) and Penn (March 8)…Struck out the side in a scoreless inning of work against Bethune-Cookman (March 8).

High School: Three-year letterman at Belen Jesuit Prep…Two-time 7A-16 Pitcher of the Year…Three-time All-District selection…Garnered 2019 First Team All-Dade distinction after posting a 6-2 record with a career-best 1.41 ERA and 100 strikeouts in 59.2 innings…Went 16-7 with a 2.23 ERA and 240 strikeouts over 160 innings in his high school career.

Personal: Parents are Humberto Torres and Yadira Torres…Has an older brother, Humberto, and a younger sister, Natalia…Brother played baseball at FIU and currently plays at Gardner-Webb…Intends to major in economics.