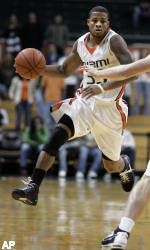 CORAL GABLES, Fla. (AP) — Brian Asbury scored  a career-high 22 points as Miami rebounded from its first loss of the season to defeat Penn, 88-62, in the non-conference finale for the Hurricanes on Wednesday night at the BankUnited Center.

Dwayne Collins added his second double-double of the season and the eighth of his career with a season-high 18 points and 12 rebounds to help the Hurricanes to their 13th win, surpassing their win total from last season.

Coming off a 76-70 loss Saturday against Winthrop, which broke a 12-game winning streak, the Hurricanes wore down the Quakers with an 11-0 run to start the second half. Collins, who added three steals and a pair of blocks in the game, scored the first seven of the spurt.

Jack McClinton’s 3-pointer with 7:30 left capped an 8-0 spurt and increased the Hurricanes’ advantage to 72-42.

Cameron Lewis scored 13 points to lead Penn, which fell to 4-9.

In the aftermath of a 60-30 loss at Florida Gulf Coast Saturday, in which they scored six first-half points, the Quakers stayed within striking distance during the first 20 minutes. Asbury and James Dews each hit 3-pointers as Miami built a 16-7 lead in the first 12:06.

Jimmy Graham’s slam dunk with 11:29 left in the first half increased the Hurricanes lead to 18-9. But Lewis scored three consecutive field goals in a 1:31 span as Penn reduced Miami’s lead to 18-15. The Hurricanes responded with a 7-0 run and built their first double-digit lead of the half.

Miami closed the first half outscoring Penn, 8-3, behind field goals from Raymond Hicks, Collins and Graham, in addition to McClinton’s two free throws.

McClinton finished with 12 points for his sixth-straight double-figure scoring effort, while Eddie Rios came off the bench and sank a career-high three 3-pointers in the win. Dews dished out a career- and game-high six assists, while Asbury tied his career high with four steals. For the game, Miami recorded a season-high tying 15 steals.

The Hurricanes return to action on Sat., Jan. 12, as they play host to Georgia Tech in their ACC opener at 2 p.m.