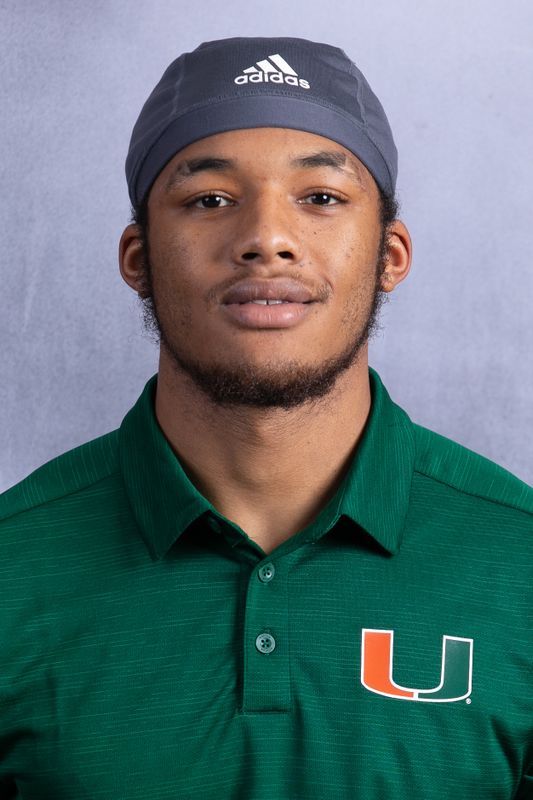 2020 (True Freshman): Saw action in nine games and made two starts in first collegiate season…Rushed for 209 yards and one touchdown, averaging 4.0 yards per carry on 52 attempts…Led all running backs with 135 receiving yards in regular season…Caught 11 passes and had one touchdown reception…Made career debut in season opener against UAB (Sept. 10), finishing with 59 rushing yards on just nine carries…Averaged 5.5 yards and had long run of 25 yards in victory over Blazers…Scored first two touchdowns of collegiate career in road win at top-20 Louisville (Sept. 19)…Scored on 3-yard rush in first quarter and added career-long 75-yard touchdown reception in win over Cardinals…Had five carries totaling 28 yards in romp of rival Florida State (Sept. 26)…Added three receptions for 35 yards against Seminoles…Totaled one carry and one reception at No. 1 Clemson (Oct. 10)…Had career-high five receptions totaling 27 yards in win over Pittsburgh (Oct. 17)…Finished with seven carries against Panthers…Posted 12 carries in win over Virginia (Oct. 24)…Rushed five times in come-from-behind win at NC State (Nov. 6)…Finished with 27 rushing yards in win at Virginia Tech (Nov. 14)…Made second start of career in road win at Duke (Dec. 5) but left game early due to injury that kept him out for remainder of season.

High School: A consensus four-star prospect by 247Sports, ESPN and Rivals…Rated No. 146 in the Rivals Top 250…Ranked the No. 5 running back nationally and No. 25 player in Florida by Rivals… Listed as the No. 88 player in the ESPN300…Rated the No. 11 running back nationally and No. 15 player in Florida by ESPN…Ranked the No. 104 player nationally by 247 Composite…Listed as the No. 10 running back in the country and No. 19 player in Florida by 247 Composite…Selected to participate in 2020 Under Armour All-America Game…Participated in The Opening in the summer of 2019…Helped lead Deerfield Beach to the semifinals in the Florida Class 8A state playoffs…Finished the 2019 season with 1,414 rushing yards and 19 rushing touchdowns, averaging 9.7 yards per carry, while adding 13 receptions for 267 yards and two touchdowns…Ended career as all-time leading rusher in Broward County history with 5,150 yards…Chose Miami over offers from Alabama, Auburn, Clemson, Florida, Florida State, Georgia, Illinois, Iowa, Kentucky, Louisville, LSU, Michigan, Missouri, NC State, Nebraska, Ohio State, Oklahoma, Ole Miss, Oregon, Penn State, Purdue, South Carolina, Syracuse and Tennessee, among others.