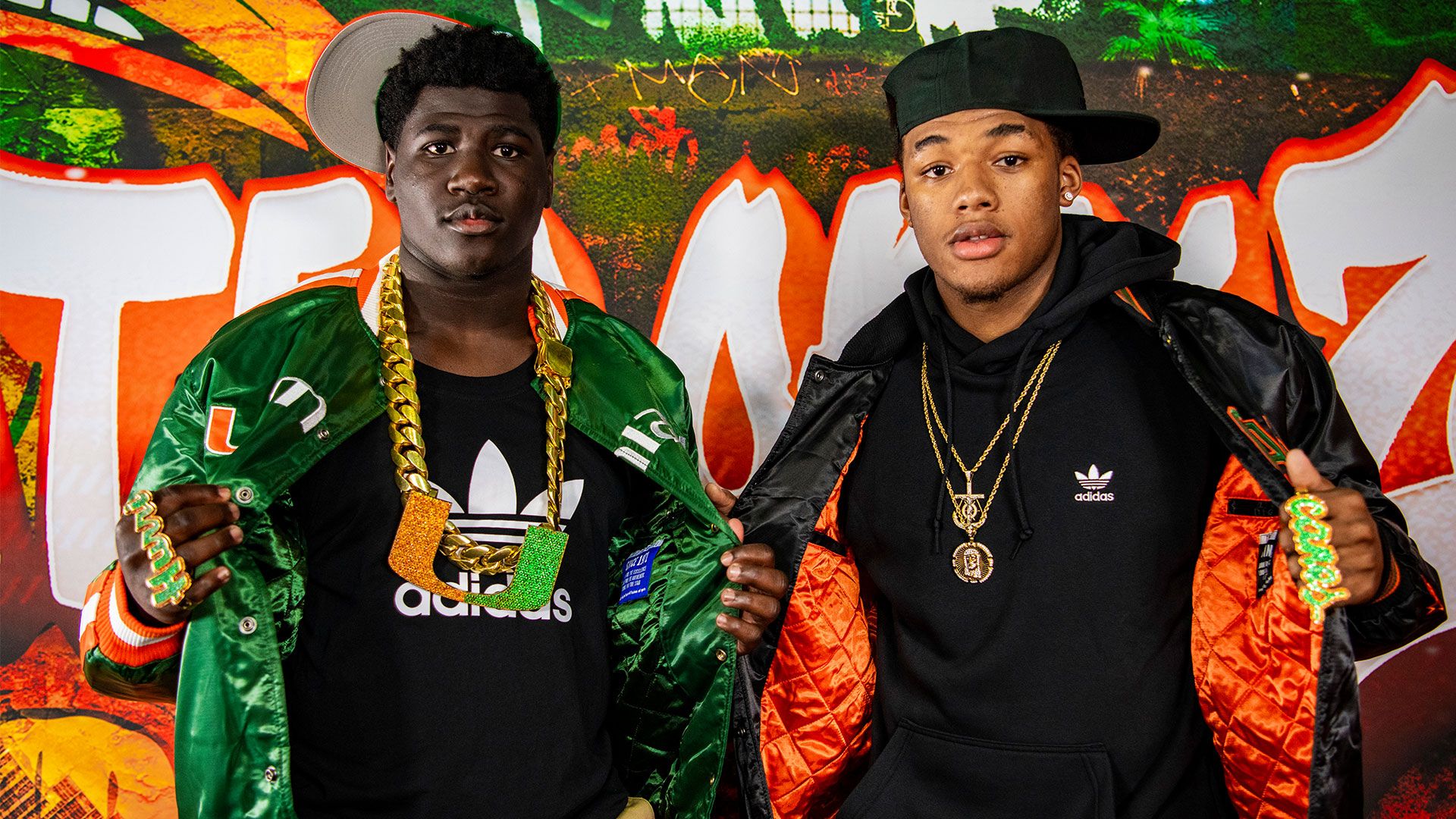 CORAL GABLES, Fla. – They have, of course, made the typical freshman mistakes.

Sometimes they’ve rushed a play or two. Blocking schemes are still being mastered. Even adjusting to the speed of the college game or getting used to the physical rigors of playing in an up-tempo, fast-paced offense have been challenges.

Still, it hasn’t taken long for freshmen running backs Donald Chaney Jr. and Jaylan Knighton to make an impression on both their new coaches and their veteran teammates.

In Miami’s first scrimmage of preseason camp a little less than two weeks ago, the young backs combined for 183 yards and a pair of touchdowns. A week later in the second scrimmage their individual numbers may not have been as flashy, but each still found his way into the end zone. 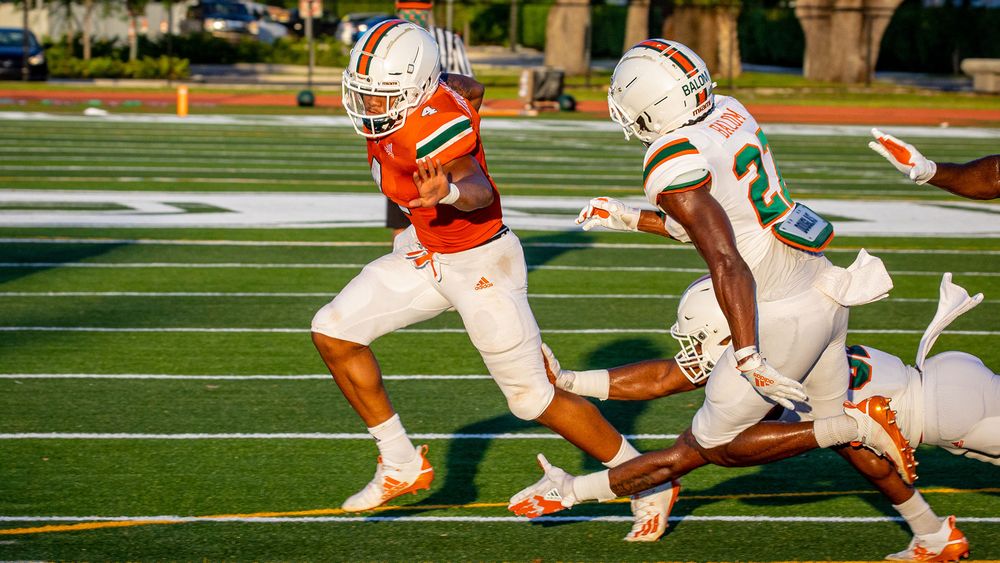 In both scrimmages, in their own ways, Chaney and Knighton showed, again, the impact they can make, even as freshmen. And they made it known that when the Hurricanes take the field Sept. 10 for their season opener against UAB, they’ll have a formidable group of backs ready to shine in Rhett Lashlee’s offense, especially as the two youngsters continue working with and learning from veteran back Cam’Ron Harris.

“The running backs room is a talented room. We’ve got some guys that can really play some football in there,” running backs coach Eric Hickson said. “Both of the young guys, they’ve got to continue being great at the small things consistently and I think both of them will be fine. It’s not about who’s in front or who’s in back. My whole deal is right now, we all need to learn what’s going on. We’ve all got to get on the same page. We’ve all got to continue working hard and we’ve all got to believe that we can get it done whenever our number’s called.”

Those are challenges both Chaney and Knighton are embracing as they opener draws closer.

For Chaney, who arrived at Miami nursing a shoulder injury, there’s been plenty of rehabilitative work to get healthy. Then there was the adjustment to a new offense, one that moves significantly faster than the system his team ran in high school.

“Probably my biggest transition would be [that] we run the air-raid, so it’s ridiculous. The amount of conditioning we have to do is a crazy amount and me being hurt, I wasn’t really in for it,” said Chaney, who totaled 19 carries for 105 yards in Miami’s two preseason scrimmages. “I was sitting there like, ‘Oh, man, this is going to be easy. It’s going to be like this, this and that.’ Then the first day of practice, it really hit me and I was like, ‘Okay, I need to focus more on conditioning. It’s gotten a lot better. But before, it was real, real hard.”

The two backs – who each starred at different high schools in different South Florida counties – have relied each other as they’ve tried to navigate the learning curve.

They also understand their different skill-sets complement each other and will, together, be a boost for the Hurricanes.

The 5-foot-10 Chaney, a former four-star prospect and U.S. Army All-American has the size and strength to bowl over defenders, something he managed to do in both of Miami’s preseason scrimmages.

Knighton, meanwhile, stands at 5-foot-10, 190 pounds and can get past defenders with his blazing speed. During one of Miami’s scrimmages, he was clocked at 21.9 miles per hour and he jokes that he may have to challenge fellow speedster D’Eriq King, Miami’s quarterback, to see which one of them is faster.

Power and speed. Speed and power. They’ve become a mantra of sorts for both freshmen.

“We’re pretty coordinated with each other. If one doesn’t have it, the other one has it . . . We're kind of the same back."

“With me and Don, I feel like me and him are similar in many ways,” said Knighton, who has rushed for 169 yards and two touchdowns in the two scrimmages. “Don has more size-wise, but power and speed, that’s what we both have. With both of us having that, it’s kind of hard to stop it because if Don breaks one with power, I come back with speed. Or we both come back with power and speed at the same time.”

Added Chaney, “We’re pretty coordinated with each other. If one doesn’t have it, the other one has it, if you get what I’m saying. … I would say we’re kind of the same back. Like, if I said one is missing something, the other has it and that’s very useful for this offense.”

Neither Chaney nor Knighton know all that the season will bring them. They simply know they’ve seen fellow South Florida backs like Duke Johnson, Travis Homer and now Harris shine in recent seasons for the Hurricanes.

Now, they’re ready to do their part and follow in the steps of the greats who ran before them.

“When you get that opportunity, you have to make the most of it. I talked to like Frank Gore and those great backs and they told me when they got the opportunity, they made the most of it,” Chaney said. “So what’s what me and Jaylan and everybody else are going to have to do.”