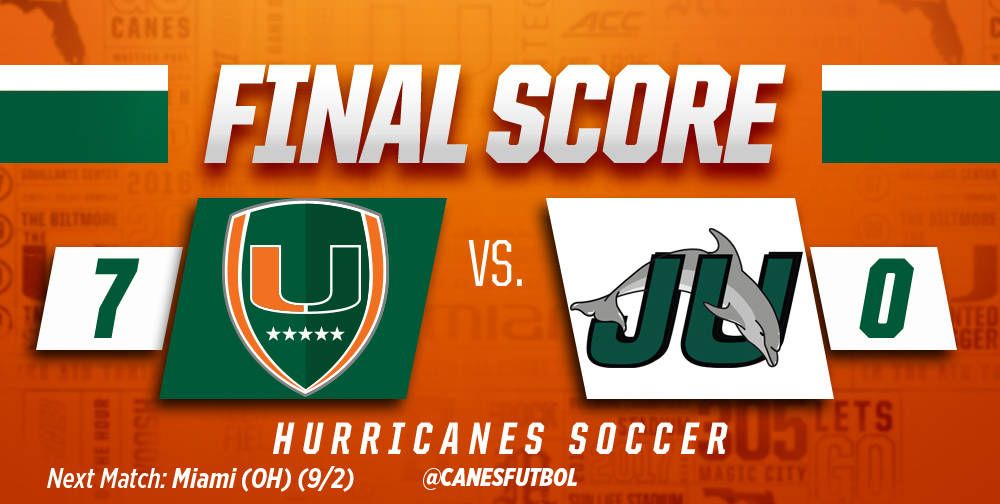 CORAL GABLES, Fla. – Prior to 2016, the University of Miami soccer team had never scored seven goals in a match twice in one year.

After a 7-0 triumph against Jacksonville (1-3-0) Sunday afternoon at Cobb Stadium, Miami (3-1-0) has now done so two times in just four matches to begin the season. The Hurricanes also tied the program record for largest home margin of victory, matching a 7-0 win over Stetson in 2002.

Miami had three players record two goals in a match for the first time ever, as starting forwards, junior Ronnie Johnson, freshman Kristina Fisher and senior Gracie Lachowecki, all tallied braces. Freshman forward Dejah Cason notched three assists after the intermission to set a school record for a second half.

“We went into halftime [and I said], ‘Let’s take the pressure off ourselves. Play what you see,’” Miami head coach Mary-Frances Monroe said of the offense clicking in a six-goal second half. “I think we had everyone trying to do something really special in the middle of the field in our attacking. I said, ‘Just take the pressure off yourselves, connect your passes and the goals will come.’”

Miami scored the first goal of the match in the 13th minute off a set piece. Redshirt senior defender Shannon McCarthy played an outstanding ball to the far post and Johnson slotted it past Jacksonville junior goalkeeper Sara Wicks.

The Hurricanes had several more chances throughout the half, but each time, Wicks was up to the test, posting six saves in the opening 45 minutes.

Early in the second half, Miami doubled its lead after an outstanding individual effort from Fisher. After making a run from near midfield into the box, Fisher was taken down in the box and a yellow card was shown to Jacksonville freshman defender Kayla King.

A penalty kick was awarded to the Hurricanes and it was Fisher who stepped to the spot and buried the ball in left the side of the net to make it 2-0 in the 51st minute.

Johnson earned her second goal of the match in the 54th minute, giving her the first brace of her career.

After a takeaway by McCarthy near midfield, the ball was played to Cason and she found Johnson, who sent a vicious shot past Wicks to give Miami a 3-0 edge. The assist marked the first point of Cason’s young career.

“[Instead of] trying to find the perfect pass, the perfect seam or the perfect anything, I just said, ‘When you have three inches, take a shot and let’s see what happens,’” Monroe said of Johnson’s performance.

Another spectacular individual play by Fisher, the reigning NSCAA College Player of the Week, led to Miami’s fourth goal of the contest.

Fisher, a native of Jupiter, Fla., dribbled through the Jacksonville defense and into the box before shooting low past Wicks to push the Hurricanes’ advantage to 4-0.

“We decided to put her in the midfield so she had a little bit more space to run into,” Monroe said of Fisher’s play. “It just felt like we kept giving the ball away in the midfield and I knew that she would contribute on the attacking side and attack through the midfield. So, [those were] just fantastic individual efforts taking players on and then getting around them towards the goal.”

Senior forward Gracie Lachowecki stretched Miami’s lead to 5-0 in the 81st minute, sending a shot upper 90 on the left side of the net off a pass from Cason.

The same duo teamed up for another goal just two minutes later, with Cason playing the ball from the endline into the middle of the box for Lachowecki to finish.

“It was great. Gracie has a lot of pressure on her and we say, ‘Take the pressure off. I don’t want you to think you need to score goals,” Monroe said. “If you start thinking that, you start putting too much pressure on yourself. Play what you see, combine off players and the goals are going to come, and that’s what she did in the second half for us.”

Freshman midfielder Lauren Markwith scored her second-career goal on a header in the 88th minute off a superb cross from sophomore midfielder Jamie Brunworth, who logged her first point of the year. Redshirt freshman defender Camie Kelton was also credited with an assist on the play.

Freshman defender Hannah Marwede made her career debut for the Hurricanes, while sophomore forward/midfielder Hanna Droh saw her first action of the season.

Redshirt sophomore goalkeeper Phallon Tullis-Joyce moved to 3-1-0 on the season after making two saves in 69-plus minutes of action. Redshirt junior goalkeeper Catalina Perez went the rest of the way and helped preserve the shutout with an acrobatic leaping stop in the 84th minute.

Miami, which has three shutouts already in 2016, finished the match with a 34-7 advantage over Jacksonville in shots, including a 19-3 edge in shots on goal.

Through four matches, Miami has outscored its opponents by 16 goals, 18-2. The 18 goals are a program high after the first four contests of a season.

The Hurricanes return to the field Friday at 7 p.m., when they welcome Miami (OH) at Cobb Stadium.