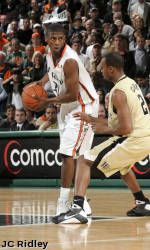 CORAL GABLES, FLA… – The University of Miami men’s basketball team opens the 2009-10 season at home on Saturday versus North Carolina Central. It is the second meeting between the programs and the 45th time the Hurricanes have opened the season at home.

Miami is 5-0 in season openers and 5-0 in home openers under sixth-year head coach Frank Haith, including a 96-60 win over Florida Southern one year ago in UM’s 2008-09 opener.  The Hurricanes have won their last five home openers by an average of 27.4 points per game. Overall, the Hurricanes have won 16-straight season openers and 10-straight home openers, dating back to an 85-53 win over Florida Atlantic on Nov. 26, 1993, at the Miami Arena.

The Hurricanes lead the all-time series versus the Eagles, 1-0. The teams met for the first time less than one year ago on Jan. 3, 2009, at the BankUnited Center, resulting in a 76-42 UM win.

James Dews scored a game-high 16 points — including a career-high tying four three-pointers — to lead four Hurricanes in double figures in the 2008-09 win over the Eagles. DeQuan Jones added a career-high 11 points and five rebounds, while Dwayne Collins finished with 10 points. Cyrus McGowan pulled down 10 rebounds, as UM dominated the boards, 53-34. Vincent Davis had a team-high 10 points for North Carolina Central.

North Carolina Central (0-1) travels to Coral Gables for its second-straight road game to face its second-straight ACC opponent. The Eagles opened their 2009-10 season in Chapel Hill on Wednesday, falling 89-42 to NCAA champion North Carolina. C.J. Wilkerson led the visitors with a team-high 16 points, including a 7-of-11 effort from the charity stripe. The Eagles were held to 25.5 percent shooting from the field and 55.6 percent from the line.

Scott converted 6-of-8 field goals and all four of his free throw attempts. Senior Cyrus McGowan added 14 points on 5-of-7 shooting — including a 2-of-3 mark from long range — and five rebounds, while senior Adrian Thomas contributed 12 points on 4-of-7 three-point shooting and five boards. Senior Dwayne Collins posted a game-high five blocks.

RAISING ‘CANES
Six of the 13 players on the Miami roster will be making their regular-season debut in a Hurricanes uniform versus North Carolina Central on Saturday. With four seniors on the squad — including graduate student Adrian Thomas who will be competing in his FIFTH season opener on Saturday — Miami certainly has veteran experience, however the newcomers are expected to make an immediate impact for the ‘Canes.

It is the greatest influx of new faces since UM welcomed seven new players to the roster in 2006-07 — including then-freshmen Dwayne Collins and James Dews, as well as Jack McClinton, who was coming off a redshirt year after transferring in from Siena. Just one season later, the Hurricanes were dancing into the second round of the NCAA Tournament.

Miami’s heralded 2009 recruiting class — freshmen Durand Scott, Garrius Adams, Antoine Allen and Donnavan Kirk — was ranked among the nation’s top 25 by both ESPN and Scout. It is Haith’s second Top 25 recruiting class in his first five years at the helm of the Miami program. In 2005, he signed four four-star recruits — including Thomas — for a class that was ranked No. 12 in the nation by Scout.