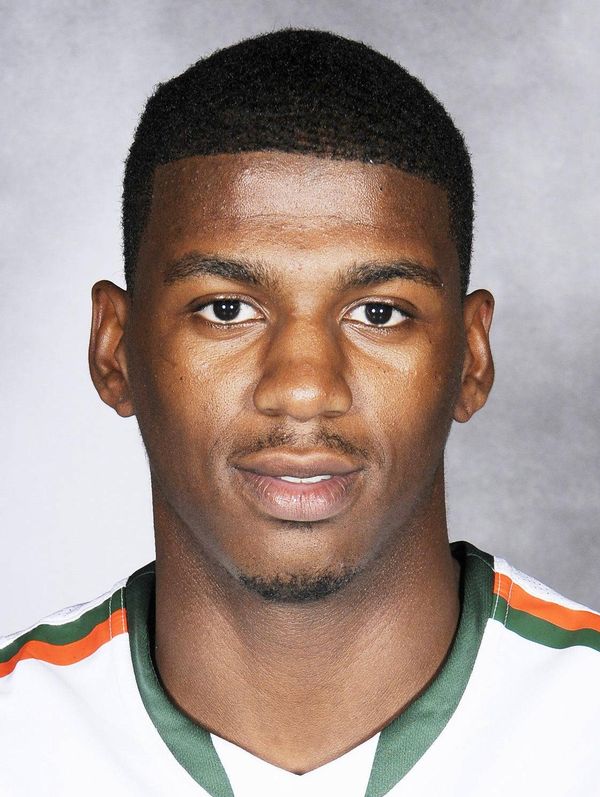 Dunked his way to the semifinals of the 24th Annual State Farm College Slam Dunk & 3- Point Championships at the Final Four … In 23 games, averaged 5.9 points, 3.6 rebounds, 0.6 steals, 0.5 blocks, 0.4 assists and 17.3 minutes per game … Shot 45.1 percent from the field and 62.0 percent from the line … In ACC play, averaged 6.2 points and 3.5 rebounds in 18.1 minutes … Led (or tied) for team game highs in blocked shots six times and rebounds once … Scored in double-digits twice … Started a pair of games … Season highs include 11 points vs. Appalachian State, five free throws made at Maryland, eight rebounds at Duke and vs. App State, three assists vs. FSU (2/26), three steals vs. Minnesota, three blocked shots vs. Virginia Tech and 31 minutes vs. Maryland … In September was told he would not participate in competition during the 2011-12 men’s basketball season as the NCAA and University continued their joint investigation. Became eligible to play on Dec. 21 and played at Charlotte the next night.

Played in 28 games with 10 starts, averaging 4.5 points and 2.5 rebounds per game, converting 41.9 percent from the field… Grabbed five-or-more boards five times, including in NIT quarterfinal effort at Alabama (3/23)… Versus the Crimson Tide, poured in a season-high 12 points on 4-of-8 shooting from the field – including a few highlight-reel dunks, with five rebounds and a career-high three steals in a season-high 30 minutes… Put up a season-high three blocks and grabbed a pair of steals in the NIT second-round win over Missouri State (3/21)… Pulled down six rebounds in 12 minutes versus Virginia (3/10) in the ACC Tournament win… Grabbed three boards in 10 minutes of action at Georgia Tech (3/6)… Strong effort in road win at Boston College (2/23), converting his first four field goals en route to eight first-half points, three rebounds and a season-high tying pair of assists… Second-straight start and 10th of season versus Clemson (2/20)… Returned to the hardwood on Feb. 13 versus No. 5/5 Duke after missing seven games after sustaining a broken right hand during the Jan. 15 win over Boston College… Back in the starting lineup at UNC Greensboro (2/15) for the first time since returning to the hardwood after the injury, posting four points, five rebounds and an assist in 18 minutes… Focused on defense the ACC opener at No. 1 Duke (1/2), playing a season-high 30 minutes… Contributed eight points with three boards, a season-high pair of blocks and a steal in the Las Vegas Holiday Hoops Classic victory over Oral Roberts (12/21)… Slammed down three dunks en route to nine points on 4-of-6 shooting from the field and 1-of-1 shooting from the line with a pair of boards and an assist versus UCF (12/18)… Solid showing in win over Stetson (12/12), contributing eight points, six boards, a season-high two assists, one block and one steal in 19 minutes… Posted six points on 3-of-4 shooting, with four rebounds in the win over Ole Miss (11/30)… Finished with a season-high 10 points on 4-of-6 shooting from the field and 2-2 shooting from the line in the win over McNeese State (11/24)… Scored eight points on 4-of-7 shooting at Rutgers, with two rebounds, a block and a steal (11/21)… Finished with nine points and three boards against North Carolina Central (11/19)… Grabbed a career-high eight rebounds in the season- opening win over Jacksonville (11/12).

Played in 28 games, starting 20 as a sophomore… Came on strong during the ACC Tournament, averaging 11.7 points — on 48.1 percent shooting from the field and a team-high 50.0 percent from beyond the arc, with 3.3 boards and 1.0 block through Miami’s three-game run… Registered his fourth consecutive start in the ACC semifinal against Duke (3/13), finishing with seven points, two rebounds and a blocked shot… Posted his second-straight 14-point scoring effort on a career-high tying 6-for-11 shooting from the field with four rebounds and a block versus Virginia Tech (3/12) in the ACC Tournament quarterfinal… It marked the first back-to-back double-digit scoring performances of his career… Finished with 14 points, connecting on 5-of-7 field goals – including a career-high two three-pointers, with four rebounds, a block and a steal in the ACC Tournament win over Wake Forest (3/11)… Scored 12 first-half points — including both three-pointers — to set a career high for points in a half… For the season, averaged 5.7 points and 2.1 rebounds per game, while shooting 53.3 percent from the field… In the regular-season finale versus Florida State (3/6), picked up his first start since Jan. 16, going on to finish with six points — including a perfect 4-of-4 performance at the charity stripe, a rebound, a block and a steal… Hit a pair of baskets — including a break-away slam dunk capping an 8-3 UM run early in the first half — adding a rebound off the bench in Miami’s home win versus Virginia Tech (1/31)… Turned in six points and two rebounds at Maryland (1/26)… Finished with eight points on 4-of-5 shooting from the field, with three rebounds and a block at Virginia Tech (1/13)… Scored seven points — including a three-pointer — and grabbed a season-high two steals in the road win at Pepperdine (1/3)… Finished with nine points on a perfect 4-of-4 outing from the field, with two rebounds and two blocks at Stetson (12/16)… In that game, electrified the crowd with an alley-oop dunk off a feed from Malcolm Grant with 15:42 remaining in the second half… Scored eight points with two rebounds and a season-high three blocks in the victory over South Carolina State (12/12)… Finished with eight points (3-4 FGs, 2-2 FTs), four rebounds and an assist at Boston College (12/6)… Dished out a career-high three assists versus USC Upstate (11/28)… Scored a career-high 16 points on a career-high tying six field goals (6-8 FGs), including a three-pointer, and grabbed five rebounds in a win over Florida Gulf Coast (11/25)… Finished the night a perfect 4-for-4 shooting from the floor – – including a thunderous dunk early in the first half — on his way to eight points, five boards (all defensive), two assists and a blocked shot against South Carolina (11/22) in the championship game of the Charleston Classic… Finished with nine points on 4-of-6 shooting with a season-high tying six rebounds in the win over Nova Southeastern (11/16).

Played in all 32 games, making three starts as a true freshman — including back-to- back ACC contests at then- No. 5/6 North Carolina (1/17) and versus Florida State (1/21)… Had an electrifying reverse dunk in the first half at then- No. 5/6 North Carolina (1/17) that landed at No. 1 on ESPN’s Top 10 Plays of the day… Finished with eight points, a then- season-high tying five rebounds, a blocked shot and an assist versus the Tar Heels in a career-high 27 minutes… Posted four-or-more rebounds seven times… Grabbed a season-high six boards, a blocked shot and a steal in 11 minutes at then- No. 3/4 Duke (2/7)… Contributed three points, a pair of rebounds, a blocked shot and a season-high tying two steals in the win over then- No. 6/7 Wake Forest (2/4)… Scored a career-high 11 points and added five rebounds, an assist, a steal and a blocked shot in 21 minutes versus North Carolina Central (1/3)… Saw a season-high 24 minutes on the hardwood in his first collegiate start versus North Florida (12/31), finishing with eight points, five rebounds, a season-high tying two assists and a blocked shot… Ranked fifth on the team with 12 blocked shots, including a season-high four in the rout of FIU (12/12)… Also added three points, three boards, a steal and an assist in 15 minutes versus the Golden Panthers… Ripped down an offensive rebound and put it back for a dunk in his postseason debut at Providence (3/18)… Dished out a career-high tying pair of assists in the NIT second-round game at Florida (3/20)… Hit seven points on a 3-for-4 performance from the field and a free throw at Maryland (1/31)… Converted his first three-pointer as a Hurricane versus Virginia Tech (1/25)… Scored six points on a season-high tying three field goals on a perfect 3-of-3 touch from the field against Florida Atlantic (1/5)… Finished with four rebounds and two points in his ACC debut versus Clemson (12/21)… Converted all of his shots from both the field (1-1) and the free throw line (2-2) for four points against Ohio State (12/2) in the ACC/Big Ten Challenge… Finished with six points, four rebounds, one blocked shot and one assist in 19 minutes against San Diego (11/24)… Saw 16 minutes of action vs. No. 2/2 UConn (11/23) in the Paradise Jam semifinals, finishing with four points and a rebound… Posted seven points, two assists, a rebound and a steal in his Hurricanes debut versus Florida Southern (11/15).

High School
Averaged 15.2 points, 6.7 rebounds and 4.0 blocks per game as a senior en route to Class 5-A Player of the Year honors by the Atlanta Journal-Constitution and Northwest Player of the Year accolades… Also named to EA Sports’ All-America Second Team and to the Parade All-America Fourth Team… Ranked as the nation’s fifth-best small forward and 28th-best overall player by ESPN.com… Considered a five-star recruit by both Scout.com and Rivals.com… Ranked fourth among small forwards by Rivals.com… Helped Wildcats finish 30-3 with a No. 18 national ranking by USA Today… Team advanced to the state title game, where the Wildcats lost by just three points… Scored 17 points in the semifinal win over Hiram to help Wheeler advance to the finals… Region 6A champions in 2008… Participated in the iS8/Nike Spring High School Classic, earning second team honors… Played three years of varsity basketball… Competed in first two seasons of prep basketball at Stone Mountain… Coached at Wheeler by Doug Lipscomb… Played AAU basketball for the Worldwide Renegades.

Personal
Born June 20, 1990 … Son of Irene Bell and Clady Jones … Brother to Camron … Majoring in liberal arts … Nickname is “DJ”… The most explosive athlete on the squad with dynamic hops… Good mid-range game… Has all the physical tools to succeed…. Also recruited by schools including Oregon, Memphis, Florida and Georgia.