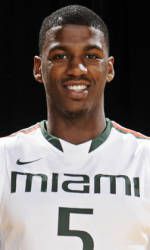 I was raised on the east side of Atlanta, Stone Mountain to be particular. I grew up very involved in sports.

I started playing basketball when I was a kid, like six or seven years old. I always liked the sport but I didn’t get serious about basketball until I was 15.

My favorite holiday is Halloween, because you get free candy.

Nobody knows that I can cook. I’m very skilled in the culinary arts. I can make a number of things, like baked chicken, spaghetti, just the usual. Then I can go into steak, depending on how you want it cooked. I just recently learned how to sauté and marinate steak. For Memorial Day, I marinated steak for like three days and baked it, then put it on the grill to give it that smokey taste.

To be a Miami Hurricane means it’s always you against the world.

The oddest nickname I’ve ever had is G-Money. My uncle gave me that nickname.

If I wasn’t playing basketball I would be an entrepreneur. I would be in the beginning stages of starting my own business.

When I was younger I wanted to be either a Power Ranger or an NBA player, so it was pretty cut and dry for me.

My favorite UM athlete is Sean Spence. The kid is phenomenal. He’s a beast.

The U is very family-oriented. It’s a close-knit community. Everyone is in-tune and close with each other.

I’m afraid of the little lizards you see running around when you’re walking to class.

One thing everyone should know about Miami basketball is we work extremely hard and we’re extremely dedicated to bringing positive results to the school.

In March I want to still be playing.

My favorite quote is “the harder you work during peace, the less you bleed during war.” My high school coach used to always tell us that, but he was known for always taking other people’s words, so I don’t really know where it originated from.

Before every game I like to relax and unwind. Usually I’ll go to a movie or do something relaxing to get my mind and my focus off of the game.

My favorite midnight snack is eating cereal. I feel like cereal is the perfect balance of food and hydration (laughs).

Coach Larranaga is probably one of the most upbeat and energetic coaches I’ve ever played for. He knows exactly how to get the best out of all of his players.

My favorite movie is Antwone Fisher, because it moves you on so many different levels. It really taught me how that you never really know what type of person you are dealing with or other people’s experiences until you know what type of obstacles they’ve overcame to get to where they are now.

The actor I would want to play me in a movie is Soulja Boy (laughs). Just kidding. I would say Denzel Washington probably because he’s the greatest actor of my lifetime.