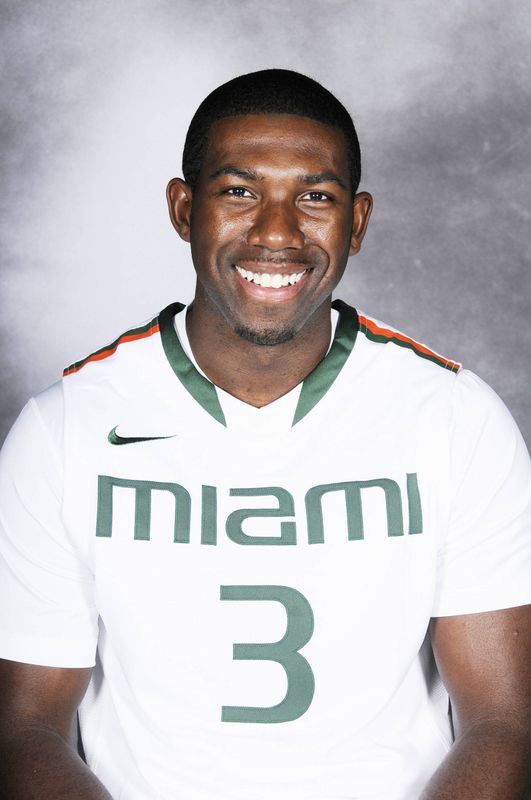 Preseason All-ACC … Ranked third in the ACC in three-pointers made per game, fourth in three-point percentage and 25th in scoring in the ACC … Made a three-pointer in 35- straight games from the Dec. 30, 2009 outing against Pepperdine through the Jan. 7, 2012 game at Virginia. His 35 tie the Miami school record with former Cane Jack McClinton. The 35 also is the 11th-best in ACC history, tying Grant with J.J. Redick (Duke) and McClinton … Led the Canes in three-pointers made and second on the team in free throw percentage and minutes played … In 31 games played, averaged 10.8 points, 2.1 rebounds, 1.9 assists and 0.7 steals in 28.7 minutes per game … Missed the game at Charlotte and vs. Appalachian State due to a death in the family … Shot 33.9 percent from the field, 33.0 from long distance and 80.3 at the line … In ACC play, averaged 9.2 points and 2.0 three pointers made per game in 16 outings … Scored 21 points in two games in the ACC Tournament, hitting five from long range and going 4-of-4 at the line … Led (or tied) for team game highs in scoring and assists seven times and steals six times … Recorded double-digit points 15 times and knocked down multiple threes in 20 games … Tallied an assist in all but five games … Season highs include 22 points at Ole Miss, six treys made at Ole Miss, seven free throws vs. FGCU, six rebounds against Maryland, six assists vs. Wake Forest, two steals seven times and 42 minutes vs. Florida Atlantic.

Among five Hurricanes to play in all 33 games, making eight starts… Led the team in assists with 3.5 per game and was fourth in scoring with 9.6 points an outing… Converted 40.0 percent of his three-pointers against ACC opponents… Hit a three-pointer in the first 14 games this season — tying for the 10th longest streak in UM history — and in 28-of-33 games as a Hurricane… His 61 three-pointers ranked second-most on the team, as he hit multiple treys in 21 games — including eight outings with three-or-more from long range… 21 games with four-plus assists… Sixth in the ACC in assist-to-turnover ratio (1.77:1)… Versus ACC opponents, ranked fourth in the league in assist-to-turnover ratio (1.97:1), tied for seventh in three-pointers made per game (1.8) and 10th in assists per game (3.6)… Over the ACC Tournament, registered a 2.6-to-1 assist-to-turnover ratio and shot 45.5 percent from beyond the arc… Dished out four-plus assists in eight of the last 10 games… Second most efficient free throw shooter on the squad, converting 75.6 percent for the season and 87.5 percent (21-24) over the last seven games, including making his last 13-straight free throws for the season… Scored in double figures 14 times — second most among returning players in 2010, including finishing with 17 points (3-5 3FGs) — with a perfect 6-of-6 effort from the line, team-high four assists and two rebounds versus Duke in the ACC Tournament semifinals (3/13)… Turned in nine points — going 4-of-4 at the charity stripe — with a team-high four assists in the ACC Tournament win over Virginia Tech (3/12)… Registered nine points and a game-high tying five assists versus Wake Forest (3/11)… Finished with 12 points, a then- career- and game-high eight assists, a season-high tying five boards and a season-high tying two steals at North Carolina (3/2)… Those eight assists pushed him over the century mark, making him the 13th Hurricane (and second active with Durand Scott) to dish out more than 100 assists in a single season… Scored in double-figures for the second-straight game with a team-high 13 points (5-10 FGs), a team-high four assists and a steal at Clemson (2/13)… Recorded 11 points (3-6 3FGs), a game-high five assists, three boards and a steal in Miami’s win over then- No. 20/20 Georgia Tech (2/10)… Recorded 13 points (3-4 3FGs) in the win over Virginia Tech (1/31)… Finished with 11 points, a game-high five assists and a steal against Boston College (1/19)… Dished out five assists with zero turnovers — for the second time this season — at Virginia (1/16)… Contributed 14 points (3-6 3FGs), six assists, three rebounds and a block in a win over Wake Forest (1/9)… Game-high tying four assists, a season-high tying two steals and his first career block at Pepperdine (1/3)… Registered a game-high tying 14 points, four rebounds and a game-high five assists against North Carolina A&T (12/21)… Finished with nine points, two rebounds and game- high tying four assists against zero turnovers — his third multi-assist game with no turnovers in the last five contests — at Stetson (12/16)… Dished out six assists against South Carolina State (12/12)… Posted a season- and game-high tying 18 points, shooting 6-of-11 from the field — with a season-high tying four three-pointers, and a game-high four assists in his ACC debut at Boston College (12/6)… Helped Miami erase a 16-point second-half deficit versus the Eagles, scoring eight-straight points to tie the game at 57- all with 2:26 to go… In the Big Ten/ACC Challenge win over Minnesota (12/2), scored 16 points on 5-for-8 shooting from the field — including a game-high and season-high tying four three-pointers, two assists and two boards… Finished with six points on a pair of treys and a game-high five assists with zero turnovers in the win over USC Upstate (11/28)… Recorded 14 points on 5-of-11 shooting — including a season-high tying four three-pointers — with a season-high tying five rebounds and four assists against Florida Gulf Coast (11/25)… Picked up seven points, three assists and an offensive rebound in the Charleston Classic championship victory over South Carolina (11/22)… Scored in double- figures for the third-straight game with a season-high 18 points — including two three- pointers on three attempts — and dished out two assists to lead Miami over UNC Wilmington (11/20) in the Charleston Classic semifinals… Finished with 10 points — including two three-pointers, four assists and two rebounds in the Charleston Classic first-round win over Tulane (11/19)… Among four Hurricanes to score in double figures with 17 points in the rout of Nova Southeastern (11/16) — converting 50 percent from the field, 50 percent from the perimeter and all five of his free throw attempts… Made his first start for the Hurricanes in the season-opening win over North Carolina Central (11/14).

High School
Prepped for one season at Winchendon Academy in Massachusetts… Graduated from Paul Robeson High School in his native Brooklyn in 2006… At Robeson, selected PSAL Player of the Year and named to the all-city second team… As a senior in 2005-06, averaged 23.0 points, 2.6 rebounds and 2.0 assists per game… Scored more than 1,500 career points… Coached by Todd Myles at Robeson and Michael Byrnes at Winchendon.

Personal
Born June 21, 1988 … Son of William Duncan and Mary Grant … Brother to Unique, the late Sayeed, LeVar … Sports administration major with a minor in English literature… Nicknames include MG and Malky… Off the court, enjoys playing video games and singing.