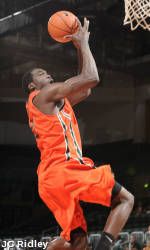 CORAL GABLES, Fla. (AP) -The Miami Hurricanes return most of their top scorers from last season, and their newcomers look as if they could have an impact, too.

“I couldn’t wait for the season to start,” said McGowan, a transfer from Arkansas. “I think we have a great team this year. We’re hungry and ready to play.”

Dwayne Collins had 18 points and a career-high 16 rebounds, and Jack McClinton also scored 18 for the Hurricanes, whose preseason ranking was their highest ever. Eddie Rios had a career-high 17 points, and Brian Asbury finished with 13.

Jones, a 6-foot-6 forward, committed a turnover the first time he touched the ball but seemed to relax in the second half, when he scored all of his points.

“It was good to see DeQuan get out there and get his feet wet a little bit,” coach Frank Haith said. “He was a little anxious early on, but all and all it was a good win for us.”

The season-opening win was the 16th in a row for the Hurricanes, including five under Haith.

Collins registered the 11th double-double of his career in only 25 minutes.

“That’s the kind of big-boy stats you want,” Haith said. “He played like he’s capable of, and that’s good to see. Having Dwyane play like that really helps us because we’ve got post presence, and I thought our guys did a good job of feeding it to him. But he was on the boards and he was very active. When he’s live like that, he’s a tough matchup for people”

Rios went 3-for-3 from 3-point range starting for injured point guard Lance Hurdle, who is expected to rejoin practice next week.

“I just felt confident coming to the game,” Rios said. “It was a new year, new season.”

The Hurricanes outscored Florida Southern 42-16 in the paint and converted 28 points off the Moccasins’ 17 turnovers.

“They’re a very good team,” Florida Southern coach Linc Darner said. “They’ve got 10 or 11 guys they can go to. That’s a big key in the ACC – you’ve got to have depth.”

John Thompson scored 10 points for Florida Southern (3-1), which faced a Division I opponent in a regular-season game for the first time since the 1991-92 season. The Moccasins shot 28 percent and were outrebounded 56-37.