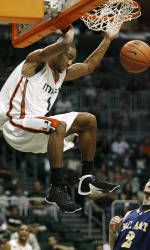 James Dews and Raymond Hicks each finished with 16 points for the Hurricanes, who are two games shy of the school record for victories to open a season set in 2001-02.

The Hurricanes opened the game on a 17-0 run in the first 5:07 and were never threatened.

The Hurricanes countered with an 18-4 run in the next 5:09. Dews scored eight points, including two 3-pointers, during the spurt.

Steven Rush’s 3-pointer and Ed Jones’ 3-pointer helped the Aggies run off eight straight points and reduce Miami’s lead to 17-8 with 12:50 remaining in the first half. But Dwayne Collins scored five points in a 14-3 spurt, giving the Hurricanes their first 20-point advantage of the half, 32-11. Jimmy Graham’s short field goal capped the run with 5:40 left.

Hurdle’s reverse layup with 3:44 remaining increased the lead to 39-15, Miami’s largest of the half.

The Hurricanes, whose non-starters contributed 54 points in the win, led by as many as 35 points and shot a season-high 58.1 percent from the field.