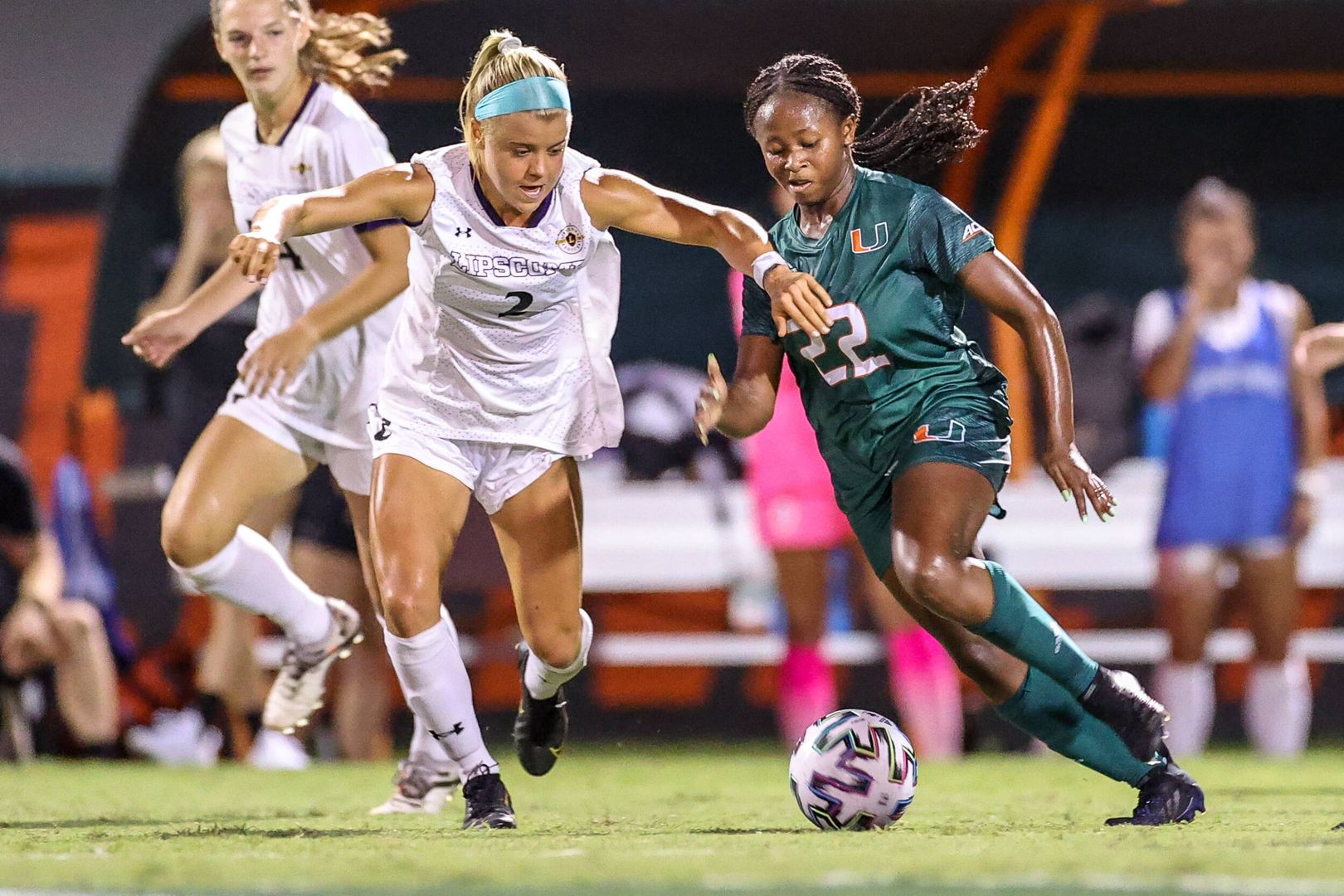 Breaking Out Of Her Shell

Her teammates and coaches describe her as “quiet.”

But make no mistake, Taylor Shell does the talking with her play on the pitch.

The 5-foot-2 dynamic dynamo plays with the heart and fight of a world-class boxer.

Battling through muscle tightness in the blistering heat of the Swamp, Shell remained composed and relentless. Shell made her third straight start to begin the season, getting the nod on the Hurricanes’ backline. Following regulation, head coach Sarah Barnes and her staff moved Shell up top.

She rose to the occasion.

Junior María Jakobsdóttir sent a picture-perfect pass, leading Shell towards the Gators’ box. Shell lunged with her right foot and slipped the golden goal into the back of the net to secure Miami’s first win over Florida since 2012.

“I saw María’s eyes light up. I made immediate eye contact with her as I was making the run. I was shouting for the ball. I had never screamed so loud for a ball,” Shell said. “I will remember this goal forever. This is definitely at the top of my list.”

“I took the mentality over the summer that this has to be the season,” Shell said. “We are trying to make our mark. We are trying to knock out the big dogs. It’s a big steppingstone for us and a big boost of confidence. We want to make this season the best season yet at Miami.”

Shell arrived on campus in the summer of 2019, alongside teammates Jaclyn Marra, Jackie Koerwitz and Emma Tucker.

A gifted goal scorer growing up, Shell had to adjust to a new role and the level of play in the Atlantic Coast Conference.

The midfielder/defender saw action in eight matches as a freshman, logging 180 minutes.

While Shell’s time on the pitch was limited on an experienced roster, she showed promise that caught Barnes’ attention.

“Her freshman year, you saw a lot of savviness. You saw her understanding of nuances of the game,” Barnes said. “She’s a soccer junkie.”

As some of the Hurricanes’ veterans graduated, Shell took advantage of the opportunity.

“We always saw moments, but the big jump was last year at the end of the season. She really played hard and was smart about how she played,” Barnes said. “She’s playing the best she’s played since she’s been here. You see Taylor lead the team with her effort, intensity, and relentlessness that she plays with. This is just the tip of the iceberg for her.”

Shell’s game-winning tally in the 100th minute in Gainesville was the culmination of countless hours of hard work and sacrifice.

She fell in love with soccer at 3 years old. She played for a YMCA team dubbed ‘Manchester United’ and has become a diehard supporter of the English club ever since.

A student of the game, in her first match at the U9 level, Shell scored an astonishing nine times. By age 10, Shell locked in on her goal of playing collegiate soccer.

As a standout on her club and travel teams, Shell caught the attention of some high-level Division I programs.

Ultimately, as a sophomore in high school, she picked Miami over West Virginia and Texas, among others.

“It was the best decision ever,” Shell said of her commitment to The U. “I knew I wanted to play in the ACC. Ever since stepping on campus, I’ve loved every minute of it. Without this university, I wouldn’t be the person I am today.”

The Richmond, Va. Native has broken out of her shell in the orange and green, becoming a beloved member of the Canes soccer program.

“Tay Tay is the girl that you go to, to just laugh. She’s always cracking jokes and one-liners. She never fails to make anyone smile,” said Tucker, who has started alongside Shell on the defensive line each of the first three games. “On the field, she’s not afraid to take on any challenge. She’s super focused, always knows what she’s doing, very aggressive and not afraid to take some down that is twice her size. She’s very calm on the ball and a very skillful player.”

A first-degree black belt in Taekwondo, the small but mighty Shell has made a massive impact on Hurricanes soccer.

As Miami heads into Thursday night’s match against Missouri, Shell is hoping the Canes can ride the momentum off of Sunday’s rivalry victory.

“That was the pivoting point for our season,” Shell said. “We know now that we can do anything, beat any team. We’re capable of gritting out last minute, last second performances.”